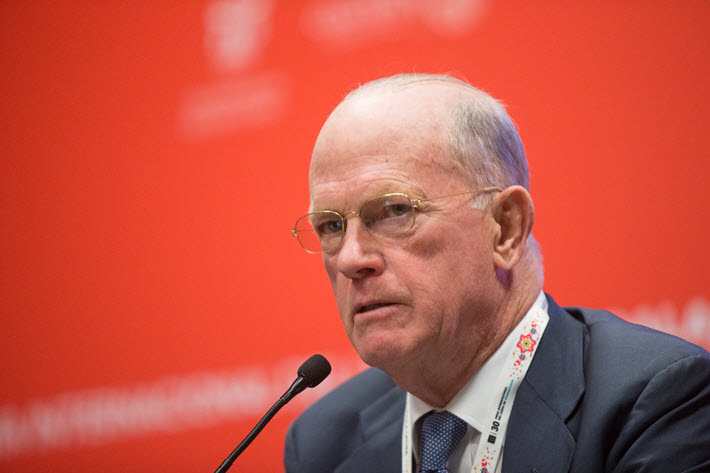 ‘If the Writing Drives You a Little Crazy’

Of the 1,100 authors The Wylie Agency represents, only 20 are Spanish-language writers—far fewer than there should be, the agency’s founder admits.

“But we’ve taken steps to address that” as part of the agency’s strategy to focus globally, Andrew Wylie tells Publishing Perspectives at Guadalajara Book Fair.

Last year Wylie tapped Cristóbal Pera, former editorial director of Penguin Random House Mexico, to head up the agency’s Spanish-language operations—to bring in and retain a new generation of writers described by Pera in October as having having “very diverse international references.”

“I think the problem with the system,” Wylie says, “and you see this in France particularly where it’s spectacularly evident, is where publishers own world rights to the authors’ books they publish, and for some reason publishers in foreign countries will not accept the word of publishers in the home territory.

“They must know something about themselves that makes them not believe other publishers,” he says. “They tend to find it more acceptable to buy books from agents. They listen to agents. And theoretically, agents have a skill to present work in a way that’s appealing to publishers.”

A focus on the Spanish-language market corresponds with a growing interest in Latin American writers. As Wylie puts it, “During the boom, Latin American writers received a lot of attention. And if you take the boom as a cannon, what’s going on now is like a series of drones: more targeted, a little quieter, a little more specific, and high-energy.” The ‘Great Benefit’ of Bolaño “It’s remarkable, after 36 years in the business, how frequently we find publishers asking in disbelief how we can consider moving an author to another publisher. It’s a critical consideration. It’s important that the author understands what the existing publisher will pay and what the market value would be if he were to leave and go to another publisher.”

Wylie acknowledges the late Chilean author as having been a big influence on writing in Spanish.

“I think Bolaño has had a very good, strong influence on young writers in the language,” he says, “and it’s been of great benefit.”

But it’s the quality of the writing that is crucial to remaining in vogue, Wylie says, rather than the agency’s pursuit of writers.

“We’re decidedly unfashionable,” he says. “We base our judgment on the quality of the work, and if the writer is really good, then we will go after the writer hammer and tong. If we think they’re good, we’ll get in touch with them.

“Pay attention to the quality of the work. If the writing is unusual, appealing, and drives you a little crazy, then that’s someone that we want to represent.”Andrew Wylie

“Many agencies only think about money. But we only look at the quality of the writing. We train people in the agency to forget about money. It’s not of interest whether we think a book will sell thousands of copies. Pay attention to the quality of the work. If the writing is unusual, appealing, and drives you a little crazy, then that’s someone that we want to represent.”

He also identifies the global approach as a key to his success.

“One thing that’s critically important is that we always think about the global picture. We’re not just thinking locally. Most agencies operate locally and trade off their foreign business to other agencies. But those other agencies don’t have time to read the books they’re handling and they’re not talking to people in a position of authority in publishing houses in their respective territories. And so the whole system doesn’t work.

“What was critical in the development of our agency was the understanding that you have to have authority in every market. So if you want authority in the Spanish-language market, for example, you have to have Borges and Bolaño, and others. You need core clients and then younger clients to give you an inroad into the territory and find out what kind of rights and terms are available in that territory.” Days of ‘The Jackal’

Called “The Jackal” for poaching writers from other agencies, Wylie says his reputation as an aggressive operator during the agency’s first decade came from his efforts to find better deals for writers he perceived weren’t represented well.

“The agent works for the writer. He’s the writer’s interpreter, business adviser, and ideally the stable element in the writer’s life—always available at the end of the phone, always ready to read and respond.”Andrew Wylie

“When we started, we pretty much had to get writers that were already represented and published,” he says. “Now we’re looking all the time at young writers, not only in Spanish, but around the world.

“When I began, I had very little idea about what being an agent involved. All I knew was that I wanted to read and represent writers I admired. I wanted the job not to be about money, but about the quality of the work I represented.

“The bestseller list,” Wylie says, “was dominated by commercial trash. Literary writers had been left out in the cold and were starving for decent representation, but it was their backlist that provided publishers with a reliable base. The works of Borges, Nabokov and Camus, etcetera, remained in print and sold steadily and the situation had to be addressed. And that was our role.”

Wylie says he now has a clearer idea of that role, and why he’s so well suited to it.

“The agent works for the writer,” he says. “He’s the writer’s interpreter, business adviser, and ideally the stable element in the writer’s life—always available at the end of the phone, always ready to read and respond. The agent is the gardener on an author’s estate.

“We’re decidedly unfashionable. We base our judgment on the quality of the work, and if the writer is really good, then we will go after the writer hammer and tong.”Andrew Wylie

“A writer is like a convict, spending a good part of their time in solitary confinement. So the writer is idiosyncratic, a-socialized, isolated, insecure.

“I have a nature that’s suited to representation. There are other professions that ask the same of the practitioner—lawyers or doctors, for example. You need to be drawn to your client’s needs. I’ve always found it easy to concentrate on and appreciate another person. I’m basically free of personality. I’m a vacuum.

“A writer sits alone in his room. It’s like a prison cell. But outside the window there’s a garden. It’s planted as he wished it to be. And in the corner, with a rake and a hoe, the agent is planting the flowers that the author has accumulated.”

For the foreseeable future, Wylie says his plan is to continue to build the agency to remain sustainable without sacrificing its quality of representation or becoming financially unstable.