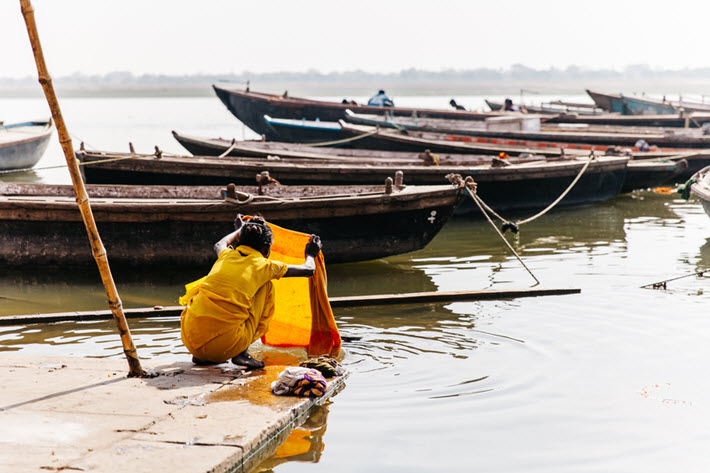 In touching commentary, the editor of more than 60 literary translations says that in Indian writings “lie our own histories, our sense of identity and belonging.” In Varanasi, where Mini Krishnan teaches and talks of “a people who are rapidly losing their languages.” Image – iStockphoto: Street Muse

‘The Memories and History of a People’

In her recent interview with Bhanumati Mishra, who teaches English literature at Arya Mahila PG College in Varanasi, a women’s school affiliated with Banaras Hindu University. The article is in The Critical Flame and discusses the state of publishing Indian translation today.

Bhanumati Mishra: First and foremost, what does translation mean to you? What drives you to publish translations of Indian writing into English? Mini Krishnan: I publish translations of Indian writing because in them lie our own histories, our sense of identity and belonging; because we need to breathe our native breath; because it is our historical duty in a largely illiterate country to preserve our words, our worlds, and slow their disappearance.

In the indigenous writing of the subcontinent lie the memories and history of a people who are rapidly losing their languages.

What better service than to retrieve and reinterpret a body of work which is emotionally important for India?

MK: I had grandiose dreams to publish English translations of modern Indian fiction, which were met with a big dip. I experimented with V. Abdulla’s translation of Malayatoor Ramakrishnan’s novel, Verukkal (Roots, 1982) and failed. Not a single member of the sales team had any interest in promoting it. Macmillan made it quite clear that there was no money for translations. So I set about looking for funding which, after seven years and many “no’s” from others, came from the MR AR Educational Society.

If ever a lowkey group influenced trends and shaped tastes it was MR AR in 1992, when they decided to sponsor the Modern Indian Novels in Translation project via Macmillan India…

BM: Why has India failed to take off on the world literary stage? India is among the few countries that doesn’t have a translation program. Is that a result of willful bureaucratic interference or a lack of national pride, or both?

MK: Indian Literature Abroad was a government venture, supported by the ministry of culture. It was the brainchild of Ananthamurthy and Ashok Vajpeyi. I was on the advisory and working panel along with Namita Gokhale and other luminaries. We even prepared an exhaustive catalogue for it.

But the program was shifted to Sahitya Akademi. In fact we do have a marvelous machinery in place: the Sahitya Akademi and the regional Academies. If they could collaborate with private publishers it would be a wonderful thing.

BM: Translation is a solitary battle. Most publishers don’t seem to care; they just want to bring out a book.

MK: There will always be an editor who cares enough to apply the brakes and do careful checks for idiom and cultural equivalence. Publishing is finally a business and has to make money. Prestige won’t put breakfast on the table.

Unless the house is committed to culture and literature and can afford to [sustain] a few losses, I’d say that publishing houses cannot be faulted for hesitating over translations. It’s why my program from 1992 to 2012 was funded by the MR AR Education Society.

Things are looking up, though. Translations are being prescribed and there are now prizes for translation. Translators are being recognized. There’s a huge market of what I call “language orphans,” who know to speak their language but can’t read it. For them, well off as they might be, translation enables a return to their roots. It may be illusory, but it is a great attraction.

The full interview can be found at The Critical Flame.