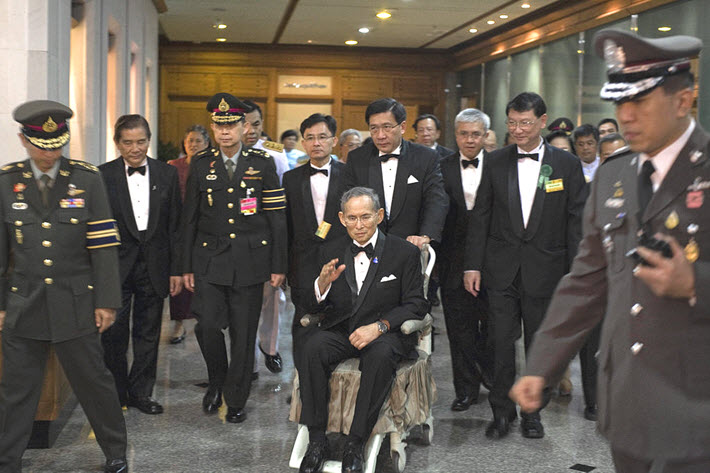 King Bhumibol Adulyadej’s writings and translations in the Thai language will be honored in a release of almost 20 volumes. Thailand’s King Bhumibol Adulyadej waves to well-wishers during a concert at Siriraj hospital in Bangkok on September 29, 2010. Image: Released by the government of Thailand. CC-BY-2.0

‘The Richness of the Thai Language’

Writing for The Bangkok Post, Dumrongkiat Mala reports that Thailand’s Ministry of Culture “plans to republish 17 books either written or translated by the late King Bhumibol Adulyadej for distribution to the public and libraries” throughout Thailand.

The king’s death was announced on October 13. He was 88 years old and had reigned for 70 years, making him the world’s longest-sitting monarch. Some of his followers saw King Bhumibol as a demi-god and his popularity has been widely credited with keeping Thailand unified during many stages of unrest. Here’s the BBC’s report on the king’s death. The literary titles now announced for republication include Canadian writer William Stevenson’s A Man Called Intrepid, which was translated by His Majesty over a three-year period. Another work on the list is The Story of Mahajanaka, written by the king and published in 1996. Another is The Story of Tongdaeng, the story of King Bhumibol’s favorite dog.

In the Bangkok Post’s report, Mala quotes the Thai minister of culture, Veera Rojpojanarat, saying, “Initially, 10,000 copies of each book will be published and the ebook version will be launched for free download.”

The goal, according to Veera, is to promote the late king’s literary talent and to make the works more widely available.

To help promote the “proper use of the Thai language,” the ministry has further declared that July 29 is National Thai Language Day, a remembrance of the 1962 meeting between the king and experts in the Thai language at Chulalongkorn University. The topic of that meeting was “issues surrounding the language.”

Veera is quoted, saying, “On July 29, 1962, at Chulalongkorn University’s Faculty of Arts, His Majesty urged everybody to be aware of the proper use of the Thai language. Surprisingly, 50 years later, many issues which His Majesty warned about remain, as many young Thais still cannot use the language properly.”

The report includes a quote from King Bhumibol in relation to that 1962 meeting: “The key issue is the richness of the Thai language. We should not think the Thai language is somehow inadequate and that we frequently need to create new words. Although some new words may be necessary for technical or academic usage, most words should remain simple. We should use the words that already exist and not add complications by creating new words.”

Minister Veera adds that the ministry will also be publishing a book of close to 500 condolence poems written by Thai artists next month.

King Bhumibol was born in Cambridge, Massachusetts, and ascended to the throne in 1946. Queen Elizabeth II of England now is the longest reigning monarch, with 64 years on the throne.

The complete report from The Bangkok Post is here.