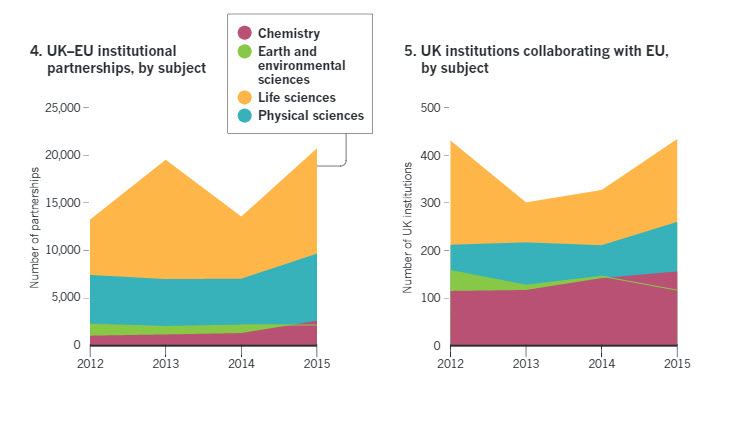 ‘Projects Have Been Disrupted’

The key finding here is that “collaboration between British and European Union scientists increased over the four years prior to the UK’s Brexit vote.” In discussion, the company says, “The index’s data show that, on average, cross-channel partnerships were producing 26 percent more high-quality research in 2015 than in 2012, with the average collaboration score, as calculated by the Nature Index, increasing from 120 to 152.

“In contrast, the score for UK collaborations with the rest of the world has remained between 40 and 50 since 2012.”

Needless to say, these observations arrive with cautionary weight for an industry worried about how Brexit’s requirement that the UK leave the European Union may affect work and profits.

The Nature Index is designed “to highlight some of the most fruitful research partnerships between countries or institutions by measuring each partner’s contribution to collaborative papers in 68 high-quality journals,” a sample selected expressly for the Index’s needs. Data comes into play from more than 8,000 institutions, in the preparation of the Index.

In what surely is politically toned wordplay, the lead article at Nature Index is titled “Collaboration Trumps Competition in City of Love.” The story, by Barbara Casassus, is about Paris and its intra-city collaborations—with a nudge to explore more city-to-city liaisons. Under the shadow of uncertainty around what Brexit might do to research partnerships between the UK and EU, the staff behind the index writes that 700 “UK institutions collaborated with EU institutions in 2015 to publish papers in the high-quality journals in the index, up from 651 in 2012.

“Overall, the UK’s strongest ties in the EU were with Germany, followed by France, Italy, Spain and The Netherlands.” David Swinbanks is the founder of the Nature Index and is quoted in a prepared statement, saying, “This Nature Index supplement shows that international collaboration is a consistent and rapidly growing feature of high-quality research worldwide.

“For the UK, this collaboration is increasingly focused on Europe.

“It’s not surprising therefore that the any uncertainty linked to Brexit is giving cause for concern.”

In addition to the UK-EU axis of research collaboration, the new supplement, dated November 17, looks at collaboration between China and the United States. Nature Index’s editor, Nicky Phillips, writes, “Collaborations between the two superpowers manifest in myriad ways. Members of the Harvard China Project, a partnership between Harvard University and several major Chinese universities, are studying how vegetation affects carbon dioxide levels in the atmosphere. Given that the United States and China are by far the world’s biggest CO2 emitters, their cooperation in understanding and mitigating the effects of global warming is essential.”

The supplement’s key story on the UK-EU question is Mark Peplow‘s “Closing the Channel of Opportunity.” He writes:

“Immediately after the referendum, research collaborations across the EU were thrown into doubt. Fearing that UK researchers would no longer be eligible for these funding streams, some EU partners started to get nervous about having them on board. Scientists for EU has logged 40 examples where Horizon 2020 projects have been disrupted, for example because UK researchers have stepped down from coordination roles.”

And in its press statement on the supplement, Nature Index writes: “A report published by Digital Science in May, Examining Implications of Brexit for the UK Research Base, estimated that Brexit could create a £1 billion funding gap for UK researchers.

“The UK’s leading universities could be among the hardest hit. Nature Index data show that the universities of Cambridge and Oxford, for example, were the UK’s most enthusiastic collaborators with other EU countries, making up 48 of the 100 most productive partnerships between two institutions (one from the UK, one from the EU) publishing papers together in top journals.

“According to Digital Science, Cambridge receives 20 percent of its academic research funding from the EU, and Oxford 23 percent.”

More information about the Nature Index is here. Imagery from the Nature Index Collaborations 2016 supplement includes this shot from a protest against the Brexit vote. “Many researchers,” the report says, “fear for the future of collaborations with scientists on the Continent.”