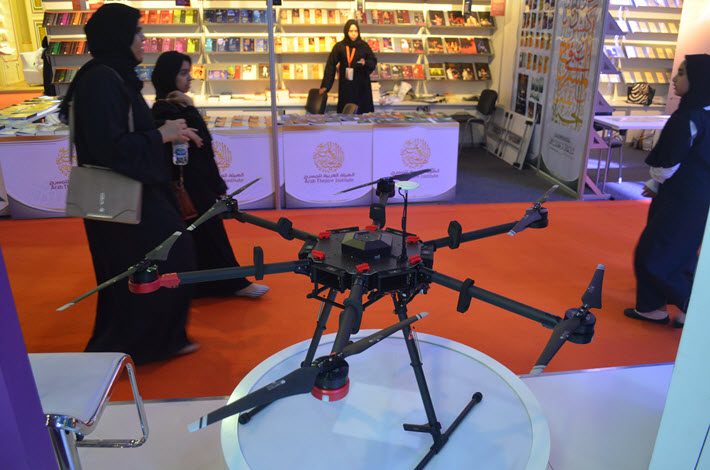 About the time the new free-trade Publishing City is expected to open in Sharjah, nearby Dubai will get a smaller Kinokuniya bookstore. And could UAE libraries some day deploy drone delivery? News from Sharjah International Book Fair in the United Arab Emirates is that attendance records are being broken in the event’s 35 year. Organizers say that more than 1.35 million visitors have attended the fair since it opened November 2, a new record. The fair stages 1,417 events this year and continues through Saturday (November 12).—Porter Anderson

The aim is to attract international publishers to establish offices in the emirate, taking advantage of a tax-free environment and Sharjah’s central location. The building is being constructed in a modern Islamic style and is seemingly rising from the desert.

While there had been hope that the project would launch late this year, Ahmed Al Ameri, chairman of Sharjah Book Authority, says it now is expected to be ready by the end of January and is to be opened by Sharjah’s ruler, Sheikh Sultan bin Mohammed Al Qasimi.

More on the project is here from Al Ameri.

One of Kinokuniya’s most famous overseas stores outside Japan is in Dubai Mall, near Sharjah. The 68,000-square-foot flagship store has traded there since 2008, but is to leave its present site at the end of the year, following a request from the new mall management, which wants to lease the space to more than one retailer.

This is a blow to the chain since the Dubai store frequently is featured on lists of the world’s top bookstores.

Santi Suntien, leading institutional and corporate sales for the company, is putting a brave face on it, although a move will mean a reduction in the store’s on-site inventory. “We’re moving to a new site in late January, early February,” Suntien tells Publishing Perspectives. “The new site has a good location—right next to Dubai Mall Metro – but it ‘ a smaller space at 38,000 square feet.

“We’re working hard to adapt the shelving, to make it higher, so that we don’t have to reduce the stock by too much, but we will lose Chinese and German language books, and there will be some reductions in areas like humanities, in psychology and philosophy. Fiction will only see a very slight reduction and children’s will be the same.”

The new store won’t have a café and although still a good size, it may lack the impact that the existing store has, with its distinctive semi-circular shape and spacious, relaxed atmosphere.  Dubai Kinokuniya has always been a very browser-friendly store.

Elsewhere in Kinokuniya’s international network of stores, the company has just opened its first ever store in Myanmar–at Yangon International Airport–and is to open two new stores in Texas, one in Carrollton and one in Plano, in December 2016 and February 2017 respectively. The two US stores will bring Kinokuniya’s US total to 12, and its overseas total to 30.

The Myanmar store is a franchise agreement with Singapore Myanmar Investco Limited.

Suntien tells Publishing Perspectives, “Our focus now is to look back in Southeast Asia and the Asia Pacific region. Range is very important to us, so we will only open when there’s a significant mall or we can get a site of the right size.” A drone of the type that might be deployed in the future by UAE libraries is on the Dubai Cultures stand at Sharjah International Book Fair. Image: Roger Tagholm

The Dubai Culture stand this week has shown a video of a drone at work and has displayed an aircraft of the kind that might be deployed by the eight facilities of the city’s library network. The model in question has six rotor blades, each a little under two feet long, and the craft is capable of lifting up to seven kilos of books.

In the video, we see a staff member at the Al Rashidiya branch in the east of the city take the title off that library’s shelf, walk outside to the drone, loading the book into a small container beneath the rotor blades, and send the drone on its way.

The delivery point in the video is depicted as the Al Mankhool branch, some eight miles away in the west of the city. We watch the drone slowly descend outside the main doors where it’s met by a library official who unpacks its little cargo of books.

There are much longer journeys between various libraries in Dubai too, and anyone who has experienced the traffic in this city will immediately see the reason why drones might be a good idea.

Dubai, however, isn’t shouting about the project yet, and staff on the Dubai Culture stand stress that it’s only in an experimental stage in cooperation with Dubai Civil Aviation.

Health and safety and security issues, of course, are a problem for anyone wishing to use drones. In late August, the Federal Aviation Authority (FAA) in the United States, published its regulations on Unmanned Aircraft Systems in that country. Those regulations bear on Amazon’s efforts to develop its “Prime Air” drone delivery, which could see drones travel up to 20 miles at speeds in excess of 50 miles per hour, according to Monica Nickelsburg at GeekWire.

James Titcomb at the Daily Telegraph has reported that Amazon’s tests, sanctioned by the UK’s Civil Aviation Authority (CAA), are centered in Cambridge. In a promotional video seen at Sharjah International Book Fair, a drone delivers an inter-library payload of books in Dubai. Image: Roger Tagholm