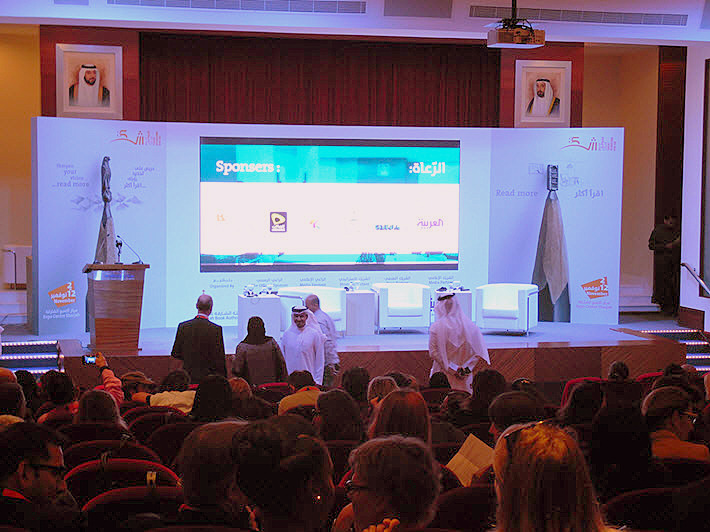 In a combination of analysis, commentary, and rights-center deal-making, the 35th Sharjah fair clarifies issues and opportunities for industry growth. And while the fair itself is said to rank third in the world for size—with more than 400 events for visitors on books and reading—it has been preceded this year by the sixth annual presentation of its Professional Program.

Staged at Sharjah’s handsome Chamber of Commerce complex, the event brings publishers, agents, and rights specialists to the city for an intensive tw0-day sequence of commentary and “matchmaking” meetings, a pop-up rights center, of sorts, aimed at encouraging deals in Arabic and world literature.

Hosted by Sharjah Book Authority and introduced by its chairman, Ahmed Al Ameri, the program opened Monday (October 31) with a brisk welcome and an overview of the Arab world markets as they’re seen by Google Play. Emphasizing the importance of mobile development, Bregman pointed out an 86-percent rate of smartphone usage by Saudi adults. “That number is the highest globally,” he said, with only South Korea as a potential contender.

“These users also make the Internet—both on phones and computers—part of their lives…for entertainment, for work, for information, for a lot of purposes. This is an amazing potential.”

“Enabling users sitting in each country without many bookstores to [use] their devices to have access to knowledge, entertainment, amazing books from the whole world.”Alexander Bregman, Google Play Books

In publishing, however, Bregman said, the opportunity couldn’t be more stark.

“Something I’ve found personally difficult to deal with,” he said, “is how few books are published in the region.” And this is largely because, Bregman said, the region’s publishers on the whole have yet to embrace the digital dynamic and its potential.

Naturally, Bregman sees the robust presence of Google Play and its provision of Android mobile products to 1.4 billion users as a logical platform “to launch Google Play Books in the region.”

“What we’re doing here is enabling users sitting in each country without many bookstores to [use] their devices to have access to knowledge, entertainment, amazing books from the whole world.”

Bregman concluded with the following video featuring Google Play and promoting the arrival of Arabic books in the Google Play Store through a partnership with Emirates Airline.

It’s worth noting that this “Year of Reading” video at press time has had enormous viewership: close to 4.5 million views since being published on October 9. Its audio is in Arabic with English captions.

Making Books Tax-Free in the UAE

What Bregman had referenced, of course, is the chicken-and-egg issue facing a region determined to engage fully and energetically in world culture: with distribution and supply chain issues, even traditional publishing in the Arab world is challenged, and despite strong Internet penetration in the UAE and other countries, digital publishing has yet to take off.

Even as the Professional Program was under way on Monday, an announcement was made of a new initiative by the UAE to shield books from VAT when it is introduced in 2018 at 5 percent. Not only will books be free of tax but the country also is promising that workers will be given time off for reading. There’s more on this angle here.

And in an informative presentation , the program next brought Toronto-based Kobo CEO Michael Tamblyn to the podium to talk about seeing ebook markets rise and coexist with traditionally based industries. Tamblyn is always an articulate speaker, frequently a funny one, and in this  case gave a thoughtful and measured explanation of Rakuten-owned Kobo’s approach. “In the seven years since Kobo was created,” he said, “we’ve had a much better idea of how digital books fit in to a print marketplace.”

Kobo is built entirely on digital. “We sell ebooks through e-commerce, mobile apps, unique storefronts…we design devices to read them on. We deliver ebooks to readers in 190 countries. We have a singular focus on one person: the reader.”

Tamblyn made the point that while Amazon’s Kindle system Apple’s iBooks and other companies are doing many things with books that Kobo does, Kobo has one classification of product: “We’re booksellers,” Tamblyn said. “We’re not transitioning customers to other products. We care about books and authors and readers, solely.”

He then reviewed what he says was Kobo’s decision years ago not to fight for market share in the USA. There were experiments in which Kobo pursued arrangements with member stores of the American Booksellers Association, but Tamblyn’s position today is that succeeding “everywhere else” has been Kobo’s goal and effort.

Echoing something of that bookseller linkage, Tamblyn said that in many countries, Kobo’s tack was to try to work with booksellers rather than displacing them? “Could we use our global scale to help booksellers be competitive in ebooks but preserve national characteristics?”

“Can we acquire from publishers a digital collection that’s both wide and deep?”Michael Tamblyn, Kobo

Another way Tamblyn likes to put this is to say that Kobo wanted to help digital be a revolution that happened with local publishers and authors and booksellers rather than something that happened to them.

And he then laid out a brief set of criteria Kobo looks for in emerging ebook markets. How much digital content is available is one factor, of course, he said. “In many countries,” Tamblyn said, “we’ve worked with publishers to find conversion facilities” to help get content into digital formats.

“The biggest digital catalogue possible” is critical, he said. “Can we acquire from publishers a digital collection that’s both wide and deep?”

Replication is a key, too, Tamblyn said, the effort being to create a digital offer that reflects what readers are used to finding in print bookstores.

A fourth criterion is an understanding of what makes a given market’s content unique. A fifth factor, Tamblyn said, is Internet penetration and the prevalence of e-commerce in a market.

The sixth and final factor he looks for to gauge a market’s propensity to accelerate in digital is disposable income: a consumer base that spends money on books and is able to support a digital expansion. Tamblyn’s talk was followed by a quick presentation from Flagship Projects CEO Shadi Al Hasan. He described the stance of audiobooks in the region and a partnership for Flagship with Jonas Tellander’s Storytel in Sweden.

In the 1960s, Al Hasan said, the Holy Koran became one of the first audiobooks in Arabic. And this indicates, he said that correct choices in what’s chosen to produce in audio format can promote success.

“The Arabic market is very promising,” Al Hasan said, for advances in streaming audio, which takes care of storage with cloud technology and can also offer sync-ups between audiobooks and ebooks. Marcia Lynx-Qualey talks of the importance of children’s literature in the Arab world. Image: Porter Anderson

Money on the Table

House took the important step of going over some of the singular factors involved in matchmaking-type events with the region’s players in the industry. Of special interest to many outside the area: Arabic rights holders are frequently keen to sign deals on the spot and will place cash on the table to cover the cost of a deal.

Exciting preparations for the 35th @ShjIntlBookFair which opens its doors tomorrow. Are you ready? #sibf16 pic.twitter.com/QsaoLaVumX

And by the time the main book fair opened on Wednesday, its roster of publishing-related stands would number around 220 in three halls at the Expo Center.