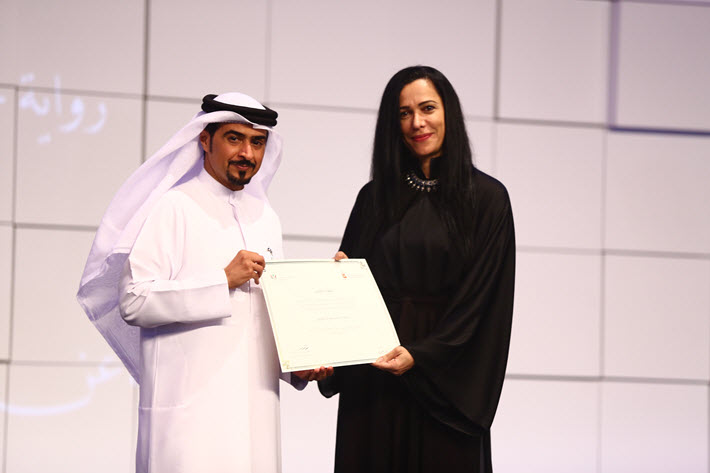 Awards recognizing UAE-specific work and international Arabic literature are announced as the International Publishers Association names its next president to a two-year term. Author Basima Younis’ novel Until the End of the Month (Emirati Writers Union) has won the Best Emirati Book by an Emirati Creative Writer in the Sharjah International Book Fair (SIBF) Awards.

The prize for Best Emirati Academic Book honor has gone to Historical Depth of Federal Intellect in the UAE (Al Mezmaah Studies and Research Center) by Salem Humaid.

In the category of Best Emirati Book About the UAE, Faleh Handel’s A Glossary of the Colloquial Emirati Dialect: A Study of Folk Culture and Intellectual Values (National Library, Abu Dhabi Tourism and Culture Authority).

Winning in the classification of Best Arabic Novel is Egyptian author Ahmed Khalid Tawfiq for Like Icarus (Dar El Shorouk).

Three publishers have been named, as well:

These awards have the patronage of Sharjah’s Sheikh Sultan Bin Muhammad Al Qasimi, himself an author, and are geared to highlighting culturally relevant work.

The book fair itself continues to November 12 at Expo Center Sharjah. More from Sharjah International Book Fair is here and here. The Geneva-based International Publishers Association (IPA) announced during Frankfurt Book Fair that Elsevier’s Michiel Kolman of Amsterdam is to succeed the Bloomsbury UK’s Richard Charkin as president of the organization.

Kolman is senior vice president for Global Academic Relations with Elsevier and has 25 years in publishing. He has worked for Elsevier in Tokyo and Frankfurt, as well as in Amsterdam, and was with Wolters Kluwer in a division that’s now part of Springer Nature.

His PhD from Columbia University in New York is in astrophysics, and that doctorate was taken on a Fulbright scholarship.

In a prepared statement on his acceptance of the post, Kolman is quoted saying, “These are challenging and rapidly changing times in the world of publishing, but publishers have consistently shown themselves to be highly adaptable.

“We will need to build on that further to continue to achieve the IPA’s objectives, most notably the protection of copyright and freedom to publish.”

For his part, Charkin is quoted saying, “I know that Michiel will make an excellent president of the IPA with his global and hands-on experience of international publishing. It has been a great honour for me to be president and I’m sure Michiel will feel the same way.

“The role of the IPA and its president is becoming ever more important as our industry navigates the threats and opportunities of a continually changing political, technological, legal and creative landscape.”

Mexican publisher Hugo Setzer of Manual Moderno has been named vice-president for 2017-2018 and is president-designate for 2019-2020.