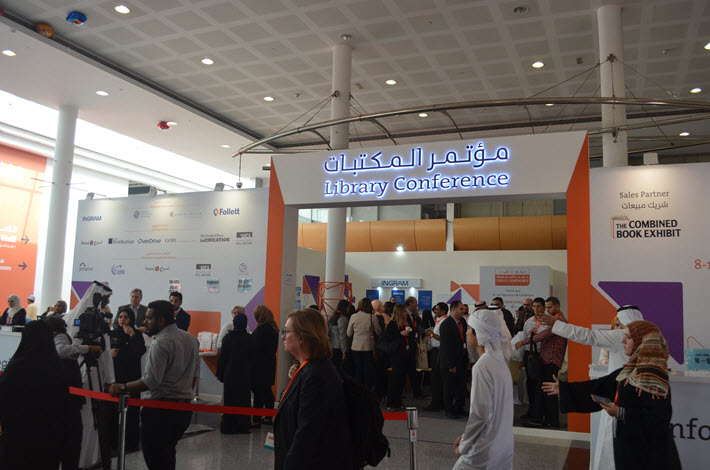 The American Library Association holds its third Sharjah conference for Gulf region colleagues in the Arab world, cautiously worried by the US election news while busy transforming libraries’ purpose. Within days of the American Library Association (ALA) opening address that Roger Tagholm covers here, we find a US government transition team and Republican party at pains to reassure concerned citizens—of the world—that the Trump presidency can be a positive force. And the ALA for more than a year has been pressing its ‘Libraries Transform’ agenda. Only time can tell how well both will fare in a world of wrenching change.—Porter Anderson

Todaro was interrupted with the news by Tony Mulliken, chairman of Midas Public Relation. Todaro responded, “Now is one of the most important times to talk about our expertise in libraries and about what libraries can offer, because we now know that Donald Trump is the new president, and we face challenging times ahead.”

Todaro would later stress that the ALA “is a bipartisan organization representing some 60,000 people from across the political spectrum. Five months ago we reached out to both the candidates, and just last week with what has turned out to be fortunate timing–we met with the Trump transition team and spoke to them about the role of libraries.

“Members of the House [of Representatives] and the Senate will receive a letter from the ALA welcoming them—or welcoming them back—and outlining what libraries do in their states. We’re very committed to working with the new administration and the ALA is ready for a new future.”

The mood was somber among US librarians who work in the Arab world’s Gulf region and who were discussing the election results with a mixture of disbelief and grim resignation.

Christopher Alario, originally from New York and now information services librarian, in historical maps for Qatar National Library in Doha, told Publishing Perspectives, “It wouldn’t surprise me if there’s a recession now, and libraries are always the first service to get cut.

“Libraries are important in a recession. They’re where people go to find out about jobs, to educate themselves, to pick themselves up. They’re key infrastructure.”

Hunt Luker, originally from Arizona and now a librarian at Higher Colleges of Technology in the emirate of Fujairah, said: “The result doesn’t bode well for libraries in the US. If Republicans hold both houses, then federal and state budgets are in big trouble.” Adapting to the Times

But the core of Todaro’s address was positive the keyword being “transform.” She spoke with conviction about the ALA’s “Libraries Transform” campaign, which began last year under Todaro’s predecessor, Sari Feldman. The program is a series of initiatives “for libraries everywhere to…show their communities that libraries ‘transform'” from older models of physical book repositories to community hubs of digital services and local creativity.

The campaign’s primary message, Todaro said, is that “libraries today are less about what they have for people and more about what they do for and with people.  The campaign is designed to increase public awareness of the value, impact and services provided by libraries and library professionals.”

The campaign’s website has content freely available to all libraries to encourage and enable them to shout about what they offer in their particular communities. This is one of the “Because” promotional pieces of the ALA’s ‘Libraries Transform’ program. You can see them all here; just scroll down on the page.

Todaro is particularly keen on the “because” statements, a series of key promotional messages that libraries can use on posters, bookmarks, social media, websites, wherever they wish.

Examples, the first one adapted for her audience, included:

Todaro stressed simple but effective initiatives like the ALA’s “expert” campaign, which has librarians wear badges saying “I’m an expert in” whatever service might be of use, such as “Finding the information you need” or “Helping you design your Web site.”

She also highlighted the ALA’s Center for the Future of Libraries, a resource with ideas and advice for libraries.

“I go to this website, myself, before I do anything,” she said. “It has so much material.

“For example, it talks about how libraries can aggregate resources within their communities. Students are under incredible pressure these days and the site tells the story of how one library is helping with healthcare with a nurse who regularly comes in to give advice.”

The ALA Event at Sharjah

The SIBF/ALA Library conference continues to grow, with around 400 attendees from the UAE and region this year.

When Janet Fritsch, president of US exhibition company Combined Book Exhibit (CBE), found herself in the adjacent booth to the ALA at the California Library Association show in 2012, she says, she spoke with Michael Dowling, the association’s director of international relations. The ALA, he told her, was interested in links with the Middle East.

Fritsch contacted her business partner and fellow CBE president, Jon Malinowski, who was in Sharjah and he spoke with Ahmed Al Ameri, now chairman of Sharjah Book Authority. A contract was made in 2013.

Todaro says she wants librarians to become advocates for the services they provide, to be champions for institutions that, in some parts of the world—notably the UK at the moment—are under threat.

She says she believes that libraries have a vital role to play in communities and is keen to see the ALA provides them with the tools they need to fulfill that role.

Here’s a video from the “Libraries Transform” program about the key tenets of the campaign: