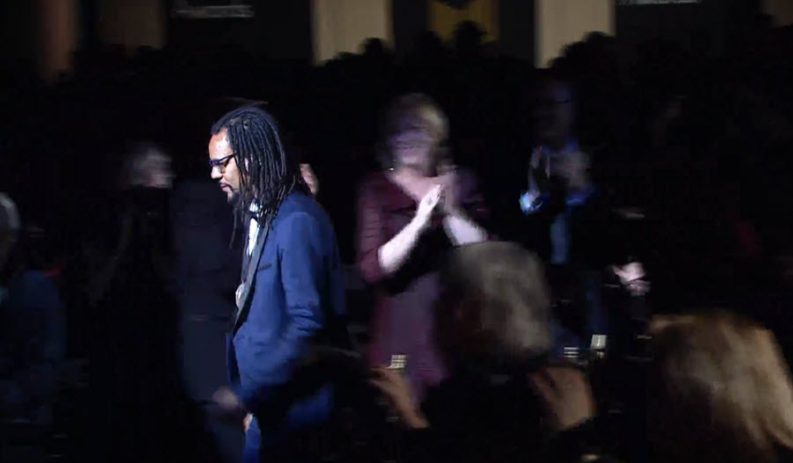 In an evening filled with references to the US general election, the National Book Award ceremony brought to the fore writers of color, the Civil Rights movement, and joy as ‘an act of resistance.’ Author Colson Whitehead walks to the podium to accept the National Book Award for his novel, ‘The Underground Railroad’

‘We Get To Write Our Story’ The National Book Awards program on Wednesday night (November 16) reflected at many points the current—and understandable—American fixation on the results of the November 8 general election.

Host Larry Wilmore opened with a set of strained Trump jokes that seemed funny only in one instance, when he asked whether the United States is ready for a white president.

By evening’s end, Wilmore had redeemed some of his political bent, wise-cracking that the evening—which included a rich array of writers of color—had been “a BET presents” evening, referring good-naturedly to the Black Entertainment Network. While well-received, his quip didn’t point up another interesting outcome of the awards juries’ deliberations: the only woman among the winners was Toi Derricotte, co-founder of Cave Canem.

Indeed, perhaps the most moving handling of the political elephant in the room came from Notre Dame’s Cornelius Eady who, in 1996, was Derricote’s co-founder of Brooklyn’s Cave Canem foundation and center for African-American poetry. Cave Canem received the Literarian Award for Outstanding Service to the American Literary Community, the first time in the 12-year-old award that it has gone to an organization.

After listening to Derricotte, who told the audience at Cipriani’s Wall Street, “Joy is an act of resistance,” Eady made a gentle, steely reference to Trump Tower:

“Right now as we speak, uptown, there are people in a building who are trying to write a narrative about who we are and who we’re supposed to be and what to do about us. And when you lose that story, when you allow that narrative to be taken from you, bad things happen.

“One of the great things about Cave Canem is being able to see each other in the room. And I have that feeling right now, that we’re seeing each other.”

Eady’s eloquence was followed by a heartfelt acceptance speech from the biographer Robert Caro, who was given the National Book Foundation’s Medal for Distinguished Contribution to American Letters.

Caro talked of the great comfort he feels with his editorial team of a remarkable 44 years—agent Lynn Nesbit (Janklow & Nesbit) and Knopf editors Robert Gottlieb and Katherine Hourigan. He also mentioned Knopf’s Paul Bogaards among many important, longtime companions in his success. An emotional Rep. John Lewis, Democrat of Georgia, led his team’s acceptance of the award for Young People’s Literature, with his co-author Andrew Aydin and illustrator Nate Powell, for their book March: Book Three (Top Shelf Productions / IDW Publishing), the third in the trilogy on the Civil Rights movement.

The third volume in the graphic novel treats the 1963 era of the Freedom Vote and Mississippi Freedom Summer.

Aydin took the chance to say, with perhaps some wry pleasure, “Let the prejudice be buried once and for all—against comic books.”

, who won for The Performance of Becoming Human (Brooklyn Arts Press), asked the audience to help be sure “this country remains safe for undocumented people and speakers of many languages,” another reference, of course, to the US election outcome of just over a week prior.

Borzutzky has told the National Book Foundation that he was “thinking about my hometown of Chicago” when he wrote the book, “and how it destroys itself, abolishes public services, closes psychiatric hospitals, privatizes or shutters its public schools, and militarizes its police that have murdered and tortured with degrees of impunity since the 1970s.”

Clearly the work has come from a place of tremendous emotional complexity for Borzutzky. “I was thinking about bureaucracies and the abuse of data and fake mathematical measures to justify the destruction of real people’s lives. I was thinking those who cannot survive the brutalities of our rotten economies.” In introducing the nonfiction award, judge Masha Gessen—herself the author of The Man Without a Face: The Unlikely Rise of Vladimir Putin—spoke of urgency as a criterion that emerged in her jury’s deliberations.

In accepting his award for Stamped from the Beginning: The Definitive History of Racist Ideas in America
(Nation Books), author Dr. Ibram X. Kendi echoed that sense of urgency in his study American racism.

“I spent absolute years looking at the worst of America” in studying “the terror of racism,” Kendi told the audience.

“In the midst of the human ugliness of racism, there’s the human beauty in the resistance to racism. That’s why I have faith…that you and I can create an American where black lives matter.” As was widely expected, Colson Whitehead won the National Book Award for fiction, for his Oprah-anointed The Underground Railroad (Doubleday/Penguin Random House).

In a generous bit of humor at his own expense, Whitehead told the audience, “I’ve been at Doubleday for 18 years and was going to say, ‘Who gets to be at one publishing house for 18  years?’—and then Robert Caro pulls his whole thing” of being with his Knopf team since 1972.

Referring to “Oprah Winfrey of Oprah Winfrey fame,” Whitehead said, “This time last year, I was like, ‘Don’t mess it up, Colson'”

At evening’s end, his advice to publishers in politically painful times was this:

“BMF: Be kind to everybody, make art, and fight the power.”