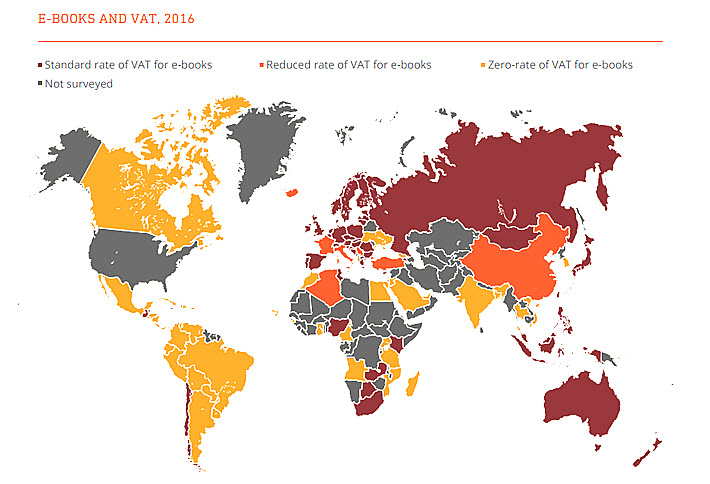 In a new report, the International Publishers Association finds that higher VAT rates on books can have a negative impact on book sales, education and copyright. In one chart of its VAT report produced with the FEP, IPA indicates where standard, reduced, and zero rates of VAT are in place for ebooks. Image: IPA & FEP Annual Global Report

The report’s purview does not include the United States because each of the 50 states there manages its own tax protocol.

The position of the IPA, according to the organization’s summary of the VAT report, is that “Books, as a strategic commodity that activates the knowledge economy, should be exempted from VAT or subject to a zero-rate regime.

“There is strong evidence,” the statement reads, “that exempting books from tax brings widespread medium- and long-term social, cultural and economic benefits.

“A zero-rate of VAT on books is a fast and equitable way to boost consumption of literature in the classroom, at home and on the go. Books hold and deliver knowledge, and digital-based knowledge economies depend on the dynamic, unobstructed circulation of books.”

The IPA’s introductory text also warns that book markets are highly vulnerable to even small increases in taxation. “In Kenya, a 16-percent VAT (value added tax) rate imposed in 2013 has caused nationwide book sales to fall 35 percent, driven down public school performances, and ushered in an era in which pirated textbooks now outsell their legitimate counterparts.”

As an example, the IPA writes, “In Kenya, a 16-percent VAT (value added tax) rate imposed in 2013 has caused nationwide book sales to fall 35 percent, driven down public school performances, and ushered in an era in which pirated textbooks now outsell their legitimate counterparts.” This is a situation reported on by Publishing Perspectives in August, as Kenya’s publishers spoke out about the situation there.

The precede also flags the “ebook-as-digital-service” problem in which some places tax ebooks at a higher rate than print books as software-like services, “thus stunting the growth of the ebook market,” IPA writes, “especially in smaller language markets.

“Moreover, this discrimination penalizes people with print disabilities, many of whom rely on e-books, which are more accessible to them yet more costly due to this price differential.”

The upshot of comparative VAT rates in the IPA-FEP report sees an average print book VAT of 4.8 percent.

The average ebook VAT is 9.5 percent.

And standard VAT rates in Asia, averaging 8.5 percent, are substantially lower than in Europe, where the average is 20.7 percent. In this chart of its VAT report produced with the FEP, IPA indicates where standard, reduced, and zero rates of VAT are in place for print books. Image: IPA & FEP Annual Global Report

Key Points From the 2016 Report

The report includes country-by-country listings of responses and some discussion from the IPA and FEP leaderships. The FEP’s commentary focuses on a “view from Brussels” and various “very positive developments” in the last year “with regard to the possible application of reduced rates of VAT to ebooks, largely involving the European Commission’s VAT Action Plan.