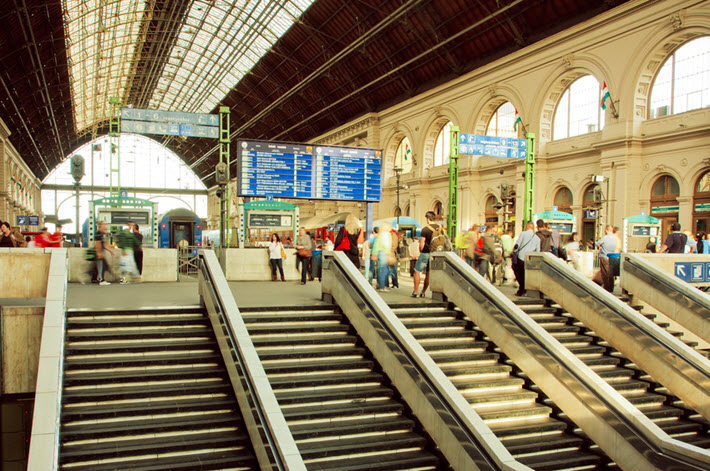 ‘A significant book fair doesn’t seem to have been able to come into being in Central and Eastern Europe” says Hungary’s Zsuzsanna Szabó. The head of the Balassi Institute’s publishing program, Zsuzsanna Szabó, talks with Hungarian Literature Online (HLO) about the recent Frankfurt Book Fair, the Krakow Book Fair, and the Conrad Festival. The article is not bylined but it’s translated by Mark Baczoni.

Hungarian Literature Online: Frankfurt Book Fair, considered the most important showcase for Hungarian literature in translation–especially in German–began on October 19 and ended on the 23rd. What conclusions did you come away with? How did the Hungarian stand do–are there lessons to learn? Are you satisfied?

Zsuzsanna Szabó: The most important thing we learned is that we have to rethink the design of the stand completely for next year, and we also have to redefine the functional workings of the Hungarian stand.

It would be nice if we could have a part of the stand that would afford the authors a place both to present themselves and sign books. The MKKE will clearly consult with the publishers as well on this issue.

HLO: Frankfurt Book Fair only just ended and you’re already in Krakow, at the Book Fair there and at the Conrad Festival. Which writers are representing Hungary and what were your expectations going into it?

ZS: The Conrad Festival is the most important literary festival in Central and Eastern Europe. The guest of honor in 2016 was the Hungarian Géza Röhrig, alongside such internationally well-known authors as Richard Flanagen, Michael Cunningham, and Eleanor Catton, a young author from New-Zealand.

Almost 200 people turned out for the conversation between Géza Röhrig and the Festival’s program director. Anna Butrym, who was interpreting, received the prize for the best interpreter at the festival for her efforts. There were also nearly a hundred people for the conversation between Krisztina Tóth and the Polish author Joanna Bator in the National Museum in Krakow (where an exhibition on the golden age of Hungarian painting–1896-1936–has just opened) about her work, Vonalkód és Pixel.

HLO: You spend the entire year going from one literary event to another, so you have quite a broad frame of reference. What do you think are the fundamental differences between Frankfurt and Krakow, and how do we compare in this sense with the Budapest International Book Fair?

ZS: Frankfurt is…the most important book fair with an excellent program and authors. We’re also planning to be the guests of honor at Leipzig soon. The Krakow and Budapest Fairs are primarily for the local publishers, though both bill themselves as international and both have more than 20 years of pedigree. In my experience, a significant fair doesn’t seem to have been able to come into being in Central and Eastern Europe, neither in Prague or Warsaw or Krakow, or even Bratislava.

The interview was originally published at Litera.