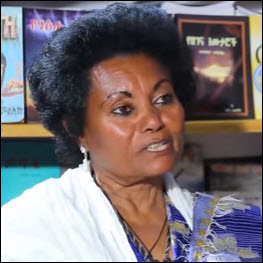 A political novelist looks back on how issues explicated by her fiction ended up hampering book sales in her home country of Ethiopia. ‘To Test the Potential I Had in Writing’

Melaku, born and raised in Addis Ababa, is the widow of Brig. Gen. Tariku Ayne. A well-known novelist in her home country, Melaku has written nine novels that touch on some of Ethiopia’s social, economic and social issues.

A former teacher and avid supporter of Legadadi Radio Station’s art radio program dedicated to female empowerment, she was fully retired before launching her career as a writer. She now is an active participant in the Gondar Development Association and the Ethiopian Writers Association.

Here are a few highlights from Mulat’s interview with Melaku.

Addisalem Mulat: When did you start working for Legadadi Radio Station? Tsehay Melaku: When they discovered my continuous involvement, [the station] came straight to the school where I was working. I was given a two-week program. I was happily and actively taking part Everybody was enthusiastically attending the program from time to time.

I worked for Legdadi Radio Station for 10 years free. In fact, my target was to test the potential I had in writing and to what extent my issues would win the hearts and minds of the general public. My dream was to be an author. In the early days, I didn’t know whether my dream would turn out to be a reality except keeping on working hard.

AM: Did your dream become a reality?

My first novel entitled Qusa was written in 1989. One thousand copies were printed. …My fame soon spread across the country following my successful work. I turned out to be infinitely happy. Anguz was not a lucky book. Sadly, the books left unsold.

AM: What was the problem?

TM: My books weren’t sold at all for the reason that it was the time that the Derg regime was removed from power. Most people were worrying about scores of things. Everybody’s attention was on magazines and newspapers following the situation of the country. My books were left unsold. The printing cost was 48,000 birr (US$2,156). I borrowed 24,000 Birr (US$1,078) and paid the first down payment.

My books were published on credit. I wasn’t able to pay the credit as quickly as possible. When I was at a loss what to do, I requested the school to cooperate. In the end, they understood my problem and began deducting some amount of money from my salary every month. It took three years and a half to clear the debt.

AM: What issues do your novels embrace?

TM: The novel titled Anguz (Unerasable Scar) focuses on the mass killings of youth and the highly educated segment of the society. Moreover, it touches on to what extent a number of people pointlessly lost their lives in the Red Terror and White Terror.

It’s crystal clear that the overriding body of the time was making use of dreadful aggression against anybody that was not a part of its party by illogically arresting, tormenting and slaughtering thousands of people.

At that point in time, the Ethiopian People’s Revolutionary Party (EPRP) confronted the Dreg’s control of the rebellion itself by stirring up for a broad based democratic government run by civilians.

Similarly, the White Terror as well was able to annihilate the lives of a number of Derg members and their supporters within the shortest time possible. At that point in time, security forces were methodically hunting down and killing alleged EPRP members and their followers, in particular students.

At the end of the day, Colonel Mengistu turned out to be successful. The Derg won the struggle for control of the Ethiopian revolution. In a few words, the novel under discussion clearly expresses the nuts and bolts of the Derg regime and its impact on the general public.