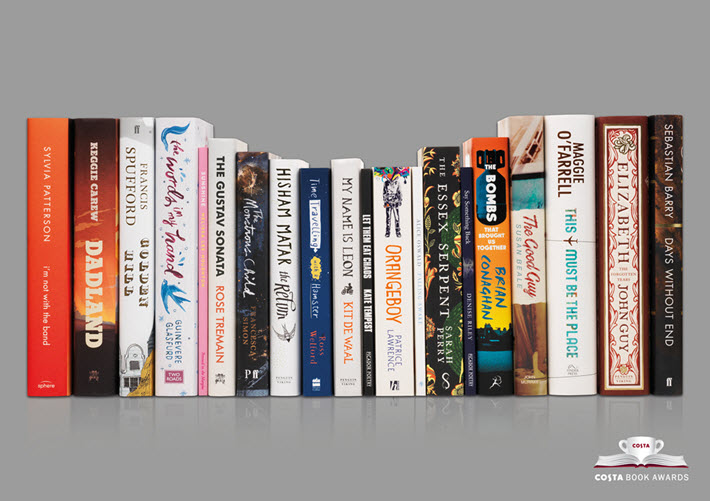 Two-thirds of the shortlisted candidates are women in the UK’s Costa Book Awards are women. And three in one category are former winners. A ‘Changing Landscape of Publishing’

As Sian Cain, books site editor for The Guardian, writes in Costa book award 2016 shortlists dominated by female writers, “Rose Tremain, Sarah Perry, and Kate Tempest [are] among 14 female writers of the 20 nominated across the awards’ five categories.”

While many other outlets’ reports focus on the preponderance of women writers in this year’s shortlists, the BBC’s coverage leads with another interesting factor, in Costa Book Awards: Three Previous Winners Nominated for Best Novel.

The newcomer to the Costas on that Novel Award list is Sarah Perry, for The Essex Serpent, a book that some had expected would draw a spot on the Man Booker longlist. Cain at The Guardian quotes Perry, saying:

“To have a panel of judges consider it one of the four best novels of the year is so extraordinary. I think it will give me greater courage and confidence to carry on writing. I wish I had rigid self-belief regardless of outside influence, but when someone enjoys my book, I go: ‘Oh, I’ll do another one then!'”

Cain points out that the poetry shortlist’s authors are all female. The women on that list include spoken-word artist and playwright Kate Tempest for her collection, Let Them Eat Chaos.

At The Telegraph, in Costa Book Award 2016 Shortlist Stars 14 Women and Just Six Men, Hannah Furness writes that the shortlists this year comprise “the most female authors in [the award program’s] history, as the changing landscape of publishing overturns decades of dominance by men.” She writes of “a trend which has seen the proportion of female writers gradually creep up over its 45-year history,” and of “the rise of the Internet” being a factor that “allows new voices to be heard.”

The winners of each of the five categories are to be awarded £5,000 (US$6,260) when final decisions are announced on January 3.

The Costa Book Awards were established in 1971 and are limited to writers living in the UK and Ireland. This year, there were a reported 596 entries overall, now reduced to 20 titles in the five categories. Book entries are made by their publishers each year, by the end of June.