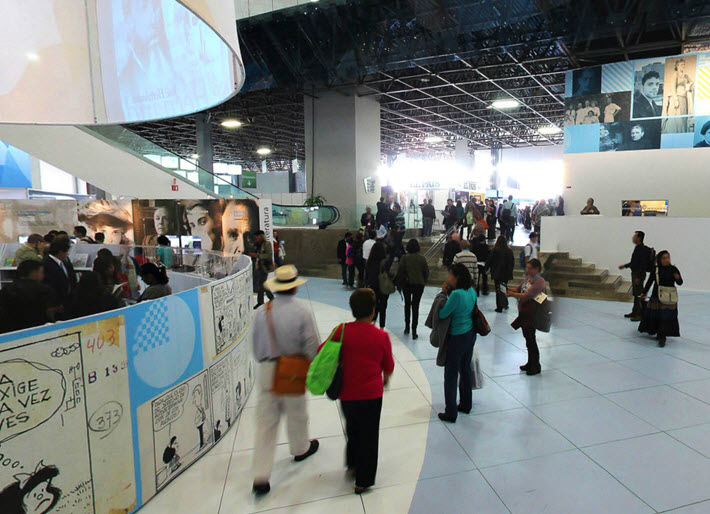 Closing the Gap Between Brazilian Literature and the World

Thirty Brazilian publishers will attend the Guadalajara Book Fair in Mexico. The fair opens on Saturday (November 26) and runs to December 4.

Brazil’s 540-square-foot stand will showcase some 600 books, according to Luiz Alvaro Salles Aguiar de Menezes, who manages international relations for the Brazilian Book Chamber and heads up Brazilian Publishers, an initiative of the Brazilian Trade and Investment Promotion Agency which aims to promote Brazilian content globally.

The strong Brazilian presence in Guadalajara, however, isn’t new. For the last five years, Brazil has had a special focus at the fair, thanks to the Destinação Brasil, a literary festival inside the Guadalajara Book Fair that is focused on Brazilian writers. The festival is sponsored by Brazil’s Ministry of Culture and the Brazilian Book Chamber. This year’s event will be the largest yet, with 16 participating writers. Among the Brazilian authors appearing at this year’s fair are Adriana Lunardi, Afonso Borges, Ana Paula Maia, Antônio Xerxenesky, Beatriz Bracher, Carol Bensimon, Carol Rodrigues, Lucrecia Zappi, and Stella Florence.

Destinação Brasil “is the only literary festival outside Brazil that consistently aims to close the gap between Brazilian literature and the world,” says the Guadalajara Book Fair content director Laura Niembro.

Brazil’s presence will be enhanced this year by the fair’s Guest of Honor, Latin America.

“We don’t have as many bookstores or libraries as we should, so books don’t reach people, which is our main obstacle.”Luiz Alvaro Aguilar Salles de Menezes

“Guadalajara is very important to us,” Menezes tells Publishing Perspectives, “because we’re surrounded by Spanish-language countries and it’s vital that we have a presence there. We’re the largest Portuguese-speaking country, so whenever we make a move, people notice. We’ve had the privilege of being the guest nation at book fairs such as Frankfurt, Bogotá, and Bologna, and we were one of the seven markets in at Frankfurt this year” at the Business Club’s The Markets: Global Publishing Summit.

“Our culture is made up of many others from across the world,” he says, “so now we’re giving something back to the world through our writers and publishers. But we still have a lot of room to grow, our publishing houses are getting more professional, are beginning to look outside of Brazil, and are getting better at selling rights.

“But the problem is getting people to read in Brazil,” Menezes says. “We don’t have as many bookstores or libraries as we should, so books don’t reach people, which is our main obstacle. We need to get people reading from an early age and to make it a habit, and it’s teachers and mothers who are the best people to influence children’s reading.

“And that’s why book fairs are so important: because schoolchildren attend and they encourage people to read,” he says, adding that the largest genres of Brazilian books showcased at fairs abroad are children’s and YA.

“We try to find new ways to sell our books in Brazil, such as in conjunction with Avon, and selling door-to-door.”Breno Lerner

And Breno Lerner, director of the publishing house Melhoramentos, agrees.

“Children’s and YA books are important in Brazil because we have a young population,” Lerner says, “so it’s a very important segment of the market and probably the fastest growing. But it’s been affected by the crisis because books are a luxury. You stop buying books before you stop paying your cellphone installments.”

Melhoramentos specializes in publishing children’s and YA titles and was the first company in Brazil to publish an e-dictionary to be read on multiple devices, in 2009. The company publishes around 120 new titles a year. But that’s half its output of five years ago, Lerner says.

Despite 700,000 visitors, Lerner says this year’s São Paulo Book Biennial was less successful than two years ago, with 20 to 30 percent fewer sales, although the contraction was not as sharp as he had anticipated.

“Dictionaries are the only growth market in ebooks in Brazil, representing 9 percent of dictionary sales, and set to rise to around 12 percent this year.” Lerner also highlights the importance of attending book fairs as a way of getting titles known outside Brazil. “We’re still more buyers than sellers,” he says, “and we’ve seen a growing interest in Brazilian books, above all in Spanish-language countries, and in Europe and Asia. South American countries have young populations, and we all have the same education problem, which cannot be solved without books.”

Brazil has been among the largest book markets in the world, but a substantial part of that had to do with government purchases. As Publishing Perspectives’ Hannah Johnson write in our The Markets white paper, “Unfortunately, the momentum from [2013’s] heavy investment in Brazil’s book industry by the government came to a sudden stop in 2014 as the country’s economic growth slowed. Government book purchases dropped by 16 percent in 2014 (according to CBL), along with other publishing investments, as Brazil’s previously skyrocketing economy fell and inflation increased. The Brazilian publishing industry subsequently shrank by more than 5 percent in 2014, according to the Institute of Economic Research Foundation (FIPE).”

“The government,” Lerner says, “used to account for 30 to 40 percent of our sales, and in the last two years we’ve lost that portion, and so we have to compensate in other areas. The whole market is in crisis.” He says that selling children’s books in Portugal requires books to be translated. “It’s a myth that we speak the same language as in Portugal,” he says. “So we try to find new ways to sell our books in Brazil, such as in conjunction with [cosmetics company] Avon, and selling door-to-door. We sell where there are no bookstores, such as in the Amazon villages, where we sell very simple children’s books and very cheap cookbooks.

“We have a cookbook collection that has sold 37 million copies through the Avon catalogue.”

Melhoramentos has had an alliance with Avon for 12 years and has similar arrangements with other cosmetic firms and with Tupperware.

“Brazil has a huge bookstore problem; official figures put the total at about 3,000 in the whole country. For a population of 200 million people. So we have to find new ways to distribute.”

The problem isn’t illiteracy but distribution, Lerner stresses. Sending a book from São Paulo to Manaus, capital of the Amazonas state, he says, takes 20 days.

But even the door-to-door approach is being killed off, he says—by security concerns. “Every building in São Paulo has a security guard and electronic doors…There’s no more ringing the doorbell. In fact, there are no more doorbells.”

Door-to-door distributors, Lerner says, are thus relocating to smaller cities or selling directly in schools, a business model that is proving successful, targeting 5- to 10-year-olds, he says.

Among the company’s success stories are the children’s books Meu Pé de Laranja Lima (My Sweet Orange Tree), by José Mauro de Vasconcelos, which sold to 27 countries, and O Menino Maluquinho (The Nutty Boy), by Ziraldo Alves Pinto, which has sold four million copies in Brazil and in more than 10 countries. He says he saw this reflected in poorer sales for the company at this year’s Bienal do Livro in São Paulo.

Gomes says the children’s segment is a mainstay of sales, and makes up between 20 and 25 percent of the publisher’s catalogue of around 1,300 titles. Its main markets for rights sales are South Korea, Taiwan, China, and Malaysia.

“It’s an important year for us in Guadalajara,” Gomes says, “because of the Latin American focus. We’re part of the same region but we feel very far from other Latin American countries, and we need to work toward greater cooperation.”

As we covered earlier, one event on Saturday, the Guadalajara fair’s opening day, is the awarding to Norman Manea the $150,000 Literature in Romance Languages Award.