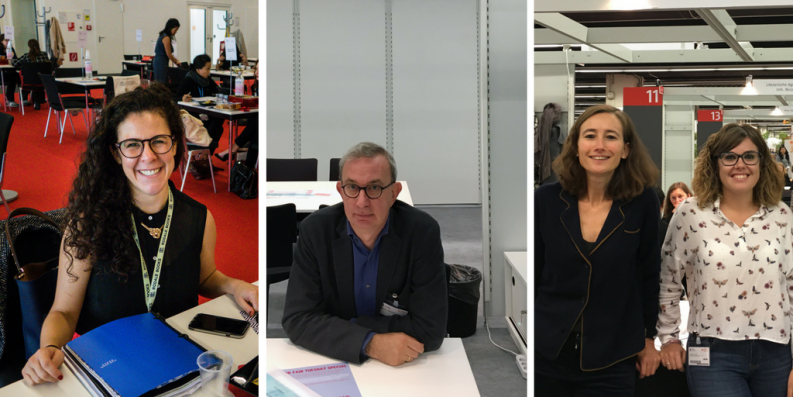 Last year literary agents started a movement to hold their rights meetings on Tuesday in the Literary Agents & Scouts Centre (LitAg, Hall 6.3) rather than in the traditional Frankfurter Hof or the Hessischer Hof. This year the momentum grew with the addition of the Publishers Rights Corner (PRC), where publishers could rent tables for the day.

Former scout and now Rodale (Hall 6.2 A 62) rights director Rhea Lyons said she was pleased to be in the Rights Corner. “At the Frankfurter Hof, it’s really hard to meet people. I still remember a very stressed client pulling me out of a meeting and hissing, ‘what does the rights director look like?’ I didn’t want to have that experience. I love the vibe of the Frankfurter Hof, but as far as having a productive meeting I thought this would be a good move.”

Lyons added that the staff were “super helpful, gave us cookies, wi-fi and extra chairs.”

Among other titles, this Fair Lyons is selling Melissa G. Moore’s Whole, a self-help book about overcoming trauma. Moore’s father was serial killer Keith Hunter Jesperson. Lyons also has high hopes for a title she acquired 24 hours before coming to Frankfurt, which is “all about dicks”. The Penis Book, by Dr. Aaron Spitz, is, as the title suggests, an authoritative (and funny) book on health care for the penis.

Inside the LitAg, Marco Vigevani–whose agency merged last September with the International Literary Agency and Luigi Bernabo & Associates to become The Italian Literary Agency–said having meetings in the LitAg as well as with publishers at the PRC means “less stress, and it’s less expensive. In the Frankurter or Hessischer Hof, you’d miss appointments, rushing from the lobby to the terrace, catching cold in between. It was messy and inefficient. I also enjoy seeing the Fair en deshabillé, with people setting up.”

Vigevani is selling rights to Oxford criminology professor Federico Varese’s nonfiction book Mafia Life, an anthropological take on mafia organizations around the world. So far, Vigevani has sold rights to Einaudi in Italy, Beck in Germany, Profile Books in the UK, and Companhia das Letras in Brazil. Another big book is award-winning novelist Francesca Melandri’s Sangue Giusto (Blood Right), published by Rizzoli, a “European saga about Italy’s colonial past and present.”

Pontas Agency’s Anna Soler-Pont, fresh from last weekend’s 2016 Planeta prize (€600,000) win by her author Dolores Redondo for her new novel, said she had been at the Frankfurter Hof on Monday for appointments, but that Tuesday the Pontas team had decided to support the group of agencies spearheading the Tuesday rights sessions in the LitAg.

“We were paying for the LitAg on Tuesdays anyway, but had never used it. Publishers prefer the Frankfurter Hof, but I told them that here, at least, we can talk and we’re here to talk. We don’t have to sit on the floor! The Hofs had glamor but you were missing appointments all the time.”

Soler-Pont’s hot titles are, of course Redondo’s Baztan Trilogy and Todo esto te daré (All This I Will Give You), a crime thriller about male friendship which has already sold to Planeta imprints in France, Italy and Spain.

She’s also selling rights to a first novel by Clarissa N. Goenawan. Goenawan, who writes in English, was born in Indonesia and grew up in Singapore. Her novel, a cross between literary fiction and magic realism has been described as Murakami meets Elena Ferrante. Rights have been sold to Bronwen Hruska’s Soho Press in the US, to Tamir Sendik Books in Israel, and Gramedia in Indonesia.