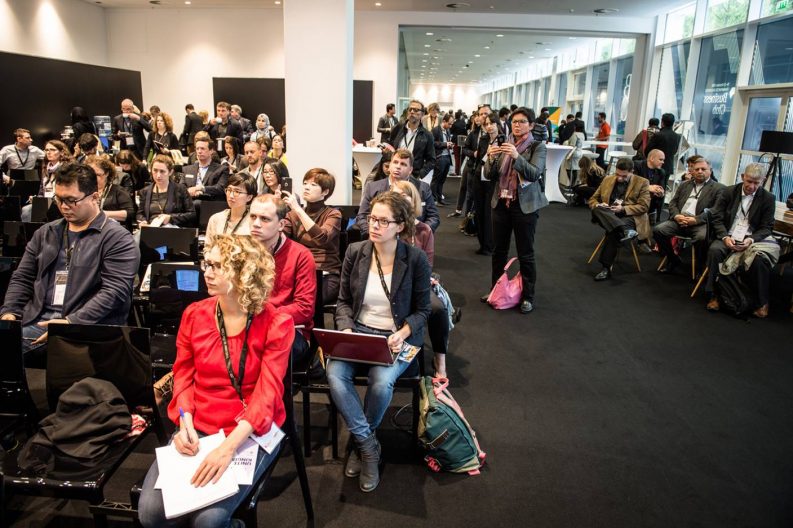 From education to the trade, Frankfurt Book Fair’s opening is stressing freedom of expression and the responsibilities that go along with it. At the 2016 The Markets: Global Publishing Summit ahead of the official opening of the Frankfurt Book Fair (Photo: Frankfurter Buchmesse / Bernd Hartung)

Mark Allin struck precisely the tone of reach and responsibility that many of us were looking for.

“I think it’s important to think about what problems we can explore as an industry.”

Allin, who last June became the 12th president and CEO of John Wiley & Sons, came to Frankfurt Book Fair’s Business Club to give the keynote address on Tuesday (October 18) to the second annual staging of The Markets: Global Publishing.

Allin’s insights are based on Wiley’s scale: as many as half-a-million students are using its courses.

“I think it’s important for us at something like Frankfurt Book Fair to think not only our day to day responsibilities” in publishing, he said, “but also about our role in this very fragmented world we live in.”

The Markets is a kind of three-ring-circus of a conference. The well-attended event follows its keynote by breaking into three key sections: commentary from industry “visionaries,” from analysts, and from industry business people, the “players” of the program. It’s all brought to bear on the seven pivotal industry regions: Brazil; this year’s Guest of Honor Flanders and The Netherlands; The Philippines; Poland; Spain; the United Kingdom; and the United Arab Emirates.

And with the resonance of Allin’s pressing questions–“How many people are getting access to high-quality education? What is the cost of education?”–answers, proposals, quandaries, and challenges were placed before the audiences on the visionary and analyst stages.

Rebecca Smart, managing director of the UK’s Ebury Publishing, said that publishing was “too staunchly white and middle class, and its leadership is too male.”  She added that this would not change overnight–“it needs generational change”–but she said it would happen and much was already being done by Penguin Random House and others to change the mix of the workforce.

Holger Volland, vice president of Frankfurt Book Fair, had a neat summary of the contrasting approaches to research and development between the US and Europe.  “In silicon valley it’s brain meets money meets tech.  In Europe, there’s lots of brain, no money, and hardly any tech.” Volland’s’ point was that publishing companies were not putting enough money into R&D, and certainly not in the same percentage as the big tech companies.

The Sheikha Bodour Al Qasimi, founder of Kalimat publishers in Sharjah in the United Arab Emirates, reminded delegates that the emirate’s free zone Sharjah Publishing City will be open for business at the end of this year or early 2017, aided, she noted, “by a stable political climate.”  She spoke of the emirate’s desire “to build a reading culture and to make publishing a source of national pride,” and said she hopes the sector will employ 6,000 people by 2020.

Javier Celaya of Spain’s Dosdoce consultancy talked about smart bookstores of the future which will use “beacons” that send messages and book suggestions to your mobile, depending on your location in a store.

Peter Paul van Bekkum of The Netherlands’ Mybestseller and Sweek platforms flagged up a new idea.  “Publishers should publish their rejected manuscripts on a different branded platform,” meaning new life for the slush pile.

On the analysts’ stage, the UAE’s Walid Aradi, CEO of Tahseen Consulting, included quick checks on the status of bookstores in the region. The UAE has 373 retail outlets, he said, and the largest retailer has only 12 stores. The largest bookstore in the Middle East, he saiod, carries 38,000 titles in Arabic.

By contrast, Spain’s Daniel Fernández spoke of bookstores closing at a rate of one per day during the height of the economic crisis in his country, and said that some 30 percent of the value of the domestic books market was lost in the economic doldrums only very recently starting to ease.

And the United Kingdom’s Stephen Lotinga, chief of the Publishers Association, touched on how subscription and online access “seems to have slowed last year,” but audiobooks, he said, have continued to grow in the UK–which is Europe’s second largest books market and fifth largest in the world. In the Brexitian future, he said, one role for the Publishers Association will entail prioritizing free trade agreements as a key objective, naturally.

As Mark Allin had said, “Our communities are learners, instructors, professionals, researchers, and the institutions in which they work: universities, corporations, and governments.”

And each sector and subdivision of the industry, from education to trade, is working on that need to engage as directly as possible with the the customer, the end use: a big player in every one of The Markets.