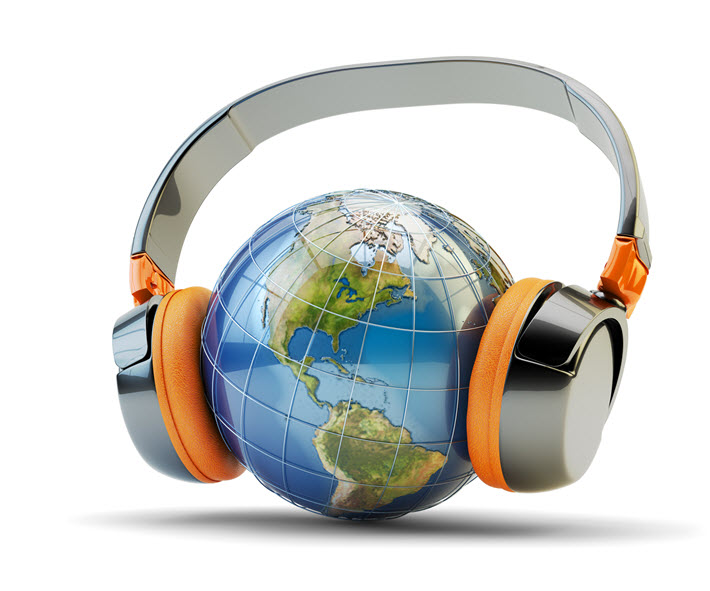 Whether you’re joining us at Frankfurt Book Fair or following along from afar, there’s good listening for publising people just about everywhere these days on the international podcast scene. Ssome media specialists say the popularity of podcasts probably has been exaggerated. As reported last month by The Hot Sheet, while the top 10 percent of podcasts are estimated by Libsyn’s Rob Walch to average some 3,900 downloads each. The top 20 percent might get 1,400 downloads for an episode. The median number of downloads for an episode of a standard podcast is only 173, and that, of course, likely has a lot to do with how ubiquitous these recorded Internet audio pieces have become.

Nevertheless, many enjoy listening to podcasts and there’s no shortage of them in and around the publishing industry.

At Frankfurt Book Fair next week, in fact, Copyright Clearance Center’s (CCC) Chris Kenneally, host of the company’s Beyond the Book podcast, will be taping events for episodes of that series. “Basically, we record everything” in which CCC participates, Kenneally tells Publishing Perspectives, and you’ll hear it later on various releases from Beyond the Book.

For example, there’s an interview with Carl Robinson of Ixxus at the Publishing Perspectives Stage (Hall 6, E11) at 11:30 a.m. on Wednesday (October 19), and the podcast rendition of it is scheduled for Monday, October 23. And on Thursday, CCC chief Tracey Armstrong speaks at 11 a.m. Thursday (October 20) in the Concorde Room (Hall 4.C) as part of the company’s town hall, and her comments will be heard soon in another edition of Beyond the Book.

“We’ll also do a same-day release,” Kenneally says, “for a one-on-one conversation with London-based entrepreneur Vitek Tracz, from the town hall interview he does on Thursday (October 20), also in the Concorde Room. Another online event that will include audio and/or video from Frankfurt is the Saturday (October 22) Indie Author Fringe event from the Alliance of Independent Authors (ALLi). Dave Penny will be taping material during the week. And Orna Ross, founding director of ALLi, will be on the program of Frankfurt’s International Author and Self-Publishing day of programming, at 10 a.m. on the Publishing Perspectives Stage, (Hall 6, E11), to brief the attending authors on the world state today of the indie movement and trends of key importance for their careers.

Ross tells us that a part of her own Go Creative! podcast series may emanate from Frankfurt, as well.

It may sound like the title of a whodunnit, but this podcast carries author interviews, behind-the-scenes information, and master classes from the literary scene in Hong Kong. For almost 25 years, the Hong Kong Writers Circle (HKWC) has been part of the writing and publishing environment in the territory.

This is a science fiction and fantasy podcast from Pakistan, hosted by critic, editor, and author Mahvesh Murad. It’s broadcast in conjunction with Macmillan division tor.com. Recent episodes have included interviews with fantasy author Marie Brennan and with fiction and comics writer Genevieve Valentine, author of the comics Catwoman and the Xena: Warrior Princess.

This is an interview-based show in which local and international guests talk book publishing, especially in the Indian market. They cover such topics as translations, marketing, and ebooks. Host Amar Vyas keeps listeners up to date with news and trends from India’s publishing scene.

This is a weekly “novel podcast,” hosted by journalist Jonathan Ancer and sound engineer Dan Dewes, about South African books and the authors who write them. Its 30-minute episodes feature extensive interviews with authors, novelists, and journalists documenting the current South African landscape. One recent episode features an interview with Claire L. Bell, author of Lost Where I Belong, controversial for its exploration of racism.

Badilisha is both an online audio archive and a radio-style pan-African poetry show. It now features what’s said to be the largest online collection of African poetry in the world, presenting more than 500 African poets from 28 different countries.

Hosted by British journalist Alex Clark, the monthly Vintage Books Podcast features writers from across the Penguin Random House division’s output. With a sound that’s rather like a BBC radio program, it’s for those who enjoy literary fiction and who also want some peeks behind the scenes at their favorite authors’ lives. Recent episodes have covered Andrew Solomon’s Far & Away and Man Booker Prize news.

The New Yorker’s six podcasts include “Fiction” with editor Deborah Treisman and “Poetry” with editor Paul Muldoon. Each podcast includes a compelling mix of readings and conversation. There’s now a “Writer’s Voice” podcast in which short stories published by The New Yorker are read by their authors. Like the Vintage Books Podcast, these are well-produced podcasts, they’d sound at home on quality radio outlets.

This podcast is from the Oxford International Centre for Publishing Studies. It offers recorded sessions from visits to the program by industry figures including Eric Huang, Michael Bhaskar, and Joanna Prior.

And for those who still are wild about Harry, this Potter podcast from the fan site MuggleNet.com has been releasing two episodes a month since 2005.