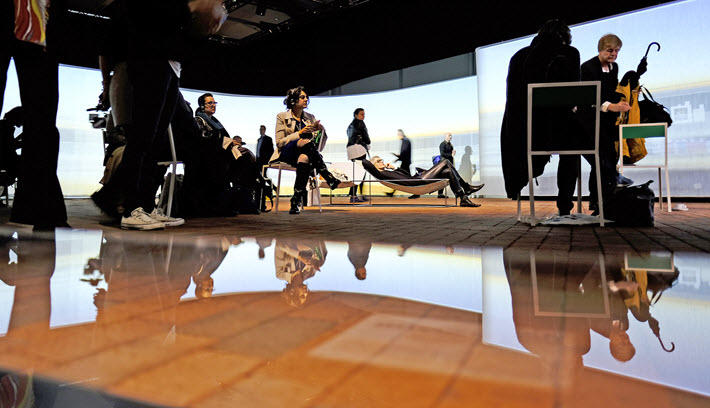 Even as France takes on the mantle of Frankfurt Book Fair’s Guest of Honor project for 2017, the leadership of the 2019 Guest of Honor program visited the Flanders and The Netherlands pavilion last week, teeing off a three-year effort. In speaking with Oslo’s minister of culture, we learned that “further private investment and a higher employment rate” for artists are part of the attraction of being Guest of Honor.— Porter Anderson

As Norway begins to conceptualize its Guest of Honor program for Frankfurt Book Fair 2019, a delegation made the journey to Germany last week, led by Oslo’s minister of culture, Linda Hofstad Helleland. and NORLA’s (Norwegian Literature Abroad) director, Margit Walsøe. Publishing Perspectives met with Helleland and Walsøe for an interview at the Guest of Honor pavilion, which this year featureed Flanders and The Netherlands.

It was Helleland’s first visit to the Fair. Walsøe has years of Frankfurt experience behind her, in part because NORLA considers the Frankfurt Book Fair, she says, one of the most important events on its calendar.

The Flemish and Dutch organizing committee shared some of itsexperience with the Norwegian delegation, with special attention to what it takes to organize such a large-scale program.

Norway’s government is funding the Guest of Honor project with 30 million kroner ( €3.5 million or US$3.8 million).

NORLA is to be in charge of the project, and upon returning from Frankfurt, is on track to form its organizing committee. Helleland said she expects involvement from private foundations and also says she hopes to see strong engagement from the business community.

“We will, of course, focus on our biggest names, but we’ll certainly also use the attention they get to shed some light on the many new and talented voices in Norwegian literature.”Linda Hofstadt Helleland

The Norwegian government has recently announced an ambitious cultural program, with an explicit intent of drawing international attention to Norwegian artists and their work. The ultimate goal is to establish long-term relationships and joint ventures between artists and private sector.

“We see so much great potential in Norwegian artists, whether they’re writers, painters, musicians or others,” Helleland told Publishing Perspectives.

“We believe that if we succeed with activities like the Guest of Honor project, we’ll see further private investment and a higher employment rate, as well.”

Walsøe said that that she considers this coming year a crucial stage in the preparations for a successful program in 2019.

“We are working to organize exchanges between key people [publishers, translators, authors, agents] in Norway and Germany,” she said. “There will be visits, conferences, and exchanges of ideas.”

Helleland said she plans to use this strength. “We will, of course, focus on our biggest names, but we’ll certainly also use the attention they get to shed some light on the many new and talented voices in Norwegian literature.”