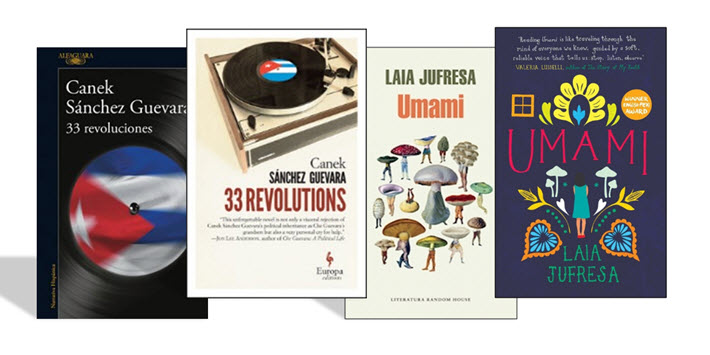 Literature from Latin America may well capture many rights buyers’ attention at this year’s Frankfurt Book Fair, with a solid line-up of debuts and works by well-established writers poised to cross the Atlantic.

Cristóbal Pera, director of the Spanish-language catalog at the Wylie Agency España in New York, tells Publishing Perspectives of continued interest in works in the language among readers and publishers.

“Without a doubt,” Pera says, “there’s a new generation of writers in Latin America and Spain, which has very diverse international references, but with Bolaño always in the background and no longer the so-called ‘boom’—with brilliant works that are more and more attracting the attention of foreign editors, critics and readers.”

The “boom” in Latin American literature refers to the 1970s and ’80s and, more specifically, Nobel laureates Gabriel García Márquez (1982) and Mario Vargas Llosa (2010), along with Argentina’s Julio Cortázar and Mexico’s Carlos Fuentes.

Posthumous Bolaño, and a ‘Common Homeland’

Among the authors whose works Pera will be offering in Frankfurt is the late Roberto Bolaño (1953-2003), the Chilean writer whose novels The Savage Detectives and 2666, published in English by Farrar, Straus and Giroux, caught the world’s attention, along with many of his shorter works of fiction, published by New Directions.

Bolaño’s posthumous work, El espíritu de la ciencia ficción (The Spirit of Science Fiction), is to be published this year and likely to be a hot property for publishers in many languages.

Set in Mexico in the 1970s, the novel charts the literary and romantic escapades of two Chilean aspiring writers, employing a range of genres, from epistolary novel to science fiction to satire, and which is described by the agency as “a masterpiece reminiscent of The Savage Detectives in scope, spirit, and ambition.”

Dating from the 1980s, the novel is to be published in November by Alfaguara, the Madrid-based imprint that has been part of Penguin Random House since 2014. Alfaguara also has announced a collection of three Bolaño novellas scheduled for 2017 releases, as well as a migration of all of the author’s 20 published works into digital format.

Referring to the upcoming publication, which is to be launched at the Guadalajara Book Fair in November, Alfaguara’s editorial director Pilar Reyes tells Publishing Perspectives that “The publication of El espíritu de la ciencia ficción, as with the successive releases of all Bolaño’s previous works—which exploded onto the Spanish-language and universal literature scene in such a compelling way—gives continuity to a cultural wager and a publishing initiative that aims to see all Spanish-language literature as one of a common homeland.

“Alfaguara has been the publishing house of the ‘boom’ authors,” she says, “and of the most outstanding writers of the following generations. Bolaño was the missing piece needed to create the most solid literary catalog in our language.”

Wylie’s Pera says he’ll also be promoting the Guatemalan novelist, short story writer, and filmmaker Rodrigo Rey Rosa’s (born 1958) latest work, Fábula asiática, to be published in English as Chaos—a work he describes as “exceptional” and which follows its story from Tangier to Patmos, from Mountain View to Istanbul.

It’s described as “a major new novel from one of our keenest observers of East and West, and a taut, haunting, powerful exploration of the urgent moral questions of our present historical moment.”

The recipient of the 2015 José Donoso prize for his body of work, Rey Rosa also has translated works by Paul Bowles into Spanish.

The Latin American list also includes rising stars of Cuba. José Manuel Prieto’s (born 1962) The Cuban Revolution Explained to Taxi Drivers, published in Germany in 2008 by Suhrkamp, is described by Pera as “one of the most original and surprising personal essays on Cuba ever written.”

Author Francisco Goldman has described Prieto as “the most exciting and original talent of his generation.”

Jorge Enrique Lage, born in Havana in 1979, is the author of three novels and five short story collections, and his novel Libros raros y de uso (Rare and Used Books)—set in the Cuban capital in the near future—is slated for October publication.

In describing the work, Wylie’s catalogue commentary says, “Working at the borders of cyber-literature and science fiction, Lage has long enjoyed a sterling reputation in his home country. He takes a great step forward in Libros raros y de uso, whose layers of meaning paint an essential portrait of modern-day Cuba—at once familiar and strange, suspended in time yet transforming day by day.”

Mexico’s Mario Bellatin (born 1960), an award-winning author of experimental fiction and a Guggenheim Fellow, is to publish Las vacas de Lydia Davis (Lydia Davis’ Cows) in November. It’s the author’s take on the moroa mongatari, a post-Hiroshima Japanese narrative tradition whose protagonists are disabled. In it, a “failed writer” named Bellatin hosts a literary workshop in a hospital featuring Lydia Davis’s chapbook The Cows.

A one-time recipient of a Frankfurt Book Fair residency, Horacio Castellanos Moya (Honduras, 1957)—author of 10 novels and a half-dozen short story collections on Central American politics—is to publish his new novel La barahunda (Hubbub) this year. It’s the story of two Salvadorans in the US, in search of the truth behind the death of their compatriot, the poet Roque Dalton, accused of being a CIA agent.

Víctor Hurtado, founder and director of the VicLit agency in Barcelona, which specializes in Latin American authors, also gave Publishing Perspectives a preview of what his rights buyers can expect at Frankfurt this year. Mexico’s Laia Jufresa’s (born 1983) debut novel Umami was hailed as one of the Big Indie Books of Fall 2016 by Publishers Weekly, and described by Vogue as “a darkly humorous tale.” The English edition of Laia Jufresa’s ‘Umami’ is translated by Sophie Hughes.

Set in Mexico City using multiple narrators, Jufresa’s writing has been described by her fellow Mexican novelist Valeria Luiselli as “serious and playful in equal measure, her observations at once brutal and full of empathy and tenderness.”

Published in English by Oneworld, the rights have also been sold in France, where the book won the Premier Roman de Chambéry for a debut novel in Spanish; and in The Netherlands, Poland, Italy and Turkey. The novel’s English translation is by Sophie Hughes, winner of an Enligsh PEN Translates Award for the work. ’33 Revolutions’ is translated to English by Howard Curtis.

Another book that has scored multiple rights sales is 33 Revoluciones by Cuban-Mexican Canek Sánchez Guevara (Havana, 1974; Mexico City, 2015), published in English by Europa Editions in a translation by Howard Curtis.

Based in disillusionment with life in contemporary Cuba and the post-Revolution reality, the book is the first publication from the grandson of Ernesto “Che” Guevara, who died from complications during heart surgery in Mexico last year, where he’d lived and worked as a journalist since 1996.

The rights to 33 Revolutions have so far been sold in 13 territories, including Brazil, China, Croatia, France, Greece, Italy, Japan, and The Netherlands.

Colombian Giuseppe Caputo’s (born 1982) debut novel Un mundo huérfano (An Orphan World), published by Literatura Random House in 2016, sold out in a fortnight in his home country, where it has caused a sensation, Hurtado says.

“With a setting reminiscent of Baz Luhrmann’s Romeo and Juliet, and characters as deliciously ambiguous, vivid, and category-defying as Angela Carter’s Nights at the Circus, An Orphan World is a visionary novel about sexual orientation, loneliness and love, set in a world of both prejudice and order, and dazzling, chaotic liberation,” according to Sophie Hughes, the book’s translator.

“Readers will be moved by this novel,” says a blurb from Horacio Castellanos Moya, while fellow Colombian author Laura Restrepo is quoted saying, “Caputo has rewritten Colombian violence. Original from beginning to end, An Orphan World starts from the known and raises it to a dazzling and rarefied strata of consciousness…It is the birth of a great author.”