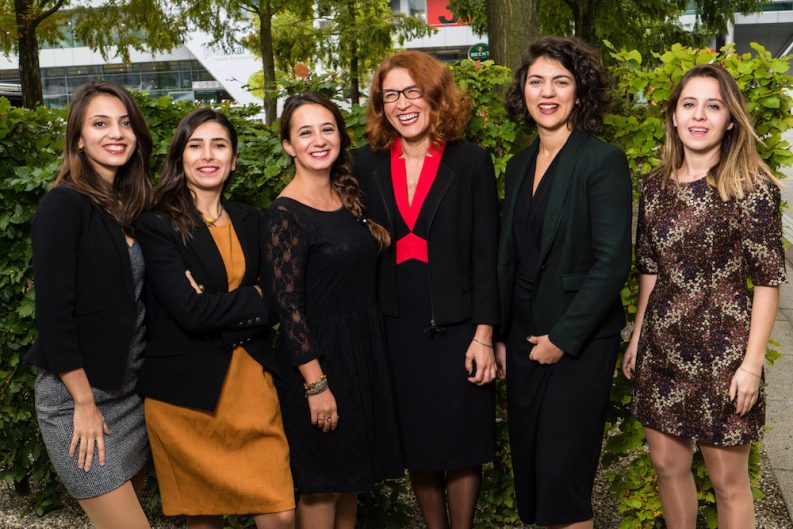 Charismatic and full of energy, Kalem Agency founder Nermin Mollaoğlu has been a leader in Turkey’s rights business for over a decade. Istanbul’s Kalem Agency—which takes its name from the Turkish for “pen”—is celebrating its 10th anniversary at Frankfurt this year. And if you see any of the Kalem folks today, they may look a little bleary from last night’s party at Waxy’s Irish Pub on Taubenstrasse.

Nermin Mollaoğlu, Kalem’s charismatic founder, is famed for her energy and positive outlook—and is a familiar face on the international publishing circuit. Publishing Perspectives spoke with her about the history of her agency and how she feels about reaching a decade of its success.

Publishing Perspectives: The Kalem Agency is ten years old. Congratulations! How does it feel?

From the first day, I was lucky that our agency received so much support, especially from my friends in European publishing.

I cried a lot, especially in the beginning. I worked without any success for months. It was my choice. I could have been working at some other business—and probably would have earned a lot more! I still don’t have a new season Hermes bag. Who cares? I am so happy with what I carry in my red Longchamp now.

PP: Can you remember your first deal?

NM: Of course, how can one forget that? It was a national holiday in Turkey. I got the offer email from an Italian publishing house for Şebnem İşigüzel. I didn’t pay attention to the terms—I just read the subject line, “The offer for Sebnem İşigüzel’s novel Ivy.”

I started to jump up and down in the middle of living room.

PP: What’s changed since you began working as a literary agent?

NM: Turkey has changed over these ten years, and Turkish publishing has changed, too.

I’ve enjoyed seeing the rise of new, small publishers. Ten years ago, most of the publishers didn’t know what a royalty statement meant, and there are still some who aren’t aware yet. However, the situation has improved.

Some foreign publishers used to look at Turkey as an add-on, but now they understand that they can earn large sums of money here.

For example, sales of [Ahmet Ümit’s] latest novel have reached some half-million copies already. His novels have already sold more than three million copies in total and are available in more than 20 languages.

PP: How many writers do you represent today?

NM: We represent more than 100 Turkish writers, although our agency income is from fewer than 10 percent of these writers. We are 12 people in the office and only myself and my new şahane junior agent Gizem Özgüven work for Turkish authors. The rest of the team works for our foreign clients who are published in Turkey.

We have a huge list of publishers and agents we represent in the Turkish market. We also represent translators from all languages. Believe it or not, there is still a huge need for good English, French and German translators.

PP: In the last 10 years, which international markets have been best for you?

NM: In the beginning, it was all our neighboring countries. That wasn’t a surprise. They know our DNA, our history, our faces, our tourist seaside villages, etc. Moreover, it’s easy to find good translators because of immigration and many mixed marriages.

Our new successful markets are China and Poland, and our subagents in these markets work hard and very closely with us. We have had many auctions in Poland, China and Taiwan this year. A competent subagent can make your life easier and happier as our subagents Gray Hawk and Booklab do for us.

PP: Where and when were you born? Where did you grow up?

NM: I was born in a small village called Podayva, near the Black Sea coast of Bulgaria, in 1975. When I was three years old, my family moved to Istanbul. [My parents] were both factory workers. They never read novels in their lives. They didn’t read newspapers, either. We didn’t have a bookshelf at home. And yet I’ve never met a set of parents who supported their children’s education as much as they did for my sister and me. For example, they sold their small summerhouse to send me abroad one year to learn English.

Eight years ago, when we started to organize the ITEF (Istanbul Tanpınar Literature Festival), we couldn’t find sponsors, so my father offered us his old Renault to sell and invest in the festival. We didn’t get his car sold, but I bought him a nice Jeep a few years ago!

PP: What did you do before starting Kalem?

NM: I worked at YKY publishing house as the rights coordinator. I was the first person who was hired, and the only rights coordinator in Turkey. Before me, the editors, publishers, translators–even an aunt of the company owner–dealt with rights issues.

Now, many good publishers have rights departments and take the responsibility very seriously.

After establishing Kalem Agency, I learned that Kalem means pen not only in Turkish, but also in many other languages. It was a lucky name indeed. •