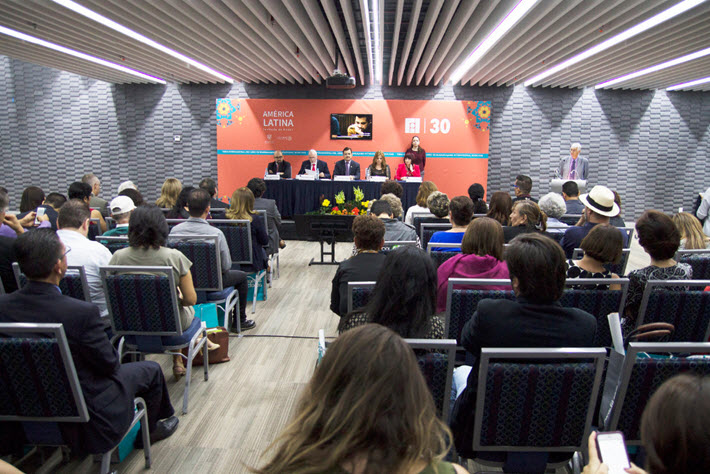 Latin America is guest region of honor at this year’s Guadalajara Book Fair. Along with 650 writers from 44 countries, the fair will host a rights exchange program. The Guadalajara International Book Fair (Feria Internacional del Libro de Guadalajara or FIL)—the Spanish language’s largest—reaches its 30th anniversary edition with Latin America as guest region of honor, the first time the invitation has been extended to a region since 2010, when Spain’s autonomous community of Castille and León was the guest.

The fair runs from November 26-December 4 at Expo Guadalajara.

A news conference this week laid out plans for the fair to host 120 writers from the region, dozens of whom are renowned for their work. Included are Peru’s Nobel laureate Mario Vargas Llosa, who will be the recipient of a special homage to mark his 80th birthday.

Other Latin American writers on the male-heavy bill include both established and rising stars, including:

The fair will also feature a program focusing on writers born in the 1980s, bringing together 20 authors from across the region.

As we earlier reported, Romania’s Norman Manea is also expected to attend, and is to be the recipient of the fair’s 2016 Romance Languages Prize.

The Latin America focus has provoked interest among foreign rights directors from around the world.

“The program aims to forge links with countries where it’s less likely that Ibero-American writers are read,” Padilla Cortés said.

In addition to the focus on Latin America, the fair will also feature forums to enable dialog with authors from the Spanish region of Galicia, as well as from Quebec and Norway. The Destinação Brasil program, now in its fifth year, will pay special attention to that market with 10 writers on hand.

The sixth edition of the Festival of European Letters will feature the participation of writers from Austria, Croatia, Finland, France, Germany, Italy, Poland, Romania, the Netherlands, Slovenia and Spain, while the Latin American “playwrights’ encounter,” now in its third year, is to feature Pablo Paredes, Fernando Rubio, Eleonora Fabiao and Rodrigo Parrini.

The international short story writers’ encounter will this year be dedicated to Mexican Ignacio Padilla, who died in August. His compatriot Luis González de Alba, who committed suicide in Guadalajara on October 2, will also be honored.

Spanish poet Antonio Gamoneda, a recipient of the Cervantes Prize, is scheduled to inaugurate the poetry salon, in which 18 poets from 13 Latin American countries will participate.

Parallel to the fair, visitors will also be able to view an exhibition of modern and contemporary Latin American art and engage in a regional cuisine festival as well as nine performances of live music and theater in the outdoor venue adjacent to the fair.