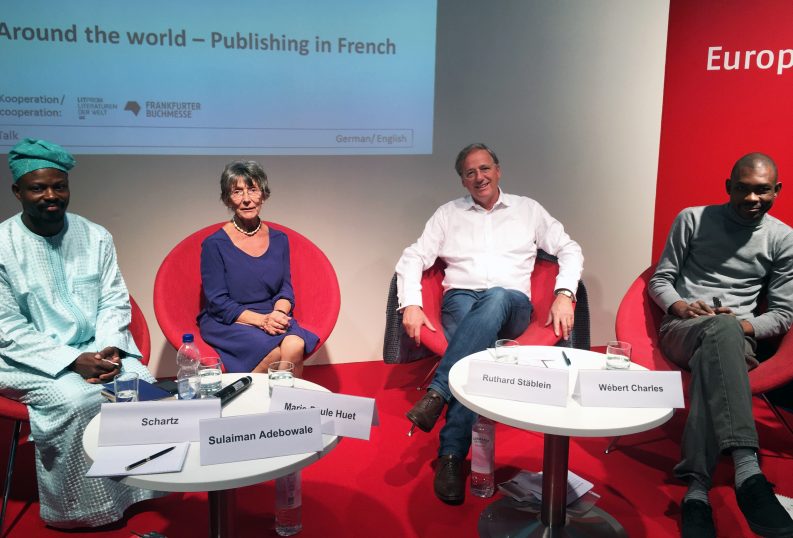 France will be the Guest of Honor at the Fair in 2017, and the concept of Francophonie in literature is more present than ever, with prize-winning French-language authors such as Alain Mabanckou or Boulem Sansal consistently on the French publishing scene.

But where does this leave francophone publishers outside France, and is it possible to imagine a publishing world in which Paris is not at the center?

Port-au-Prince-based Wébert Charles of Legs Editions notes most Haitian authors are published from France, and it is very difficult for a Haitian publisher to compete.

Marie-Paule Huet of Editions Ganndal in Conakry describes how, following decolonization, Guinea became a dictatorship. Guinean authors had to express themselves from France, she says, adding that France was very attractive for authors because of its larger readership. Even after the end of Guinea’s dictatorship, many authors still choose to publish in France.

Distribution, poverty, illiteracy and availability are major challenges. The situation in Guinea is desperate, says Huet. There are 2 million people and two bookshops; most of the books available are schoolbooks. Charles notes the situation in Haiti is similar, with 2 million people and three bookshops. “You would think there would be crowds in front of the bookshops, but illiteracy is a real problem and books remain a luxury product,” he says.

In Senegal, according to Dakar-based Sulaiman Adebowale of Amalion Publishing, the challenge is money: “publishers are small and medium enterprises who can’t get past the distribution problems, because we lack resources.”

In answer to the question of whether they feel far from the “center” of publishing, Adebowale replies that he doesn’t agree with that definition of ‘center:’ “We want to penetrate the local market,” he says. “If you can conquer your local market then that’s already a really good thing.”

“Haiti is far from Paris but also from all Francophone areas besides Québec,” says Charles. “In the US, there are pockets in academia within universities that want to talk about new Haitian writers.”

All three publishers will be present in 2017, and hope to show just how hybrid French publishing has become.