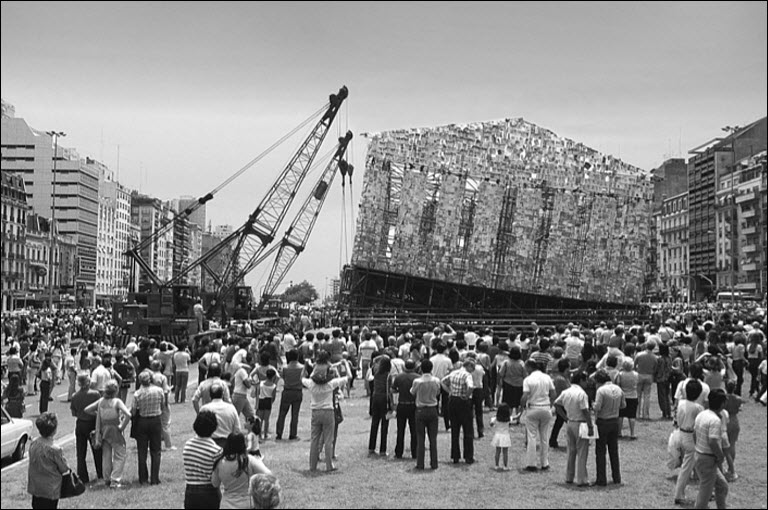 ‘The prohibition of books betrays so much about their times and political order,’ says Frankfurt’s Juergen Boos ahead of Book Fair’s presentation of documenta 14’s new ‘The Parthenon of Books.’ ‘Democracy Without Books Is Not Democracy’

The first artwork of documenta 14—a major installation protesting the censorship of free speech and the persecution of artists—will be the subject of a key event at Frankfurt Book Fair on the trade show’s second day, Thursday, October 20.

A press talk on that day at Buchmesse features the Buenos Aires-born artist Marta Minujín, whose The Parthenon of Books installation is designed as a symbol of rejection of any bannings of writings or persecution of authors.

At 2:30 p.m. on the 20th at Book Fair’s Open Stage in the Agora, Minujín will be joined by Juergen Boos, director of Frankfurt Book Fair, and by Adam Szymczyk, artistic director of documenta 14. Szymczyk’s subtitle for documenta 14 is “Learning From Athens,” and the 2017 quinquennial exhibition is purposefully divided between the Greek capital and Kassel, Germany.

Documenta is a series of contemporary art exhibitions held at five-year intervals. The next regular iteration is 2017, and the event this month at Frankfurt represents the first evocation of what’s to come as documenta 14 is mounted next year. In speaking to Zoë Lescaze for ArtNews, Szymczyk says, “What interested me is that Athens is a contemporary metropolitan city of the Mediterranean that is connected to other places across the water. It borders Turkey, it has an influx of migrants coming all over the place–Asia, Africa, and so forth. It’s a figure of a larger situation that Europe has to confront, and I hope it will confront with this exhibition…I see [Athens] as a portal or border or place where people coming from many, many other places can have visibility.”

And so it is that Minujín’s’s The Parthenon of Books echoes the 1983 installation, El Partenón de libros, which followed the collapse of Argentina’s dictatorship. In that case, the structure held books banned by the junta. At the end of that exercise, viewers were allowed to retrieve the formerly banned books and pass them out among the citizenry—censored literature being returned to the populace.

As is explained in an article at documenta14.de, El Partenón was part of the series “La caída de los mitos universals,” or “The Fall of Universal Myths.” In that series of works, the artist appropriated universally recognized icons, such as Athens’ Parthenon, “in order to replicate them, break them up into pieces, and redistribute them in the public realm.”

“Censorship, the persecution of writers, and the prohibition of their texts motivated by political interests…are once again widespread today.”Adam Szymczyk, documenta 14

For the new The Parthenon of Books, Minujín is collecting up to 100,000 previously forbidden books—either currently being re-published or still suppressed. And on June 10 of next year at Kassel, the new installation will be revealed to the public for a 100-day run.

It’s helpful to know that the site of the new installation—the 2017 edition of The Parthenon of Books—will be Kassel’s Friedrichsplatz, That’s the spot on which some 2,000 books were burned by the Nazis on May 19, 1933, in what was termed an Aktion wider den undeutschen Geist, or, “Campaign against the Un-German Spirit.” Minujín’s new presentation of her Parthenon thus is meant to stand as a kind of temple to freedom on the very spot at which the forces of oppression once were in fiery control.

Minujín’s comment associated with this part of her work is, “Democracy without books is not democracy.”

You’re invited to donate books to the exhibition during Frankfurt Book Fair’s dates, October 19 through 23, so that those books can become part of the new installation. After the Fair, collection of books will continue at documenta 14 offices in Kassel and Athens. As happened in 1983, the close of documenta 14 is to include a return to circulation of banned books from the installation.

A feature of the documenta 14 dual-city context is that Athens and Kassel are to share the role of key venue for the exhibition on an equal footing. The Athenian element of the show is to run from April 8 through July 16 next year. And the part of the show set in Kassel is to be there from June 10 through September 17. In a prepared statement on the Frankfurt Book Fair event with Minujín and Szymczyk, Boos is quoted saying, “Books have the ability to question power and politics. This is what makes them so important for a liberal society.

“This is also the reason why the prohibition of books betrays so much about their times and the respective political order.

“The installation The Parthenon of Books by Marta Minujín uses books that were previously banned to present them at documenta 14 in Kassel. We are delighted that the foundations for this inspiring work will be made at this year’s book fair and hope for a lively participation from our exhibiting publishers and authors.”

For his part, Szymczyk clearly makes the connection with various political conditions and developments on the contemporary scene. “Censorship, the persecution of writers, and the prohibition of their texts motivated by political interests and attempting to influence our thoughts, our ideas, and our bodies,” he says, “are once again widespread today.

“The Parthenon of Books sets an example against violence, discrimination, and intolerance.”

In addition to documenta 14’s program at the Agora, the documenta Archive will be hosted as part of Book Fair’s all-new THE ARTS+. That program includes a workshop on October 21 in THE ARTS+ fairgrounds to develop strategies to digitize the documenta Archive and make it available globally. The essential intent of THE ARTS+ in its debut at Frankfurt this year is to discuss the possibilities of digitization in the cultural and creative industries.

For more on issues of book bannings and censorship, see our report on PEN America’s “Missing From the Shelf” study, issued during Banned Books Week.