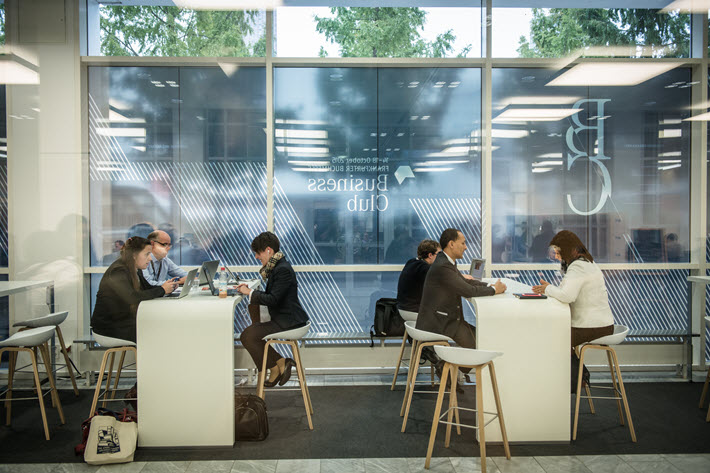 The Business Club at Frankfurt Book Fair has become a popular hit both with serious deal-makers in international publishing and with industry leaders curious about complex issues and personalities in the books business today.

Now in its third year at Hall 4.0, the Business Club provides concierge services for the greeting and handling of guests; reserved tables for member meetings in a comfortable setting; food; drink; and more amenities that help trade visitors with an alternative to the display floors of the Fair for meetings and events.

But as a news release from Fair organizers sums up, the club setting has become a center of programming in its own right: some 80 speakers are to be heard this year in 40 events at the Business Club, raising its own programming to a new level of visibility and importance throughout the week.

And additional expert observations come from a range of specialists, from Milan’s Michele Foschini of BAO Publishing on marketing bestsellers in Italy, to a breakfast focus on literary trends in Ukraine, Slovenia, Georgia and Russia; and from a talk on the impact of literary awards on the market to a discussion on the effort to build young readership in Indonesia and Southeast Asia, with Claudia Kaiser and Salman Faridi.

In connection with young readers, Frankfurt Book Fair has renewed its support of six initiatives for young talent in cooperation with leading international trade magazines. The winners of those initiatives are speaking at 4:30 p.m. each Fair day on the Business Club Stage in the Newcomers on Stage series.

Today (October 18), the Business Club is the setting for The Markets: Global Publishing Summit, the conference co-produced by the Fair and Publishing Perspectives that features comments from analysts, visionaries and business players from seven pivotal regions: The Philippines, Brazil, Spain, Flanders and The Netherlands, Poland, the UK, and the United Arab Emirates.

For a taste of some of the wide range of astute, actionable commentary coming to The Markets, see our series of interviews with many of the key speakers being heard in today’s sessions and networking conversations. Perhaps of special interest to many will be a session on social reading with Peter Paul van Bekkum and Toine Donk on Friday (October 21).

And Francophones will have the Business Club’s Business Breakfast Thursday (October 20) on their calendars when next year’s Buchmesse Guest of Honor, France, is featured in a concentrated look at the most significant trends in the French market today.

As organizers tell us in a prepared statement: French is the native tongue of more than 200 million people. France–the country has produced the largest number of Nobel laureates in literature (15).”

That event is supported by EU’s ALDUS, the network of European book fairs, with support from the European Union’s Creative Europe program.

Meanwhile, if you’d like to be in touch with the 2016 Business Club Ambassadors group, the program comprises:

The full schedule of programmed events at Frankfurt’s Business Club is here.