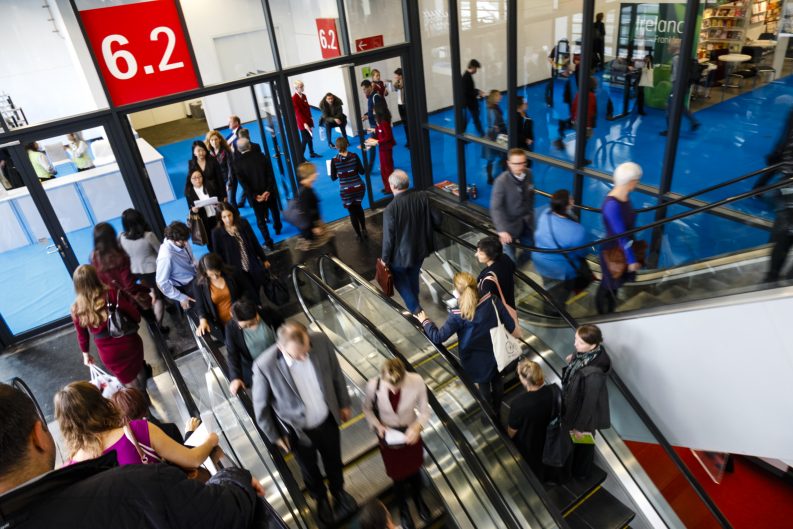 Much more from Frankfurt Book Fair 2016 is in our Publishing Perspectives Show Daily editions. Download them all here, free of charge.

A Slight Rise in Trade Attendance

The Frankfurt Book Fair’s press office estimates that a total of  277,000 visitors attended the 2016 Fair, including both professional and public attendees.

Trade visitor numbers, according to statements from Frankfurt, showed a 1.3-percent increase over 2015’s figures, coming in at 142,300 last week, as opposed to 140,474 the previous year.

Preliminary indications are that the general public attendance level was similar to that of 2015, or some 135,300 people, according to press manager Kathrin Grün.

Also of note in terms of attendance, the Business Club of the Frankfurter Book Fair was in its third year and drew more than 3,400 visitors from 74 countries.

A total 1,200 appointments were made using the online booking tool for the Business Club. As Publishing Perspectives reported in July, the German author, essayist and journalist Carolin Emcke has been named as recipient of the Peace Prize of the German Book Trade for 2016, and the award was conferred on her Sunday (October 23) at a ceremony reportedly attended by roughly 1,000 invited guests, including German President Joachim Gauck.

The award presentation was held at the Church of St. Paul in Frankfurt and the speech honoring this year’s recipient was given by philosopher Seyla Benhabib.

In her acceptance speech, Carolin Emcke called on us all to work together to create a peaceful and democratic society.

“We must not allow ourselves to be rendered defenseless and speechless,” she’s quoted as saying. “We can speak and act. We can take on responsibility. In other words, we can intervene actively in word and deed in this increasingly brutalized world.”

In its news release on the event, the Frankfurt Book Fair says that Emcke also drew attention to the climate of extremism and violence in Europe today. “This exclusionary fanaticism damages not only those it seeks to victimize; it also hurts all of us who wish to live in an open, democratic society. The dogma of the pure, homogenous and Völkisch (nationalist-racist) constricts our world. It diminishes the space in which we can think and see each other.”

“Human rights are not a zero-sum game. Nobody loses their rights when they are granted to all.”Carolin Emcke

Emcke told her audience Sunday that all members of civil society are called upon to work against fanaticism, hate and violence: “In order to achieve this,” she’s quoted as saying, “we need to have trust in what makes us human: the capacity to begin. We can start over again, as individuals but also as a society. We can shatter our inherited flexibilities, dissolve the structures that constrict and oppress us, move forward and discover new forms together.” Emcke also is reported to have made a plea for inclusion in society: “Human rights are not a zero-sum game. Nobody loses their rights when they are granted to all. Human rights are unconditional. They cannot be earned, nor must they be earned. There are no preconditions that must be met before a human being is recognized as such and protected. Affection or dislike, approval or distaste for individual lifestyles, social practices and religious convictions cannot be allowed to play any role in this realm. This notion is the very essence of a liberal, open and secular society.”

In her comments, Benhabib reportedly emphasized Emcke’s craft as a storyteller, noting that her “masterful art of narration” enables her to speak of things in a way that triumphs over silence: “Emcke, as storyteller, has developed a unique blend of reportage, philosophical reflection and literary construction through which she ‘bears moral witness’  to human pain in armed conflict situations but also to another kind of pain and silence experienced by those who are different – different, sexually, psychologically, religiously, ethnically.

“Such narrative redeems the pain of the untold; breaks down the walls of silence and hurt which create the trauma of the unsayable,” said Benhabib.

The prize has been awarded by the German Publishers and Booksellers Association on the final day of Frankfurt Book Fair since 1950. Among previous recipients of the Peace Prize are Amos Oz, Albert Schweitzer, Astrid Lindgren, Václav Havel, Jürgen Habermas, Susan Sontag, David Grossman, Liao Yiwu, Svetlana Alexievich and, in 2015, Navid Kermani. The Prize is endowed with a sum of €25,000 (US$27,200).