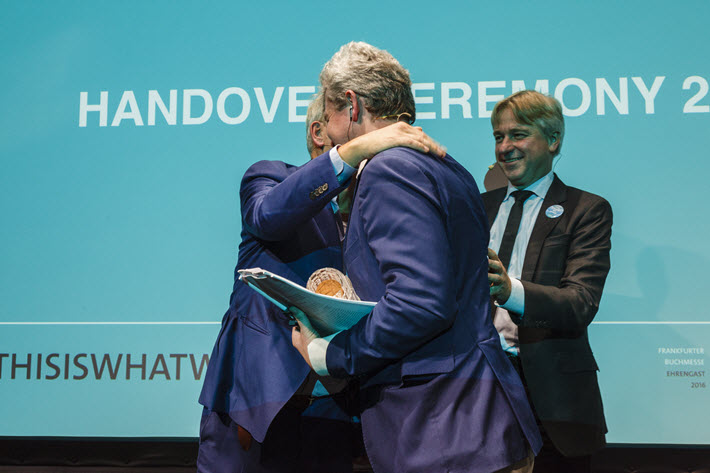 A note of expressive defiance is heard as French officials take on Frankfurt’s Guest of Honor effort for 2017: ‘With Germany, we want the youth of Europe to stay open to the world.’ Frankfurt Book Fair’s director, Juergen Boos, looks on Sunday (October 23) as the GuestScroll is passed from Flanders and The Netherlands to France for the 2017 Guest of Honor program. Image: Frankfurter Buchmesse, Marc Jacquemin

‘Stay Open to the World’

You might be forgiven for having déjà vu at this point. France was indeed Frankfurt Book Fair’s Guest of Honor almost three decades ago, in 1989.

“With Germany, we want the youth of Europe to stay open to the world. And with francophone literature translated into more than 40 languages, the French language reaches out beyond frontiers.”Paul de Sinety

Speaking on Sunday (October 23) at the official Guest of Honor handover ceremony from Flanders and The Netherlands to France, Francfort en français chair Paul de Sinety said, “This invitation is an opportunity to deliver strong messages: Culture, the book and writing itself are central to the welcoming of the other.”

The annual ceremony in which the Guest of Honor mantle is transferred involves a “GuestScroll,” which carries a designated literary quote from each Guest of Honor program.

In translation, the line refers to the rewards of translation, both in embracing another language and in knowing the thoughts of another people: “Linguistic hospitality, in which the pleasure of inhabiting the language of others is repaid by the pleasure of receiving the word of the stranger in one’s own home.”

De Sinety said, “With our first partner, Germany, we want the youth of Europe to stay open to the world. And with francophone literature translated into more than 40 languages, the French language reaches out beyond frontiers and carries the essential values of freedom and hospitality within itself.” In his parting comments on Sunday, Flanders and The Netherlands’ artistic director Bart Moeyaert said, “I suggest we don’t part in a mood of farewell. We shouldn’t keep a static image of ‘Flanders and The Netherlands’ in our minds, but a movement we’ve ignited. It’s about sharing one’s language, dynamics, and history, in the sense of past and future. After having been Guest of Honor in 1993 and in 2016, the story continues. I hope we will remember this intense and enriching time, and pass on this positive experience.”

Moeyaert’s associate Bas Pauw, who managed the 2016 effort, said, “Like German, the French language is one of the greatest languages which surround the ‘low countries’ and have always enriched our culture and our literature, and will continue to do so. It was an honor and a great pleasure to be invited by the Frankfurter Buchmesse, and thus also by our German neighbors.

“We’re delighted to have the privilege of handing over this privilege to our Southern neighbor, France. We’re already looking forward to France’s Guest of Honor presentation in the upcoming year. Bon courage!” ‘To Create an International Network’

“The Guest of Honor of Frankfurter Buchmesse has the opportunity to create an international network, to intensify its trade in rights and licenses and to present itself not only with its literature, but also as a cultural region.”Juergen Boos

Special ties between France and Germany were in the fore on Thursday (October 20) during a news conference at Frankfurt attended by French Prime Minister Manuel Valls.

Both countries have reciprocally committed themselves to the harmonization of the rights of cession and the promotion of the fixed book price at a European level.

In a prepared statement issued Sunday from Frankfurt, Boos is quoted as saying, “Every year, the Guest of Honor of Frankfurter Buchmesse has the opportunity to create an international network, to intensify its trade in rights and licenses and to present itself not only with its literature, but also as a cultural region. “Flanders and the Netherlands have made use of this opportunity in an excellent way, in every respect. For those 12 upcoming months we wish the French committee a lot of strength, creativity, and joy for the preparation of their Guest of Honor presentation in 2017.”

As the French Guest of Honor program gets underway in January, the French language and its literature will be celebrated in three major themes, according to Frankfurt’s press office:

Events are expected to highlight novels, specialized books, children’s and YA literature, comics and poetry, and also new artistic currents. In addition to events at many cultural locations in Frankfurt, readings, exhibitions, and other events will also take place in other German cities. A note is passed from Frankfurt Book Fair’s outgoing Guest of Honor team from Flanders & The Netherlands to the 2017 leadership from France. Image: Frankfurter Buchmesse, Marc Jacquemin