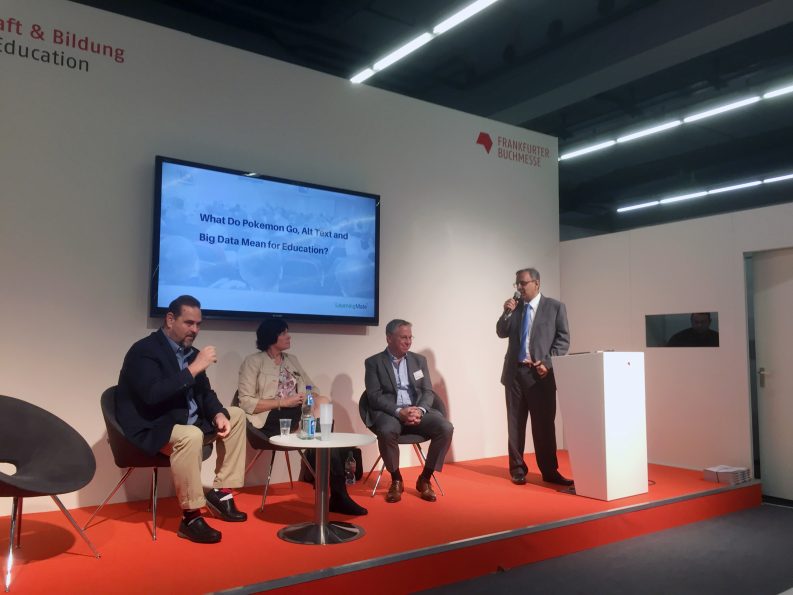 “I’m sure taxi cab drivers now wish they had been better before Uber came along,” laughs Jim Donohue, executive vice president and chief product officer of Cengage. “However, Uber’s success isn’t down to some wild new idea; they just do it better.”

Donohue was on the Education Hot Spot Stage at Frankfurt Book Fair on Wednesday (October 19) to consider the question: “What Do Pokémon Go, Big Data, and Alt Text Mean for EDU?”

Pokémon Go, the free-to-play, location-based game, has brought augmented reality into the mainstream by allowing users to hunt down and capture virtual animals using their smart phones.

A panel chaired by Samudra Sen, CEO of Learning Mate Solutions, discussed not the Pokémon Go game itself, but the lessons educational publishers can learn in using new technologies in an education sector that may stand at least a couple of years behind the cutting edge.

It’s also a sector that could be turned upside down at any time by the giants of Silicon Valley.

“The biggest challenge is to design a product based on the detailed study of how our customers are engaging with the content we produce,” said Joan O’Neil, executive vice president of knowledge and learning at Wiley. “We can now study it in a level of detail that has never been [possible] before. This will make sure that we don’t get ahead of what the customer is looking for and over-engineer our products.”

“Flexibility has become critical for us. The platform has become our differentiator,’ said Cengage’s Donohue. “We’ve invested millions of dollars in content management systems that take all our content to down to a paragraph level. It has set our content free.”

“When we get to the teacher in the classroom, how the technologies are actually used is quite startling,” he said. “The key, in my opinion, is the amount of investment we’ve put in to teach the teachers how to use this technology.”

For all the speakers, partnering with companies who have the technology publishers don’t have is the way forward.

“The technologies from Google or Microsoft aren’t the enemy—they are worth taking advantage of,” says Donohue. “Incorporating Google Search into our K–12 platform has really driven our sales instead of taking them away, because that is the way students search and find information today.”

“Of course,” Donohue admits, “there is always a threat from the these companies.