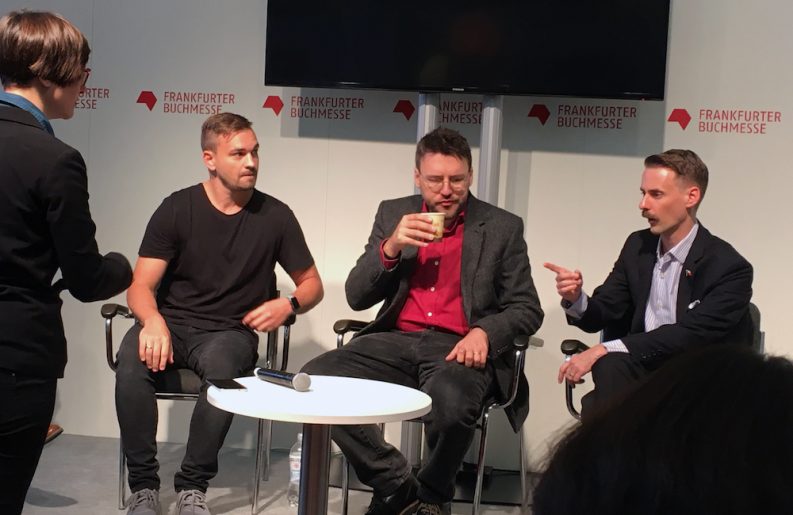 A new entry in the cross-platform community of storytelling, Cinestate is a book, audio, and film venture based in Dallas. ‘Trying To Break Down Walls’

There are so many “interesting parallels” to his new company’s name, Cinestate, says Will Evans. He’s given to such carefully chosen monikers, having named his nonprofit translation press Deep Vellum after a district in Dallas called Deep Ellum.

Cinestate can be thought of, in fact, as an attempt to take a fresh look at the state of film in its broadest sense, a state-of-storytelling effort in cross-media development.

“We’re not a publishing house and we’re not a film production studio,” Evans says. “We’re something entirely new.

Deep Vellum, as a translation press, continues to operate, Evans says, while he transitions from its executive director to the role of president at Cinestate where his business partner is Dallas Sonnier, the film-focused member of the duo.

Cinestate is putting its emphasis, Evans says, is on new material. “We would only consider a previously published book for development if it’s out of print,” Evans says, because they’d want the full panoply of rights to be unencumbered. “We’d love to do translations, but we’d want English-language versions of all those rights.”

There’s a clear, if overlapping, understanding, Evans says, between his own place and purpose in the new company and that of his partner Sonnier, too.

Sonnier, he says, “is a film producer who also loves audio and podcasts, and I’m a book publisher but I love movies and podcasts, especially paranormal podcasts.”

In conversations of the “what if” variety—as in “What would you do with Deep Vellum if someone gave you a blank check?”—Evans found himself thinking that he’d like to turn many of his favorite books into “a form of narrative audio using Hollywood actors for voices, and make movies of them. Because I have access to the world’s greatest stories.”

Sonnier had moved back from Hollywood to Dallas, his hometown, and the two took advantage of the moment to form their new venture. Having done shooting on one picture in New York, they’re scheduled to shoot a second in Dallas in November and December, Evans says.

“These aren’t Hollywood blockbuster” films, he says, “we don’t work with gigantic budgets right now, so we have the flexibility to shoot wherever we want. And if we can shoot in our own town and sleep in our own beds at night, that’s ideal.

The film shot earlier in the autumn in New York, their first, is called Brawl in Cell Block 99 with Vince Vaughn and Don Johnson.

“We’re privately financed,” Evans says. “In early 2017, we plan to seek out investment” but for the moment they’re able to shoot “between $2 million and $5 million budgets.” Brawl is coming in at $4 million, he says.

“Dallas [Sonnier] is film, I’m books,” he says, “but at the beginning, we’re both coming at it from very different industries.” And their first release, he says, will be “something we’re calling ‘Audiostate,’ which is taking unproduced film scripts and turning them into audio. Like a Hollywood film produced for sound. Can’t wait for it to be mixed.”

The Narrow Caves, the first of these audio efforts, is by S. Craig Zahler, who’s also the writer behind Brawl.

“We’re also trying to break down walls, so that I might sign a book and take it all the way through a production process. And Dallas could pick up a book project.

“But at the beginning now, I have a pile of book submissions, so we’re sorting through our launch list of books to come out next fall. Ingram’s Consortium will be our distributor,” as it is for Deep Vellum.

“And we’re not trying to reinvent the wheel, we’re just taking what we each do really well and doing it where we live.”

For more from Publishing Perspectives on Will Evans’ Deep Vellum, see these stories.