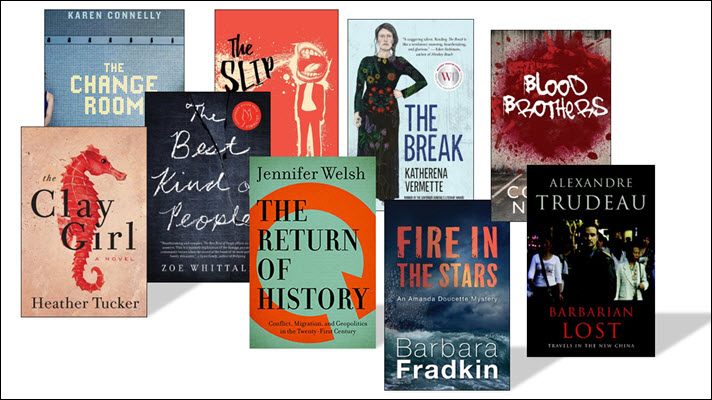 An impressive array of fiction and nonfiction is on offer this year at Frankfurt Book Fair, as Canadian publishers’ rights directors talk up their new books. Rights Directors Set Out Their Best

A quick survey of titles headed for Frankfurt Book Fair’s Literary Agents & Scouts Centre (LitAg) shows us a wide spectrum of premise and promise in new offerings for 2016 from Canada.

Here are quick looks at some of the prime examples to watch for. We’re glad to have these fast previews from Carolyn Forde, literary agent and international rights director at Westwood Creative Artists. “Gowdy has been called ‘the best writer of sentences of my generation’ by Giller Prize winning author Andre Alexis. “Karen Connelly’s long awaited novel, The Change Room—her first since the Orange Broadband Prize winning The Lizard Cage—is a change in direction: to a domestic page-turner.

“We’re excited to have this sexy novel from a literary star on our list.

“Roz Nay’s debut psychological thriller Our Little Secret—which has already been pre-empted in The Netherlands by Xander and is forthcoming Summer 2017 with Simon & Schuster Canada—is one we hope will create a stir in this hot category. “Heather Tucker’s debut The Clay Girl received a starred Publishers Weekly review, and has been making all kinds of indie lists. It was chosen for the Indies Introduce promotion in the US, and is on the Indie Next selection list for October, chosen as one of only two books featured in a new Word on the Street book club offering.

“The book just had its first rights sale in Romania. We’ve had several of our co-agents talk about their love for this novel and hope to find many more new publishing homes for it.” “Don Thompson’s Orange Balloon Dog, a look at the contemporary art scene—and a follow-up to his bestselling 12 Million Dollar Stuffed Shark and The Supermodel and the Brillo Box—has already sold in the UK, Czech Republic, and Germany. It looks to be a hot title for Frankfurt, as well.

“Newcomer Jamil Javani’s Why Young Men? is a look at radicalization by a young and dynamic young professor and thinker. Canadian rights were just acquired by HarperCollins.

“Alexandre Trudeau’s Barbarian Lost, by the younger brother of our prime minister, is a travel memoir of his time in China. He’s an intellectual and accomplished filmmaker and journalist.

“The book debuted at No. 1 on The Globe and Mail bestseller list.”

From House of Anansi Press From Gillian Fizet, rights director at House of Anansi Press, here are four titles the house will lead with at Frankfurt. “Just shortlisted this week for the prestigious Giller Prize, Zoe Whittall’s provocative aftermath novel about the unravelling of an all-American family is making big waves.

“Media response has been terrific—raves from several outlets including the National Post, The Toronto Star and Chatelaine—and our booksellers are getting behind it in a big way. Indigo, our major bookselling chain has just selected the book to be a Heather’s Pick, the equivalent in Canada to an Oprah’s Book Club selection.

“With exquisite emotional precision, Whittall explores issues of loyalty, truth, and the meaning of happiness through the lens of a family on the brink of collapse.” “Katherena Vermette’s unforgettable novel The Break has just been selected as a finalist for the Rogers Writers’ Trust Fiction Prize. When Stella, a young mother, looks out her window one evening and spots someone in trouble on the Break—a barren field on an isolated strip of land outside her house—she calls the police to alert them to a possible crime.

“A powerful intergenerational family saga, The Break showcases Vermette’s writing talent and positions her as an exciting new voice in Canadian literature. All three of our national newspapers—The Toronto Star, Globe and Mail, and National Post—are raving about this debut novel by a Governor General’s Literary Award–winning poet.

“Margaret Atwood recently tweeted: ‘The Break is an incredible feat of storytelling’ and we couldn’t agree more. Vermette’s debut novel tackles difficult issues that are too often overlooked while deftly bringing humour and, most importantly, redemption, to the page.”

“Several of us at Anansi took Button, Button home over the weekend earlier this fall and came back on Monday completely freaked out.”Gillian Fizet

“Warren Botts is a disillusioned Ph.D., taking a break to teach middle-school science. Gentle, soft-spoken, and lonely, he innocently befriends Amanda, one of his students. But one morning, Amanda is found dead in his backyard…

“We’re thrilled to be publishing Nicole Lundrigan’s Button Button on our Spiderline crime and thriller imprint. Several of us at Anansi took it home over the weekend earlier this fall and came back on Monday completely freaked out. It was our lunchtime conversation for at least a week, and I’m still getting chills just thinking about it.

“This is the kind of thriller that doesn’t leave you—it has you asking questions weeks later.” “The Return of History for me is ultimately a call to action,” says Fizet. “At a time when politics seem more barbaric than ever, Jennifer Welsh encourages us all to remember that our own liberal democratic society was not inevitable and that we must all, as individual citizens, take a more active role in its preservation and growth.” Fire in the Stars is by Barbara Fradkin, An Amanda Doucette mystery.

“Fire in the Stars starts a dramatic new series with a contemporary twist by one of our best authors,” says Bruder. “It’s a new, fresh take on sleuthing. Amanda Doucette is an international aid worker who suffered a traumatizing experience will serving in Nigeria.

“Fire in the Stars introduces us to Phil, another worker who was with Amanda in Nigeria. Phil is now living in Newfoundland, suffering from PTSD, and asks Amanda to come and help him.

“When Amanda arrives Phil has disappeared in the rugged Newfoundland landscape with his young son.” The Slip, by Mark Sampson.

“Mark is an accomplished writer who has turned his hand to a funny and insightful story about social media and viral culture. His character, Phillip Sharpe, on one bad afternoon and after two regrettable comments, goes viral for all the worst reasons. The Slip casts a wide satirical net on an era in which social media can amplify a gaffe into a full-on scandal in a matter of minutes, and it highlights the way social media can steer conversations for good and for ill.” “I love this story because it explores good friends who are as close as brothers.

“Jakub’s and Lincoln’s lives diverge when Jakub gets a private school scholarship and Lincoln is lured into a gang. This chillingly realistic book explores the difficult choices that some teens have to make as they come of age.

“I also love that Jakub’s graffiti is a major part of the novel; graffiti art is an increasing part of our urban landscape and is an important expression of their frustration.”