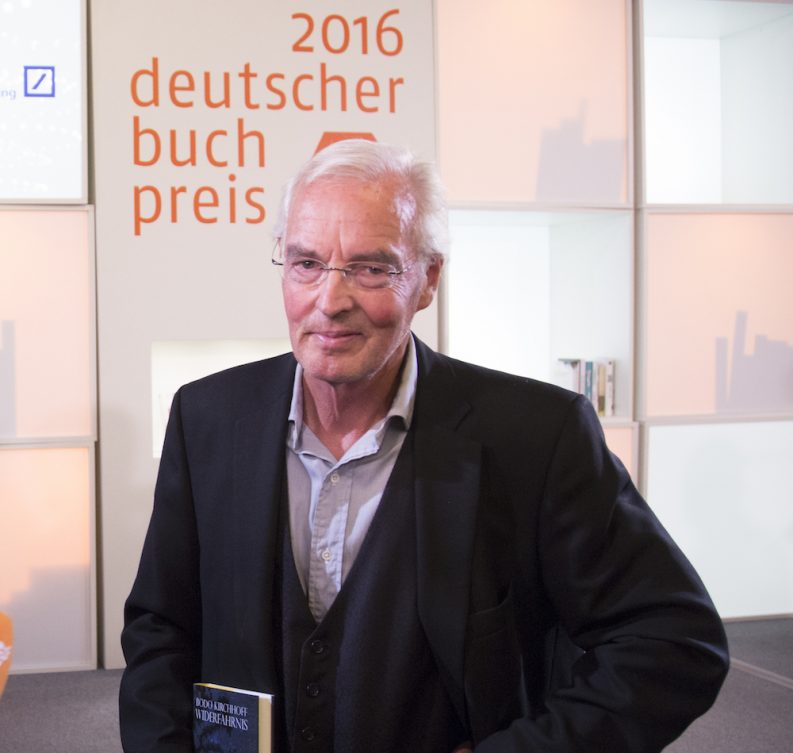 The jury has decided: Bodo Kirchhoff wins the 2016 German Book Prize for his novel ‘Encounter’ (‘Widerfahrnis’). After reading through 156 titles handed in by German, Austrian and Swiss publishers, on the lookout for the German-language novel of the year, the jury led by Christoph Schröder chose six shortlisted novels earlier this year. Tonight, October 17, Bodo Kirchhoff and his novel Encounter were chosen as the winner of the 2016 German Book Prize. Kirchhoff not only wins a purse of 25,000 euros, but is now also among the ranks of previous German Book Prize winners such as Arno Geiger, Melinda Nadj Abonji or Lutz Seiler.

The German Book Prize is awarded annually by the German Publishers and Booksellers Association (Börsenverein des Deutschen Buchhandels) with the goal of honoring German-language literature and bringing international attention to authors writing in German. The prize ceremony marks the first event of the Frankfurt Book Fair, which this year takes place October 19-23, 2016.

“Until recently, Reither ran a small publishing company in the big city, now he lives a solitary life on the edge of the Alps. Here, in his residential complex, he stumbles across a book without a title, its cover showing nothing but the name of a woman. In the evening, his pondering over the mysterious book is interrupted by the sound of the doorbell. Even though he wants nothing but peace and quiet, he opens the door and right there and then, the encounter which will take him to Sicily within three days, begins. The hand that takes him there is Leonie Palm’s. Leonie used to own a hat shop. But now that the world lacks faces that look good with hats on and writers have come to outnumber readers, they both had good reasons to quit. Yet, an even stronger bond between the two is provided by the fact that neither of them is prepared for true love anymore. Upon arrival on the Mediterranean, after three full days in the car, this love does hit them and they are joined by a girl who does not speak a single word. She is just there…”

Statement from the Jury

“Bodo Kirchhoff writes about the unprecedented journey of two people without a destination and with nothing but a direction – the South. They are driven by the age-old longing for love, for red wine, Italy, an adventure later in life. When they pick up a young vagabond along the way, they find themselves once again confronting the elementary themes of their past: loss, parenthood, radical new beginnings.

“In a densely woven narrative, Kirchhoff succeeds in negotiating the great motifs of his literary oeuvre in a small space. At the same time, he writes about our present and about how two melancholy seekers of good fortune encounter the people who, in this day and age, are setting out in the opposite direction, from South to North. Kirchhoff’s Widerfahrnis (Encounter) is a many-layered text that masterfully interweaves private and political existential questions and releases the reader out into the open.”

Bodo Kirchhoff in the German Press

Bodo Kirchhoff, who lives both in Germany and Italy, has already published two more books with the Frankfurter Verlagsanstalt (Desire and Melancholy in 2014 and Love in Broad Strokes in 2012). Both titles were highly praised by the press and readers alike. German newspaper Frankfurter Allgemeine Sonntagszeitung writes that Kirchhoff “has reached the peak of his art.” Die Literarische Welt announces that “One is swept along by the narrative art of Bodo Kirchhoff that is unparalleled in contemporary German literature.”

For further information about this title or rights inquiries, contact Nadya Hartmann at the Frankfurter Verlagsantalt.