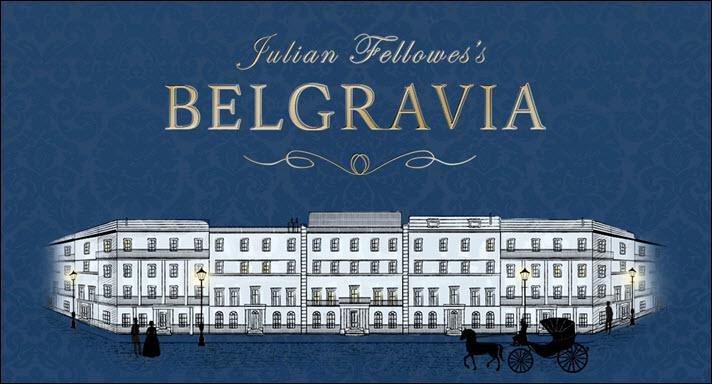 As innovative as publishers may want to be, how do we evaluate market response to ‘Julian Fellowes’s Belgravia’ with so few apps as apt comparisons? In April at London Book Fair, Julian Fellowes’ new ‘Belgravia’ app drew rightful publishing-innovation buzz for Hachette UK’s Orion Publishing Group. It sounded like the hair of the ‘Downton Abbey’ dog for the costume-drama faithful. But ‘Belgravia’ didn’t catch fire as some thought it would. And after Orion’s digital director Marissa Hussey wrote a compelling commentary for The Bookseller in June, we wanted to know how she sees it now in the context of more time since launch. Today, Hussey discusses the difficulty of gauging success in new efforts of this kind ‘with no baseline to be compared against.’ Are we comparing apps to oranges?— Porter Anderson

‘You Don’t Get To Finish’ While Downton Abbey turned its creator Julian Fellowes into a household name, his Julian Fellowes’s Belgravia has found less traction under the chandelier.

Opening at a ball in 1815 on the eve of the Battle of Waterloo, the work’s story of life and love among the opulent was serialized by Orion in 11 weekly episodes delivered to iOS and Android devices, and to its Web site. Orion published an omnibus edition in hardback and audiobook a few weeks after the final digital episode launched. The paperback is expected in November.

Publishing Perspectives has spoken with Marissa Hussey, digital development and technical director at Orion to discuss some of the criticisms of the project, the challenges of putting it together.

Publishing Perspectives: Many of your critics seemed to be confused as to what Belgravia is. Is it an app? A book in serial form? A TV program written by a team of writers? A podcast? Marissa Hussey: Belgravia is a serialized novel. We consciously aimed to mimic television in many ways because it’s a format our fans are used to–in everything from Julian as creator, with co-writers Lindy Woodhead and Imogen Edwards-Jones who have written for TV and written things adapted into TV, to the weekly release format; to cliff-hanger endings on each episode; to acclaimed actor Juliet Stevenson narrating the audiobook.

Of course there’s a desire to compare everything to Serial [a highly produced US podcast series from the creators of This American Life and Chicago’s WBEZ] because its success was a surprise.

PP: You’ve described the project as being ambitious and hugely complicated. Why was that?

MH: The simple answer is that imagining up a new product—that’s reliant on creating new technical systems; that’s establishing new revenue streams; that’s crossing international borders (we worked closely with our US colleagues); and that’s asking for skills and action not previously required—is going to be hugely complicated.

This was a whole host of firsts for Orion; second or thirds in the best cases.

I think people who didn’t have a death wish probably would have found a way to launch a minimum viable product before launch, and maybe not tried to tie a digital application to a traditional publishing date. But it was always our goal to make this a publishing project that incorporated the traditional with the non-traditional.

PP: You didn’t just use off the shelf software–you built your own as well. Why was that?

MH: We did, of course, make use of lots of off-the-shelf technology and tools–Wordpress, Kentico, SecureTrading, PayPal, and the like. But in terms of the e-commerce structure and delivery method, it was important to us to build the exact product we did and not compromise on features, and to build a framework that allowed us to wholly own what was built so it could be reused again in the future.

By selling direct to our readers we’re able to gain a lot more data than we’ve been able to before. We were lucky to find one development partner who shared our vision for the independence of infrastructure–Jen Wilson, Rebecca Winch, and Annette Parry at The Project Factory. PP: A lot of criticism has focused on how successful Belgravia has been as an app. Why in general do you think publishers are so reluctant to release any figures about sales of their digital publications?

“The industry has very comfortable measures of success for physical books that have been refined over hundreds of years.”Marissa Hussey

I don’t know what changes that, other than lots of people producing things like this, getting more comfortable with it. And time.

PP: You know this comes across to journalists as publishers have something to hide?

MH: Of course this is how it comes across. The industry has very comfortable measures of success for physical books that have been refined over hundreds of years.

We are all doing things very different from each other with no baseline to be compared against.

PP: Reading what you’ve said in the last few months about Belgravia, it’s hard for an outsider to judge how successful it actually has been. Many critics have zeroed in on how few followers it has on Twitter – 916 at this writing. So has Belgravia been successful? And, if so, how are you measuring that?

MH: I personally think it is a success, with 25,000 fans wanting Season 2. The company sees it as a success. We will judge it on profitability.

MH: Twitter is important for the publishing industry, but it’s shortsighted to pick it out on its own and not look at the whole marketing strategy. It was never the focus of our marketing for Belgravia. Facebook and email were obvious successes.

Our market [is made up of] fans of historical fiction who we know are Facebook users. Before the final episode was released they were chatting with each other and posting, which is what we wanted.

PP: Critics have also zeroed in on your fairly conservative pricing structure for an experimental project. Why didn’t you go for more radical models, such as a more Netflix-binge approach, or a tiered approach?

“This a live thing. There isn’t really an end of season. We’re a couple of weeks from the launch of the paperback and the app is still very much live.”Marissa Hussey

MH: This critique is imparting an inflexibility that the product simply doesn’t have. Our technology was built to support any pricing structure or release method that is appropriate. The £9.99 [US$12.97] weekly pricing and delivery strategy was what we decided to do this time around, but it’s a sales and marketing detail more than anything.

We did research before launch with real consumers, and data analysis afterward, and based on that, I do believe it was the right decision. The app was free and had the first episode in it, and then, when you purchased, you got the text, plus the audio, plus tons of other free stuff for less than a tenner, which we only heard positive consumer feedback on. Critics can say what they like, but making the consumer happy is our goal.

The expectations we actually fell short on for consumers were when we were compared to much more established apps and products that have been on the market for many years—and they felt our features weren’t as sophisticated. Which was fair, and true in most cases. PP: Was the intention to drive sales to the book?

MH: The intention was to drive sales to the story, the Duchess of Richmond’s ball that kicks it all off, the Victorian era, and Julian’s skilled storytelling. Our goal was to create a community around the story, knowing people would be able to experience it whichever way they chose to.

PP: Is there any evidence that the app cannibalized sales of the book?

MH: Is “I wish!” an acceptable answer? There were lots of people who were never going to try the app or Web site, which we went into with eyes open. Some people purchased both, as they were keen on the experiment and wanted to experience the bonus features, but they’re also book collectors and wanted the beautiful hardback edition on their shelf.

MH: This a live thing. There isn’t really an end of season. We’re a couple of weeks from the launch of the paperback and the app is still very much live. It’s not something that goes away. You don’t get to finish.