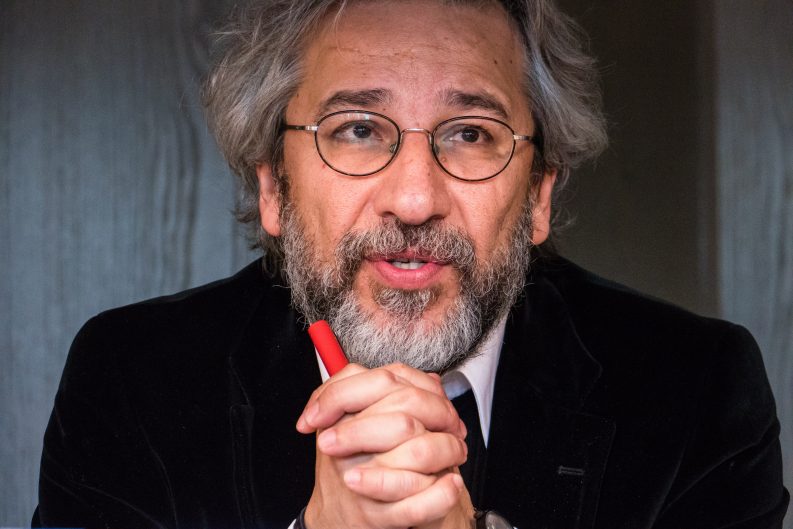 The issue of censorship was at the heart of the press conference held early Wednesday morning (October 19), with Fair director Jürgen Boos introducing Can Dündar, former editor-in-chief of the Turkish daily Cumhuriyet.

Dündar was arrested in 2015, along with the paper’s Ankara bureau chief, following a report on an arms shipment to Syrian extremists by the Turkish secret services. Turkish President Erdogan personally pressed charges and demanded life sentences for the journalists.

Dündar spent three months in prison in solitary confinement before his temporary release, subsequent trial, and his exile to Europe. While in prison, he wrote the book he is presenting at the Fair this year, Lebenslang für die Wahrheit (A Lifetime for the Truth) published in Germany by Hoffmann und Campe. The Turkish edition was published by Can Yayinlari. The English edition recently came out from Biteback Publishing under the title We Are Arrested.

“We didn’t come here to promote our books or ourselves but to give voice to the world about our colleagues in prison and others,” said Dündar at the briefing. “Journalists, writers, academics—thousands of people—are under arrest in Turkey and the rest of the country is afraid of saying something for fear of oppression.

“We need courageous voices to tell what’s going on…Unfortunately, we’re not just losing a profession and freedom, but we’re losing a country, a country that was the only and the first to be secular in the Islamic world.”

What can Europeans do? Dündar was asked.

“Stand by us,” he replied. “Stand by the courageous journalists under difficult conditions fighting for truth; to European colleagues, please bear in mind that you have colleagues who are fighting for freedom of expression and journalism.”

While he said he understood realpolitik and the need for Western governments to collaborate with the Turkish government—whether in dealing with the refugee crisis, fighting ISIS, or confronting other interests in the region—Dündar stressed that Western governments should remember that they are negotiating with a government opposed to freedom of expression.

“We should decide if we need a world with people like Trump, Erdogan, or Putin or whether we should fight for another world. I don’t want [the first kind] of world, so I will fight for our freedom.”

You can’t stop people from communicating among each other, said Dündar. “When I was in solitary confinement, we shouted through the pipes to each other…”

Dündar confirmed that he is collecting colleagues “under one umbrella” to create a media outlet or web TV in exile in order to communicate with a Turkish audience.

And he has not been wasting his time in Frankfurt. He was one of the first guests to arrive at his agent Nermin Mollaoğu’s 10th anniversary party for her Istanbul-based Kalem Agency, and one of the last to depart. He also made a declaration and called for the release of imprisoned Turkish author Asli Erdogan at an event Tuesday evening (October 18) organized by Jürgen Boos and Erdogan’s literary agent, Pierre Astier.

This year, Germany is the guest of honor at the November book fair in Istanbul. Fair director Jürgen Boos says freedom of expression will be discussed.