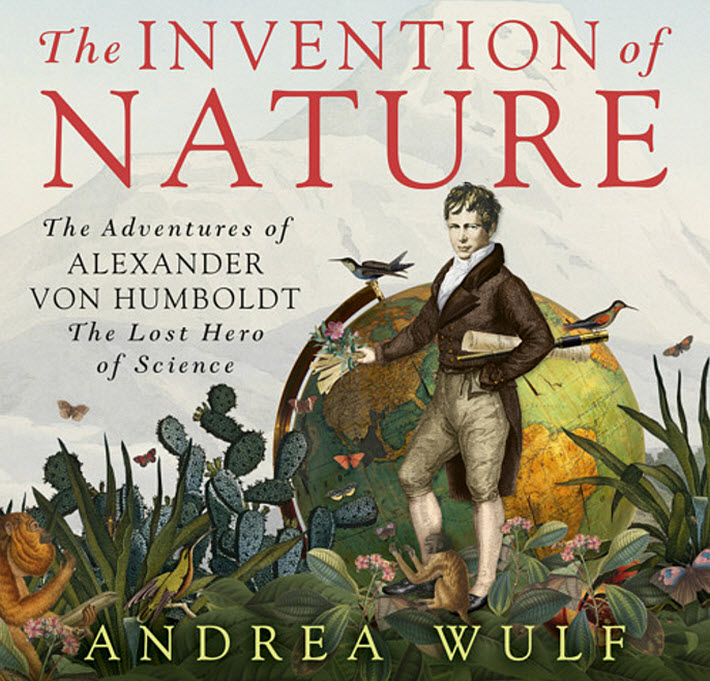 The notion that ‘a biographical approach is somehow a peculiarly female pursuit’ dogs the conversation around Andrea Wulf’s ‘The Invention of Nature.’ The audiobook treatment of the UK cover of Andrea Wulf’s ‘The Invention of Nuture,’ first published by John Murray

Amid rising calls for diversity in publishing—and for more even-handed recognition of excellence—many awards programs today come under scrutiny for issues of fairness, inclusion, balance. Here’s an interesting case of pushback that has followed author Andrea Wulf’s honor from the Royal Society. Born in India and raised in Germany, Wulf lives and works in London.— Porter Anderson

On a ‘Modern Conception of Nature’ Andrea Wulf’s The Invention of Nature: Alexander von Humboldt’s New World (John Murray, UK, 2015) has been one of the most widely honored science books of the past few years. Some of its accolades:

Thomas Levenson at The Atlantic in The Sexist Response to a Science Book Prize, points out that the question is not as innocently optimistic as it may sound.

Levenson writes that Dugdale has proposed that”the Royal Society caved to pressure created by the example of another ‘more female-friendly’ prize. His piece suggests that the judges’ taste is shifting from ‘male’ approaches to science writing that emphasize ‘a problem, a mystery, or an underexplored scientific field,’ [and] toward a feminine tendency ‘to focus on people.'” But Levenson—who was also on the prize’s shortlist for his own book, The Hunt for Vulcan…and How Albert Einstein Destroyed a Planet, Discovered a Planet, and Deciphered a Universe (Penguin Random House, 2016)—has this to say about the competing titles:

“The list included two ‘big’ books of the sort often rewarded by prizes, Wulf’s and Siddhartha Mukherjee’s The Gene. Just as formidable, there was a daring investigation of a pressing current concern in Oliver Morton’s The Planet Remade, along with Tim Birkhead’s learned and lovely book on birds’ eggs in The Most Perfect Thing, and Jo Marchant’s beautifully written and courageously pursued account of mind-body medicine, The Cure.

“Dugdale paints a very different picture of the field. He describes Wulf’s book as a kind of soft option, just a single-subject biography, the first to win the Royal Society prize for almost two decades. That’s both wrong and obtuse in its stereotyping as female what is one of the most basic tools almost every non-fiction writer uses.”

Levenson adds that while Wulf’s The Invention of Nature is largely a biography of Alexander von Humboldt (the Prussian naturalist, 1769-1859), it’s also an extended account of the ideas that he championed, concepts that, as Wulf argues, grew into the “modern conception of nature as an interrelated whole.” More from Levenson: “That Dugdale thinks a biographical approach is somehow a peculiarly female pursuit is simply risible, or so it seems to this male author of Einstein in Berlin and Newton and the Counterfeiter.”

Dugdale, in his argument that men write about unexplored fields of science while women write books that focus on the human, concludes his piece, writing: “The idea of such a split shouldn’t be pushed too far – neither Andrew Solomon’s 2014 Wellcome winner Far from the Tree nor Steve Silberman’s 2015 Samuel Johnson winner NeuroTribes could be accused of shunning the human–but it certainly held true at this year’s Royal Society ceremony.

“The men on the shortlist introduced books about geo-engineering, eggs, the hunt for a non-existent planet, and the history of genes. In contrast, Wulf enthused about her globetrotting genius and Jo Marchant read a passage from her exploration of mind-over-body healing, Cure – the only extract that reached for the messy subjectivity of the first person.”

Levenson, in his own conclusion: “But if doing well is the best revenge, then Andrea Wulf can hold her head high: As the judges noted, The Invention of Nature was their unanimous selection as the best popular-science book of the year.

“As her colleague and competitor, I raise my glass in salute.”