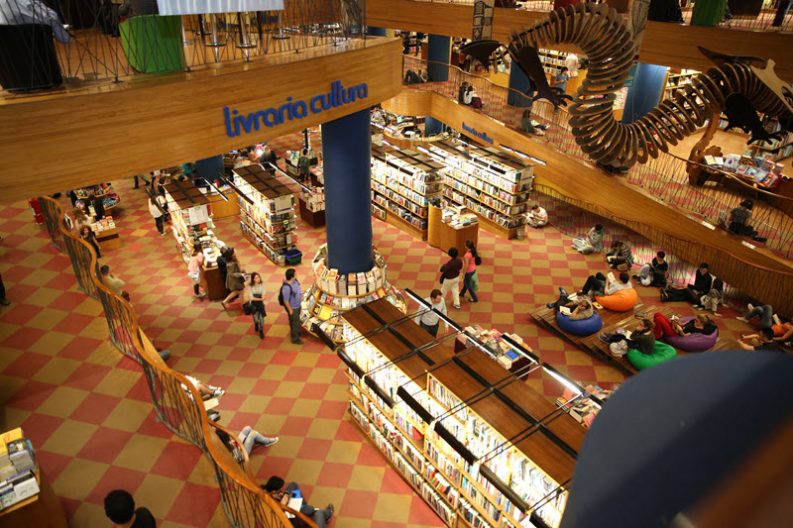 Ahead of the October 18 conference The Markets: Global Publishing Summit produced by Frankfurt Book Fair and Publishing Perspectives, two of the event’s seven featured regions, Brazil and the United Arab Emirates, have begun exploring cultural ties and trade opportunities. The potential here, the UAE’s Sheikha Bodour bint Sultan Al Qasimi says, is what she terms a “mission possible,” a new context for mutual support in the two countries’ specific book-industry needs.

In describing the nascent bilateral effort, Bodour points to bookselling and the way the Herz family’s departure from Germany has led to the creation of Livraria Cultura, a prominent bookstore chain in Brazil.

“Pedro Herz’s parents had fled persecution in Germany,” the founder of the UAE’s Kalimat Group and Emirates Publishers Association (EPA) tells Publishing Perspectives. “And they moved to Brazil, which became their home. His parents faced financial challenges as they settled, but that didn’t stop his mother from spreading her love for reading by lending books to her neighbors.”

“It’s easy to see how passionate Brazilians are about their culture. And if that passion can be shared with the world through the literature, it can help the country move forward, even in the face of adversity.”Bodour Al Qasimi

Bodour led a trade visit to Brazil last month, arranging for meetings for Herz and herself and for several colleagues interested in cultivating new trade ties between the UAE and Brazil and other parts of Latin America. She was impressed, she tells us, by the story Herz told the delegation of his mother’s fondness for sharing books.

“She brought with her only 10 books, which she started lending for free,” Bodour says. “The waiting list to borrow her books grew longer and longer. People sometimes had to wait two years to borrow some of her books. The enthusiasm for her idea prompted her to buy more books, and soon her book-lending idea became a book-selling business.

“Today,” Bodour says, “Livraria Cultura reflects a rising trend: one recent survey shows that around 56 percent of the population of Brazil, or 104.7 million people, engage in reading, an increase from the 50 percent recorded in 2011,” the last census report.

But Brazil’s publishing industry remains susceptible to domestic, economic and political instability, she says, much as in the Middle East. The group’s meetings, says Bodour, who is also an executive committee member of the International Publishers Association, indicated to her that Brazil has both a chance and a need “to diversify its book industry and create trading partnerships that would open up global opportunities”—reflecting the UAE’s needs of the same kind.

Having heard from several members of the UAE trade delegation earlier, Publishing Perspectives asked Bodour for her own thoughts on the significance of the trip’s interactions with Brazilian colleagues.

“Our visit was special,” Bodour says, “because it coincided with Brazil hosting the Rio Olympics, and we met with locals who were in high spirits, proud of what they’d pulled off. It’s easy to see how passionate Brazilians are about their culture. And if that passion can be shared with the world through the literature, it can help the country move forward, even in the face of adversity.” Bodour cites a recent study conducted by the Institute for Economic Research for the Brazilian Book Chamber (CBL) and the National Union of Book Publishers showing that the total turnover of Brazilian publishers in 2015 was approximately $1.5 billion.

“Brazil’s ongoing economic and political crisis have had a significant effect on consumer and government book purchases,” she says, “showing a loss of almost 30 per cent in value since 2013.

“This calls into question Brazil’s book industry growth and the need to emphasize the importance of trade partner diversification.

“As a publisher,” she says, “I believe one of the best ways to turn the tide against the impact of Brazil’s economic and political crises on publishing is diversification in trade. Expanded partnerships can reduce the effects of exchange-rate risks and inflation.

“This gives other countries a platform to use in exploring market opportunities,” while focusing on opportunities, in this case, for Arab publishers in Brazil and Latin America.

“In fact, the National Library Foundation offers stipends to local authors and foreign translators of Brazilian works. It would be amazing if this was replicated by other countries.” “Our meeting with CBL opened up new collaboration between the Arab world and Latin America; a significant step for Brazil’s book industry as it tries to establish itself a truly global player in the books industry.

“During our meeting with the CBL,” she says, “we talked about the current publishing trade relationship between Latin America and the Arab world; explored potential programs to expand inter-regional trade with Brazilian publishers; and identified potential areas of support that Sharjah Publishing City can offer Brazilian publishers, especially in print-on-demand and metadata services.

“This emerging partnership is important for both sides, and CBL, EPA, and the Sharjah Book Authority want to work together to develop the Brazilian book market in the Arab world, and to promote Arab books in Brazil,” in light of huge interest from one of the largest Arab-diaspora populations in the world.

Also ahead, she says, is new engagement by Brazilian publishers in the Sharjah and Abu Dhabi international book fairs, echoed by heightened activity among Arab publishers in São Paulo’s and Rio’s fairs.

“In our meetings with leading publishers and authors,” Bodour says, “we identified several rights and distribution deals” that have the potential to fast-track translation agreements.

“These deals, while still in preliminary stages,” she says, can help “Brazilian publishers access the 22 countries of the Arab world with a population of about 450 million,” while helping Arab publishers leverage Latin America’s Arab readership.

“Whether it’s the members of CBL or authors and publishers keen to share their vision and culture with the rest of the world—or even bookstore owners like the Herz family of Livraria Cultura–the Brazilian publishing industry can handle its current struggles,” Bodour says.

“The trade partnerships Brazil has developed with the Arab world” through such efforts as August’s interaction with the Emirates Publishers Association “may be just one step in the right direction for Brazilian books industry, but it’s a beginning.

“With time,” Bodour says, “similar partnerships and efforts will open the Brazilian world of literature and give the world an understanding of the rich diversity and culture of that beautiful country.” Bodour Al Qasimi is one of the speakers in The Markets: Global Publishing Summit (18 October 2016) from Publishing Perspectives and the Frankfurt Book Fair. Our free white Markets white paper is available, and you can read our series of interviews and information in relation to the conference, as well.