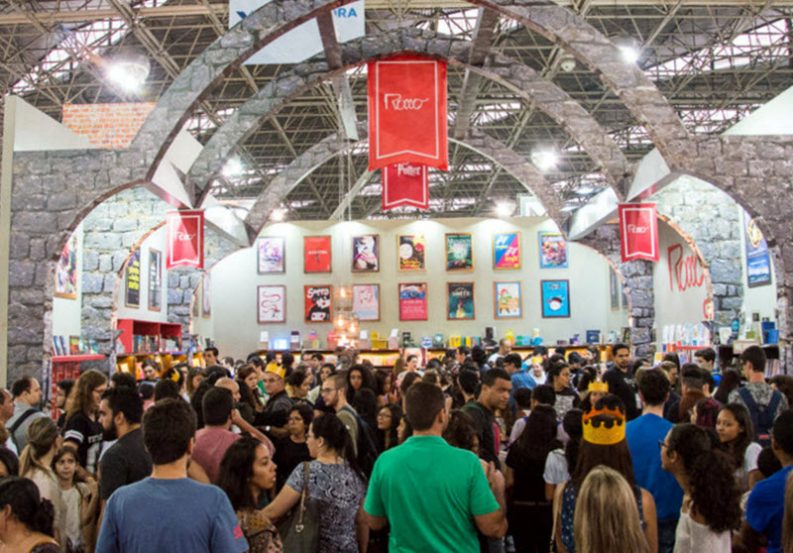 When Publishing Perspectives spoke earlier this summer with the United Arab Emirates’ Sheikha Bodour bint Sultan Al Qasimi about the trade delegation she was leading to the São Paulo Biennial Book Fair, the founding publisher of the Kalimat Group explained the rationale for cooperation between trade publishers of the Arab world and Latin American markets. “Latin America has the largest population of people of Arab descent outside the Arab world,” Bodour told us.

“Although precise statistics aren’t available, estimates of the size of the Arab diaspora in Latin America range from 17 to 30 million people, ranging from some 1,400 people in French Guyana to as many as 12 million in Brazil. Estimates are that in Brazil alone, there are more people of Lebanese descent than in Lebanon itself.”

Latin American publishers, Bodour said, have had less success in efforts to enter the Arab markets than some Arab publishers have had in accessing Latin markets. It’s her observation that, in fact, this might be addressed if Latin American content providers looked at delivering sectors of content that the Arab world so far has lagged on—”more diverse genre coverage” is needed, for example.

“The Arab region is one of the most connected parts of the world,” Bodour told us, “and our youthful, technology-embracing, digitally-empowered population offers a big opportunity for Latin American publishers to provide Arabic digital content—ebooks, apps, video, audio, infotainment, gaming, and e-learning.”

The trip, then, to São Paulo’s book fair last month, was exploratory. While rights transactions weren’t made this time, Bodour and her group of fellow Arab publishing specialists say they were successful in opening a new and significant dialogue with their colleagues in Brazil and neighboring countries. We’ll soon have Bodour’s overview of what was learned and accomplished in this trade mission.

Today, we have comments from three members of the delegation.

Rawan Dabbas: ‘The Demand for Arabic Content in Brazil’ Rawan Dabbas is the international relations chief for the Emirates Publishers Association, and handled much of the programming for the delegation’s trip.

“Brazil is so diverse,” Dabbas tells Publishing Perspectives, “with people from Japan, Italy and even Lebanon contributing to a significant number of its population.

“This diversity means that the book culture is extremely rich, and this is well reflected in children’s books and cookbooks, two popular categories in the Brazilian book market.

“During our visit, we found that the UAE and Brazil share very similar demographics. Many in both countries’ population are aged under 30. We also found that the demand for Arabic content in Brazil is high, as is the demand for Portuguese content in the Arab world. Furthermore, the Brazilian book market offers a wide range of diverse book genres, something that the UAE youth are craving.

“We’re happy to have identified a number of publishers to invite to Sharjah International Book Fair to explore right deals based on the unexpected similarities that we found between the two countries.”

The Arab team is still researching its best approach, and to that end has distributed a survey while in São Paulo.

“We want to learn more about what Brazilian publishers are interested in,” Dabbas says, “so we can bring more UAE publishers on our next visit.”

The next stop, Dabbas says, is Frankfurt Book Fair. “There, we’ll be meeting with many publishers including our colleagues from Brazil. Hopefully, we’ll attend the next São Paulo or Rio book fair, and we’re excited to have a booth in São Paulo 2018.”

Tamer Said: ‘A Real-Life Sense of the Market’ Tamer Said works with Bodour as managing director to the Kalimat Group. He says the São Paulo mission was informative, especially for being on-site.

“After meeting with a number of Brazilian publishers during our visit,” he says, “it was obvious that Brazil and the UAE face very similar challenges in the publishing industry.  We learned more about the Brazilian book market and got a real-life sense of the market when we met the local players.

“We were shocked to find out how large the Arab diaspora in Brazil is. Brazilian publishers are very interested in quality Arabic content because of this significantly large Arab diaspora.

“There’s huge potential,” Said says, ” for future trade with Brazil and Latin America as a whole in many different areas.”

Salim Omar: ‘To Strengthen Our Resolve’ Launched in 2011 at the 30th annual staging of the book fair, the $300,000 grant is designed to “fund the translation, publication and distribution of quality titles from all genres from other languages into Arabic and from Arabic into other languages,” according to its charter, “thus creating cultural bridges with Arab world societies, investing in translation as a profession and encourage more and better quality translators.”

The grant, Omar tells us, “was a popular topic of inquiry at the São Paulo fair,” although the size of the Arab population in diaspora had prepared them for the high number of inquiries they had about it.

“With more than 85 books approved for translation from 2015,” Omar says, “this grant’s impact on the global publishing industry and its facilitation of the translation of books from and into Arabic is indelible. The response we received encourages us to strengthen our resolve to fortify Arabic language publishing in the years to come.”

Bodour Al Qasimi is one of the speakers in The Markets: Global Publishing Summit (18 October 2016) from Publishing Perspectives and the Frankfurt Book Fair. Our free white Markets white paper is available, and you can read our series of interviews and information in relation to the conference, as well.