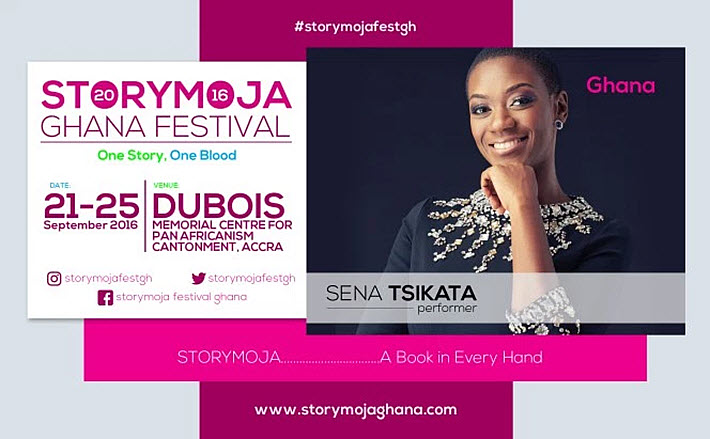 After almost 10 years in its original Kenyan setting, Muthoni Garland’s Storymoja Festival opens as an event in Accra, Ghana, newly relocated and pan-African in outlook. As Kari Mutu, reporting for The EastAfrican writes—in a version reposted at allAFrica— The Storymoja Festival, an annual literary and arts celebration, has become a pan-African event.

Traditionally held in Nairobi, the event becomes the inaugural Storymoja Ghana festival this year, scheduled to open today (September 21) at the Du Bois Memorial Center in Accra. It runs through Sunday (September 25).

“The move marks a bittersweet moment for Nairobi,” writes Mutu, “as the festival has now been put on hold in the city indefinitely.”

The Nairobi fair had been considered a key showcase for books and for art in general. And, since Storymoja is a Kenyan publishing house, the fair had been an essential part of the publisher’s business strategy in promoting a national reading culture.

The festival, which Garland tells Mutu, “brings together local and international authors, artists, bloggers, musicians and opinion leaders to exchange thoughts on writing and culture,” has served as an important stage on which to promote and celebrate authors.

Garland says the idea for the festival began when she attended the flagship Hay Festival at Hay-on-Wye nine years ago, and was astonished to find that 150,000 people would travel long distances to attend a book event held in “a temporary tent-city on a sheep farm in Wales.”

She decided to start a similar event back home in Kenya.

Storymoja partnered with the Hay Festival in 2007 to host its first “literary jamboree” in Nairobi. And since then, the fair has featured major literary talent including Ben Okri, Michela Wrong, Vikram Seth, and Wole Soyinka. Mutu writes, “Auma Obama, the patron of the Storymoja Festival, had a vision of the fête becoming an African event. So when Kofi Awoonor, producer and director of Storymoja Ghana, approached Garland to host a similar event this year, the dream of becoming pan-African came to life.

“‘His impetus came from wanting to mark the second anniversary of his father’s death,’ says Garland.

“Afesti Awoonor is the son of the late Ghanaian writer and poet Kofi Awoonor, who was killed in Nairobi during the Westgate Mall terror attack of September 2013. Kofi had been slated as a key speaker at the Nairobi festival that year.”

Storymoja Ghana will continue the festival’s traditions of storytelling, dance performances, and poetry, along with book discussions with noted guest writers.

“The activities will be structured so that students and younger audiences are able to participate,” says Maame Adwoa Marfo, the festival’s media and communication manager, to Mutu. Last year’s festival in Nairobi saw some 6,000 visitors, but young people and school children, who made up more than half of that number, had subsidized tickets.  Mutu writes that “ticket sales cannot sustain an international-standard festival that includes costs for hosting invited guests and hiring a venue.”

Garland adds, “It would take corporate support, especially advertising, for us to attract at least 20,000 festival goers.”

And, while acknowledging that other book festivals draw huge crowds (250,000 at Hay, over a million at Jaipur, over two million at Edinburgh), he says, “These festivals have grown over many years of local support from their governments and corporate sectors.”

And while festival organizers argue that they have the “experience, contacts, tools, and passion to put on a fair that attracts local and international writers,” Garland says, “we can only deliver if funding is secured early enough, preferably over several years.”