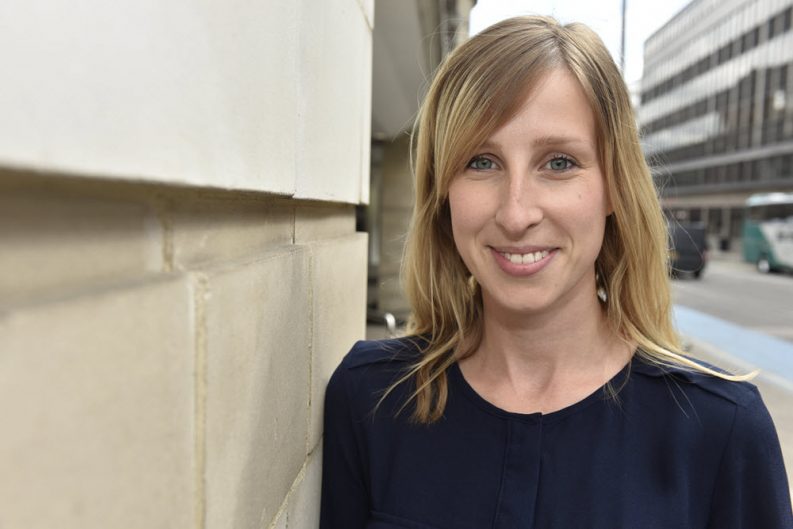 The Rising Stars program is a project conceived and run by The Bookseller in association with Frankfurt Book Fair. It recognizes emerging leadership in the UK publishing industry. Publishing Perspectives’ series of interviews with members of the class of 2016 continues today with Emma Smith, the program’s “Shooting Star,” top of the class. As such, she’s a guest of the Book Fair and you can hear her speak at the Business Club in our Newcomers On Stage series at 4:30 p.m. October 20.—Porter Anderson

‘I Care Fiercely About the Books I Commission’

Best known for her work on fun, quirky, and–importantly–successful titles like Dogs in the Air, Orion’s Emma Smith is this year’s Bookseller Shooting Star, deemed to be the most strikingly ascendant of the year’s forty Rising Stars.

After taking an MA in Publishing at London’s City University, Smith interned at Bloomsbury and Random House before joining first Mills & Boon and then Hachette UK’s Orion as an editorial assistant. Now an editor at Trapeze–Orion’s coming imprint described here by The Bookseller’s Katherine Cowdrey–Smith is part of a three-woman team with two previously risen stars, Anna Valentine (Rising Star 2011) and Sam Eades (Rising Star 2013).

With forthcoming titles from Trapeze including the latest volume of Alan Partridge’s autobiography and a biography of Guns ‘n’ Roses from music industry stalwart Mick Wall, the next twelve months look set to continue Smith’s upwards trajectory.

Countdown to launch! As part of #TrapezeNewVoices week we are teaming up with @hachettecareers to take you behind the scenes in #publishing

Publishing Perspectives: When did you get into publishing and what brought you to the book industry for a career?

Emma Smith: I’ve been working in publishing since 2012. Post-university, I researched the industry a lot, read up, lurked on Twitter looking at the feeds of various editors and realized that this was my scene.

I love books and business, so publishing is a great mix for me, combining the creative and the commercial. I was lucky enough to be given a bursary by The Stationers Foundation to do an MA in publishing, where I made the most of making industry connections.

“Someone said ‘The problem with publishing is that there are too many white middle-class girls called Emma.’ And here I am.”Emma Smith

ES: I really hope my best efforts are yet to come. I’ve loved working on some of the gift humor titles, which have sold well—but I don’t want to be defined forever by Dogs in the Air, no matter how cute it is.

I think some of my best efforts have been the quick turnaround projects. I’ve worked on books that have gone from idea to print in six weeks flat. In fact, I’m currently working on one like that now–never stops.

ES: I’m ambitious and I care fiercely about the books I commission. However, publishing is a huge collaborative effort and I’ve learned that the best books work when everyone is on board. So my strength as an editor is actually wrapped up with strength in numbers at Trapeze, and in Orion as a wider company.

‘I’m Part of a Broader Problem in the Industry’

ES: When I was trying to get into publishing, one top industry professional said: “The problem with publishing is that there are too many white middle-class girls called Emma.” And here I am. I’m highly aware of the fact that I’m part of a broader problem in the industry. Plus, to add insult to injury, I have a boring name.

PP: Where do you want your career to be in five years?

“We need to be responsive–not just to trends, but to how readers want to engage with books, how we need to be looking for books from new sources, and how we can adapt to the changing market.“Emma Smith

ES: I’d like to have a lot of bestsellers under my belt. I hope I’ll bring some interesting and standout projects forward and I’d also like to see Trapeze flourish as an imprint. We’re only a small team but we’re putting a lot of effort in and we’re expecting good results.

ES: From my point of view, it’s being agile. We need to be responsive–not just to trends, but to how readers want to engage with books, how we need to be looking for books from new sources, and how we can adapt to the changing market.

PP: You’ve been described by a colleague in The Bookseller as “a pop culture powerhouse with her finger on the pulse and an innate ability to spot trends.” How do you do it?

ES: I still haven’t found out who said that. Without giving away all my secrets, it’s a combination of things.

We obviously have consumer insight resources and data available to us, but it’s also about keeping your ear to the ground–talking to people, watching what sells, reading, engaging with what’s in the news, keeping up with social media…having a life!

Trapeze is trying to become more open as an imprint. We have drop-in editorial meetings and anyone can come forward with ideas. Great ideas can evolve through a group of people and we’re trying to attune ourselves to that mentality, as well as sometimes relying on pure gut instinct.