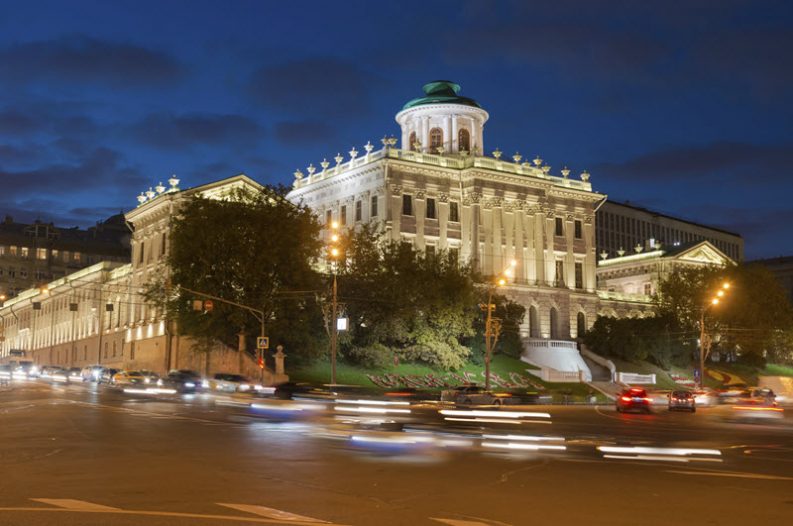 Translations into Italian, Spanish, and English are among the new winners of the biennial awards, given in Moscow both to translators and to publishers. Ceremony Set at a Translators’ Congress

As Alexandra Guzeva reports for Russia Behind the Headlines, “The Read Russia Prize is awarded once every two years to a translator or a group of translators and to a publishing house for the best translation of Russian literature published within the last two years. In addition to a diploma and medallion, winners also receive a cash prize.

“This year’s award ceremony was the central event of the fourth International Congress of Translators of Fine Literature, which took place at the Russian State Library on Sept. 8 to 11.”

Awards were presented in several categories.

In the category of  classic literature of the 19th century, Spanish translator Joaquin Fernandez-Valdés and Barcelona’s Alba publishing house took the price for Fernandez-Valdés’ translation of Turgenev’s Fathers and Sons.

The award was presented by Natalia Solzhenitsyna, widow of Nobel Prize-winning author Alexander Solzhenitsyn and member of the board of trustees for the Read Russia prize. In her speech, she said, ‘Translators exist so that national cultures can be understood by their neighbors,” and that it was important that the prize go to a translator into Spanish, the world’s second-most spoken language.”

A second Spanish-speaking translator, Selma Ancira, along with Mexico’s Fondo de Cultura Económica publishing house, received the prize in the category of  literature of the 20th century (pre-1990) for her translation of selected short stories by various 20th-century Russian writers, Fancy Landscape of Russian Literature.

The award was presented by the director of the All-Russian State Library for Foreign Literature, Vadim Duda, who took the opportunity to announce plans to create “a special center for Spanish language and culture” at the library.

In the category of contemporary literature (post 1990), the prize went to American translator Lisa Hayden and London’s Oneworld Publications for her translation of Eugene Vodolazkin’s novel Laurus.

Vodolazkin, commenting on the award, is quoted by Guzeva saying, “I feel a great joy and pride for Lisa, because she committed the impossible thing—she translated the novel that seemed to be non-translatable for me. She faced a problem with the ancient Russian words, but she managed with them perfectly. Her main feature was that she followed the text of the novel, very carefully listened to its pulse and followed its pace, that’s why the translation appeared to be as if the novel was written direct in English.”

Along with her work as a translator, Hayden is also a jury member of Russia’s Big Book literary prize, and writes about Russian literature in her blog, Lizok’s Bookshelf.

Marian Schwartz, whose translation of Tolstoy’s Anna Karenina won the Read Russia prize last season, tells Russia Behind the Headlines that Hayden “could not have been a better choice,” saying that “This is [an] amazing translator and the project is perfect. It’s going to be good for Russian literature to have a book that such a wide range of people can enjoy.”

Schwartz says she has high regard for Italian translator Claudia Scnaudra, who, along with Gattomerlino publishing house, received the award in the poetry category for her translation of Sergei Gandlevsky’s Rust and Yellow.

The Read Russia Prize was founded in 2011 by the Institute for Literary Translation, officially organized by the Boris Yeltsin Presidential Center. The prize receives the support of the Russian Federal Agency for Press and Mass Communications.

The organization is sponsoring a Russian Literature Week in December, as covered in Publishing Perspectives.