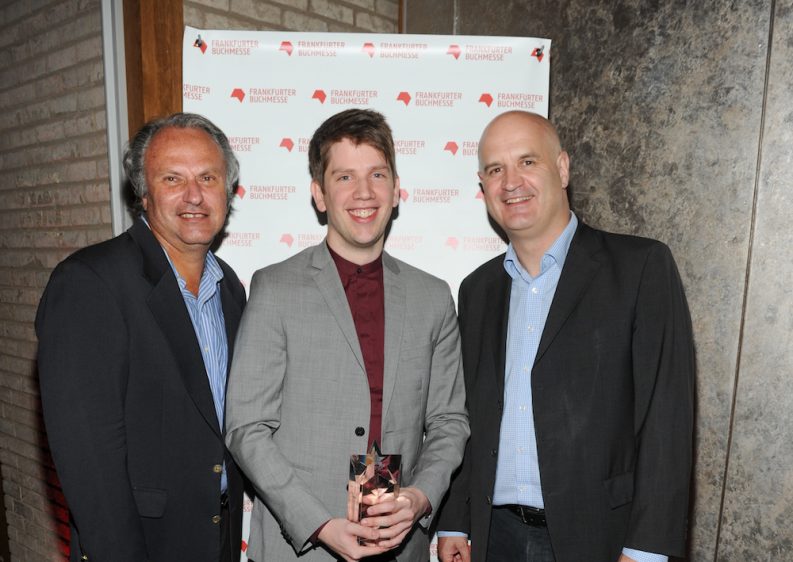 ‘I Never Wanted the Stories To End’

“‘Write what you know’ may have produced some good books, but ‘publish what you know’ is a train to nowhere.”Andrew Harwell on prioritizing diversity in publishing

HarperCollins Children’s Books’ Andrew Harwell has been named Superstar of the 2016 PW Star Watch program, and will be at Frankfurt Book Fair in October as a result. A senior editor in middle-grade and YA fiction, Harwell was named on Wednesday evening (September 15) at New York’s Dream Hotel Downtown.

Harwell tells Publishing Perspectives that his devotion to books has been with him since he was the age of many of his readers: “I used to carry books like Robinson Crusoe and Great Expectations around my elementary school playground—partly because they were worth the most accelerated reader points and partly because I just loved long books. I never wanted the stories to end.” Harwell is an author, himself. His The Spider Ring was published by Scholastic last year.

Launched in 2015 by Publishers Weekly in association with Buchmesse, the PW Star Watch program in the US in many ways parallels the UK’s Rising Stars program, conceived and run by The Bookseller to recognize emerging publishing industry talent in the UK, also in association with Frankfurt. (You can read our ongoing series of interviews with 2016 Rising Stars here.)

The stated intent of Publishers Weekly’s Star Watch is “to identify and celebrate talented emerging leaders in the US publishing community, bring recognition to them on a global stage, and provide them with additional mentoring and an expanded network. The goal of PW Star Watch is to invest in the advancement and innovation of the next generation of publishing leaders, retaining talent and rewarding creativity.”

Prior to moving to HarperCollins, Harwell was at Penguin Books for Young Readers, and graduated Phi Beta Kappa from the University of Chicago with a degree in Germanic Studies and Fundamentals: Issues and Texts. He says he’s reviewing his German ahead of the trip to Frankfurt.

In interviewing Superstar Harwell for Publishing Perspectives, we’ve learned that he did all that determined long-book reading as a kid in Newnan, Georgia, about 30 miles south of Atlanta. And it was a bookshop employee, he says, who fed his habit.

“When I described this problem” of wanting to read only long books “to my savvy local bookseller,” he says, “she pointed me to the Redwall section of the children’s corner. ‘These books never end,’ she said. That’s when I fell in love with series fantasy, but I’ve never stopped loving the classics, or the books that are so good you know they are destined to become classics.

“Susan Sontag said it best: ‘I want to read only what I’ll want to reread—the definition of a book worth reading once.'”

That’s where we pick up our exchange.

Publishing Perspectives: What makes YA and children’s where you’ve landed? You’re not out of that playground with Defoe and Dickens yet, are you? Andrew Harwell: At the University of Chicago, many of my undergraduate courses focused on “the great books,” and one of the things I loved about UChicago was that it emphasized original texts. Close readings and discussions of books like Mrs. Dalloway and The Magic Mountain certainly gave me a good basis for knowing how to edit a novel.

In my spare time, though, I found myself gravitating toward the wonderful children’s and YA section of 57th Street Books. I distinctly remember reading Francesca Lia Block’s Dangerous Angels and just being electrified by it—the language, the magic, the ease and hopefulness with which it portrayed queer love stories. That book—and many other middle-grade and YA novels I encountered there—felt alive to me in a way that made me want to be a part of making them.

When the summer after my junior year rolled around, I applied to every children’s book publishing internship I could find.

PP: How long have you now been active in the industry?

AH: It’s been eight years and three months this week. I started at Dutton Books for Young Readers—where I’d interned—the day after I graduated from college.

PP: And which of your projects has had the highest visibility? I also acquired and edited the four novels and three novellas in Madeleine Roux’s New York Times bestselling Asylum series. I’ve also worked with Dan Gutman on many of his books with HarperCollins, including books in the My Weird School series, the Genius Files, the Baseball Card Adventures, and Flashback Four.

PP: Clearly, you’re working with some terrific people—HarperCollins colleagues as well as authors. Emily St. John Mandel (Knopf, Station Eleven) said in her recent keynote at the Writers’ Digest Annual Conference that in publishing, people who are decent to work with always seem to have an edge. Is that your experience, too?

AH: Yes, I’d say I’ve had the good fortune of working with a preponderance of kind people. I do think this stems in large part from the nature of the work itself; most of us are in this business because we believe in the value and importance of good books for young people—we’re an empathetic subset of an already empathetic demographic: readers.

This isn’t to suggest that the job is all smiles and pretty pictures—any field that mixes art and commerce has by definition creative disagreements with real financial stakes. But I think the other secret of children’s publishing is that a lot of the books are fun. From the original art we get to commission to the editorial notes we get to enjoy out of context (“Can the bear wear pants, please?”), we have a lot to keep us laughing through the hard parts. PP: In terms of children’s and YA, where do you think the industry is strongest today?  What are we doing right for our great readers in YA and children’s?

AH: I think the children’s and YA industry is strongest in its cultivation of a YA “fandom”—a community of young readers who attend everything from BEA’s BookCon to YALLFest because they love YA books and want to meet the authors face-to-face.

These are passionate, thoughtful readers who know entire series inside and out—any Harry Potter fan knows what I mean—and I think publishers have managed to use marketing and social media, smart series branding, and those festivals to reach that eager readership that really did manifest in a new way with Harry Potter.

PP: And in terms of children’s and YA, where do you think we need to get better as an industry? What could we be doing that we aren’t? Social media has helped to elevate these voices and to shine a much-needed spotlight on this issue, but as I see it, the idea that young people only want to buy and read books about people who are like themselves—boys only reading books about boys, only gay readers wanting to read about gay characters—is so deeply entrenched in the culture that publishing a few more diverse books here and there isn’t going to solve the problem.

My author Noelle Stevenson has spoken about how the omnipresent bikini-clad Princess Leia cut-outs made her know she wasn’t the target audience—wasn’t welcome—in comic book stores growing up. My feeling is that many young people still have a similar experience in libraries and bookstores when they see a majority of books about white, straight characters.

“The children’s and YA industry is strongest in its cultivation of a YA ‘fandom.'”Andrew Harwell

PP: And where do you see your career in, say, five years?

AH: I’ll be editing books until I collapse at my keyboard! In the spring, I’ll also be co-teaching a course about YA lit through the New School MFA program, and I could see myself teaching in five years as well.

Hopefully I will have written another book or two of my own by then. Basically, I see myself doing the same things I’m doing today. I love what I do!