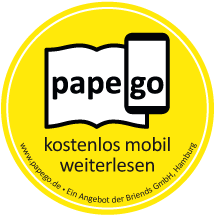 Papego is an app currently drawing attention in Germany from readers, publishers, and booksellers because it allows a reader an easy way to keep reading digitally or in print.

For Those Switching Between Print and Digital All a reader has to do is to download the free app, scan the page last read in a print book, and then the consumer is allowed to read up to 25 percent of the book on a mobile device, starting with the scanned page.

For readers, this technology is an easy way to switch between print and mobile reading, making a definite choice between the two versions unnecessary. While the app is free of charge for users, publishers have to make their books “papego-ready” and pay a small fee (about €0.03 per page) to Papego.

Sabine Glitza, chief sales manager with Kiepenheuer & Witsh says that for the publisher, “it’s all about customer benefit.

“To many of our readers, it’s beneficial to easily change between the printed and the digital version. Papego offers a thoughtful and comfortable solution for readers.” Von Wendt says he’s more than happy with the outcome: “For us it’s an enormous vote of confidence to be backed up by so many renowned publishing houses.

“This hopefully puts us in pole position for the forthcoming rollout.