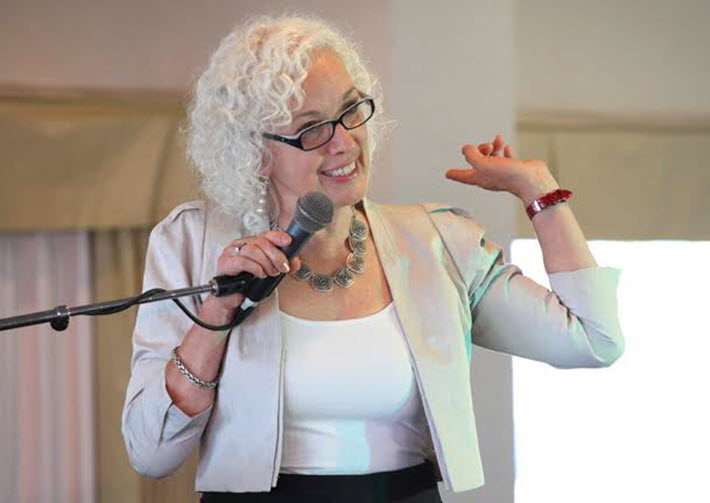 Like the leadership of the Authors Guild in the USA, a former chair of The Writers’ Union of Canada today talks of commonalities, not differences, between writers following traditional and independent paths to publication. In the States, the Guild’s recently expanded membership options include an “emerging writer” category for as-yet-unpublished authors. And in Canada, Merilyn Simonds urges self-publishers to see themselves as part of the larger industry. — Porter Anderson

‘Part of the Larger Publishing Ecosystem’

It’s always been difficult for writers to make a living from writing. According to Merilyn Simonds—former chair of The The Writers’ Union of Canada (TWUC) and a writer and editor with nearly 40 years in the business—this is the one constant in an ever-changing publishing ecosystem.

At the same time, she says, it’s never been a more exciting time to be a writer.

Simonds spoke to Publishing Perspectives about the changing landscape of publishing in Canada and the need, now more than ever, for writers to scan the horizon and be ready to adapt if they want to stay viable.

TWUC is Canada’s professional association of book authors, with more than 2,000 members. It offers professional development and acts as an advocate for writers with government interests—currently lobbying for a copyright-tax exemption for artists. The organization also works with publishers, developing standard contract terms and pursuing grievances. Simonds’ 2012–2013 term as chair coincided with Canada’s Copyright Modernization Act, which has dramatically reduced reproduction payments, as covered here at Publishing Perspectives, to educational publishers and to authors.

During her tenure, TWUC members voted to open the organization to self-published authors—a contentious and divisive move, she says.

“I was happy with the decision,” Simonds says, “although interestingly, not many [self-publishing authors] want to join. They’re not interested in issues like copyright, contracts, rights.

“There’s a divide between traditionally published and self-published writers, with defensiveness on both sides, and that’s too bad, because eventually the two are likely to merge. The ‘publisher’ as we know it may not be around much longer.”

“There’s a divide between traditionally published and self-published writers, with defensiveness on both sides, and that’s too bad, because eventually the two are likely to merge.”Merilyn Simonds

It’s also too bad, Simonds says, that these authors don’t recognize their common ground, because they can learn from each other.

“Writers who have traditionally published, for example, could learn from self-publishing authors the kind of energy and self-direction required to take personal charge of their writing careers, educating themselves in handling digital publishing tools and trying new things.

At the same time, she says, indie authors might recognize what publishers do. Unpleasant surprises can include “how hard it is to find an audience,” Simonds says, “and to get books into readers’ hands.”

Simonds offers a word of caution: “Self-publishing puts your head in the marketplace, and that’s no place for a writer’s creative process. You need to separate being a writer and being published.”

Publishing is an environment, an ecosystem, Simonds says, in which everyone is affected when one element changes within it. What many self-publishers may not recognize, she says, is that independent publishing isn’t its own environment. It’s part of the larger publishing ecosystem: “Eventually you’ll meet up with the edge of your pool.”

These are the kinds of changes writers need to be watching for. When the big publishers merge to create even larger entities that are more risk-averse than ever, writers may need to be able to see opportunities opening up to them elsewhere, perhaps in the independent arena.

Of course, not all writers have the time or skills or even the desire to produce a professional product, themselves.

Simonds has self-published previously published books that went out of print, as well as some unpublished stories. It’s a huge undertaking, she says, and if you don’t hire the right people to do layout, cover design, and editing, the end result will look as do-it-yourself as it is. That might have been okay in the early era of ebooks’ arrival, but design standards now are so high in both print and digital that for a self-published book to compete—and not severely disappoint its readers, Simonds says—the writer has to be willing to hire professionals.

“Learn to read contracts and understand rights. Writers are desperate to be published, and will accept bad terms.”Merilyn Simonds

For writers wanting to publish traditionally, she says, small and independent presses are where to look.

In Canada, there used to be many mid-size houses, but as mergers led to a surviving base of only a few large—and risk-averse—publishers, many smaller presses have matured and may also grow larger if they choose. This is, of course, an international phenomenon, and “in Canada, Penguin Random, Knopf, Doubleday, McClelland & Stewart are all under the Bertelsmann mega-umbrella,” Simonds says.

The big publishers won’t take on a book unless it’s a sure thing, she says. “They want sales of 10,000 in the first print run. Very few books will sell that well in the relatively small Canadian market.” The smaller publishers, however, will work with smaller print runs and as a result, “They’re getting submissions from really good, mature writers because the bigs won’t take them,” she says.

At the same time, grant funding from the Canada Council and Heritage Canada has increased and has been restructured “to break down silos between artists,” Simonds says, “and to reflect the way writers are working.”

With a focus on innovation and collaboration, she says, writers can access grants for more experimental work, which might include, for example, collaboration with multi- and digital media or with visual artists.

Grants Up. Reviews? Other Direction To be sure, these are positive developments. But what, in Simonds’ view, has changed dramatically to work against the interests of writers in Canada?

She doesn’t hesitate. “No media, no reviews.”

At one time with a new release there might have been “15 to 20 reviews by professional book reviewers across the country,” she says. “Now, we have just two national newspapers and the same review is reproduced dozens of times.”

There were newspapers, book TV, author tours in past years. But today, “All that’s left to promote books and authors is festivals and the Internet.”

And so what is Simonds’ advice to writers navigating the new landscape?

“Innovate, adapt, collaborate. It’s a fascinating time to be working in this industry. Don’t be afraid to try new things. Learn to read contracts and understand rights.”

Ebook royalty rates are very low, she says. “Writers are desperate to be published, and will accept bad terms.”

Nevertheless, she urges writers to embrace change. In her forthcoming book, Gutenberg’s Fingerprint: A Booklover Bridges the Digital Divide (ECW Press, Spring 2017), she traces developmental iterations of the book, from pages to pixels, and asks: “Why is it that we assume each new thing condemns what went before as obsolete? We know that’s not true.”

And after 40 years of work in the industry, what has surprised Simonds most?

“I think what surprises me is the endless potential. When I was younger, I thought that things were fixed” in place. “All I had to do was understand how they worked. [And] once I was being published by a major house, I thought that was it, I’d be published by them for the rest of my life, they’d bring me along, in that Max Perkins way.

“Now I realize that everything—not only humans but the structures they create and move within—are constantly in flux.

“It’s not only exciting, it’s heartening. I mean that in the literal sense: it fills my heart with delight and hope to see all those crazy new fish zipping about in the pool.”