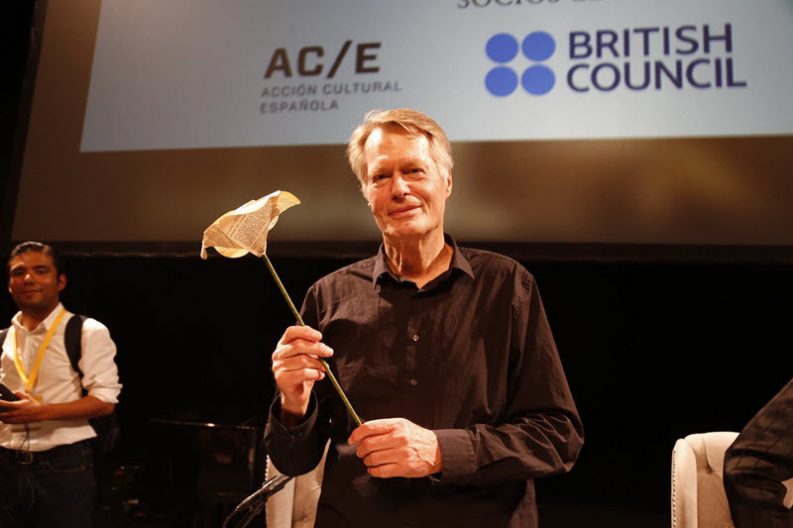 France’s 2008 Nobel Prize winner Jean-Marie Gustave Le Clézio spoke at the Hay Festival Querétaro about the function of literature, and ‘the resurgence of nationalism.’

“Europe’s future depends on its capacity to listen to other voices. And writers have the duty to denounce all forms of nationalism and racism.”Jean-Marie Gustave Le Clézio

This year’s Hay Festival Querétaro welcomed 2008 Nobel laureate Jean-Marie Gustave Le Clézio back to a city he hadn’t visited for more than 40 years.

The 76-year-old author of more than 40 works—comprising novels, short story collections, children’s books, essays and travel writing— Le Clézio spent time in Mexico and Central America in the early 1970s. He’s written about Mexico in more than a dozen essays, including The Mexican Dream, which focuses on Mesoamerican history and was published by University of Chicago Press in 1993.

Le Clézio has also translated a pre-Hispanic codex and the preface to the French edition of Mexican author Juan Rulfo’s short story collection The Plain in Flames.

“I spent an important part of my life in Mexico,” Le Clézio told Publishing Perspectives in Querétaro, recounting how he’d stop off in the city on his travels between the capital and the state of Michoacán, where he lived.

“Querétaro is a splendid city that should be better known,” he says, “or perhaps kept a secret, with an incredible history, both in the history of Mexico and of the world. The independence of Mexico [from Spain, in 1821] was a crucial episode in the liberation of colonized nations, and is part of world history, a part of which took place here.”

More people undoubtedly will visit, as the Hay Festival has confirmed that Querétaro will be a host city again in 2017.

Le Clézio also spoke of the importance of reading in his formative years. He cited the Spanish classic The Life of Lazarillo de Tormes and of His Fortunes and Adversities, published anonymously in 1554, describing it as “a fundamental text in Western literature.” And he mentioned Cervantes’ Don Quixote, whose main character he described as resembling a child who denounces the image that literature paints, of people living happily ever after.

“I was always interested in literature,” he said, “in those stories that told the experiences of a child discovering the evil and dangers of the world.

“For me, literature is a kind of antidote to vulgarity and to the easy answers that modern life sometimes offers us. Literature cannot be an illusion, it must be close to reality, and the time when we are closest to reality is during our childhood. There are monsters in our own families. Family life, with its insanity and its generosity, helps us to understand how life will be.”

After pursuing more experimental styles, Le Clézio shifted his focus in the mid-1970s to childhood and family matters.

“What I like about literature is that it portrays the adventure of life,” he said. “The most extraordinary and dramatic episodes of life, the most romantic part, takes place between 15 and 25 years of age, and that is the part that’s best suited to novels.” ‘I want to pass through walls and see and listen.’ Jean-Marie Gustave Le Clézio at Hay Festival Querétaro. Image: Provided by the festival

‘I Live With a Troupe of Puppets’

The ideal place for writing “could resemble a prison cell, but there are too many people in prisons for a writer to work. I write much better in solitary.”Jean-Marie Gustave Le Clézio

“Writing requires dedication,” said Le Clézio. “There’s something monastic about writing literature. For me the ideal place for writing is a room bereft of decoration, with an ordinary, white, wooden table, and with one window through which I can see a white wall. It could resemble a prison cell, but there are too many people in prisons for a writer to work. I write much better in solitary.

“I write on a blank page, and don’t use a computer, and that blank page is like a window open to the world, and when one is writing characters it is as if they were sitting here, one can hear their voices and see them in our minds. They have a huge physical presence, which is why I couldn’t say that writing is a solitary occupation. ”

“I live with a troop of puppets. When I’ve finished writing the novel they are still around and they come to visit me at night, like ghosts. It’s terrifying. There’s something crazy about literature, and it should be free of all conventions.”

To forget his pains and worries,  Le Clézio said he swims in the sea, with a mask and snorkel, to observe the marine life.

“It’s a writer’s obsession, to observe other lives, to find out what other people are doing in their houses. I want to pass through walls and see and listen. It’s like the work of a spy.” ‘The award can hide the writer.’ Jean-Marie Gustave Le Clézio at Hay Festival Querétaro. Image: Provided by the festival

‘The Aztecs Were the First Surrealists’

“Europe’s future depends on its capacity to listen to other voices, and that is a question of education.”Jean-Marie Gustave Le Clézio

“Surrealism was invented in Mexico,” he said. “It was called Stridentism, which was the first manifestation of surrealism in art, and the Aztecs were the first surrealists. There are many aesthetic and spiritual dimensions in Mexico, and it is where the the world’s first social revolution took place, in 1910.”

Le Clézio expressed his concern at the re-emergence of racism in Europe amid immigration, and his empathy for immigrants, as the son of a Mauritian father and married to a Moroccan.

“The future of Europe,” he said, “is a theme that provokes anxiety, and the resurgence of nationalism there has an ugly face and reminds one of what led to World War II; the hatred of foreigners, of immigrants, of those who are not part of the ‘pure race.’

“The myth of the ‘pure race’ is a very ugly aspect of European culture, it dates back to the Greeks. There was a racist and nationalist element in the works of Aristotle, an element that has emerged often in Europe, and it’s like a virus. I think Europe must take examples from other countries in the world, such as Mexico, which is a mixture of races, in which there’s been a mixture of thought and ideas, and where one ideology or way of thinking is not seen as superior to others.”

“Europe’s future depends on its capacity to listen to other voices, and that is a question of education. And writers have the duty to denounce all forms of nationalism and racism, writing and talking and participating,” he said.

“The disadvantage is that I am referred to as a Nobel prize-winner, and not as a writer. The award can hide the writer, and the writer can become a kind of statue.”Jean-Marie Gustave Le Clézio

Asked about current problems in Mexico, where organized crime, murders and disappearances have risen sharply since 2006, Le Clézio called on citizens to take a stand.

“Mexicans have the solution in their hands. Mexicans invented liberty and revolution, and now they need to invent the remedy for the country’s situation, because other counties will not do it for them. The US will do nothing, because it takes advantage of the immigration for cheap labor, and gives so little in return.”

In contrast to Doris Lessing—who was awarded the Nobel prize the year before Le Clézio and who famously bemoaned the accolade—the French author highlighted the fact that, as a literary prize and providing a financial reward, the writer is given the gift of time to write.

“And time is the greatest thing in life.

“The advantages are that I can travel,” he said. “The disadvantage is that I am referred to as a Nobel prize-winner, and not as a writer. The award can hide the writer, and the writer can become a kind of statue.”