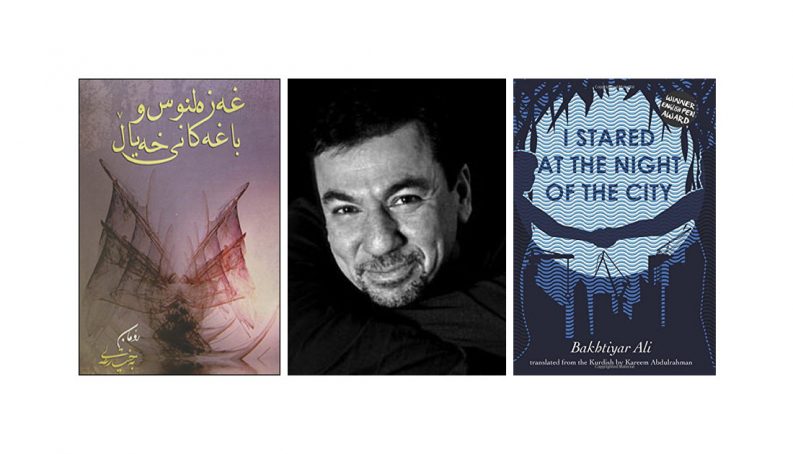 Talking of the ‘importance of literary translations in promoting Kurdish culture beyond the clichés,’ author and translator await the end of a long journey to publication.

Reporting for NRT —Nahia Radio and Television, based in Sulaimani in Iraqi Kurdiastan— Sarhang Hars writes that an English translation of a Kurdish novel by prominent author Bakhtyar Ali is to be published September 30 by Periscope, a UK-based independent publisher.”

This is reportedly the first Kurdish novel to be published in English.

Originally published in Kurdish in 2008 with the title Ghazalnus and the Gardens of Imagination, the 542-page novel, now titled I Stared at the Night of the City, has been translated by Kareem Abdulrahman, a London-based journalist and translator.

On its Web site, Periscope describes the book as:

“A trip, in more ways than one: a tale of extraordinary people traveling great distances, in their minds or with their feet. It is a lyrical interpretation of contemporary Kurdistan, so much in the news nowadays but otherwise so little understood. Told by several unreliable narrators in a kaleidoscope of fragments that all eventually cohere, the novel manages the neat trick of dipping readers into a fantasia just long enough before wrenching them back to hard, cold ‘real life.’”

The translation took several years to complete, in part because of the novel’s length, a lack of funding, and trouble finding a publisher.

Hars reports, “Both the writer and the translator have voiced criticism at the state of translation of Kurdish literature at a time when the Kurds have been widely covered in world media due to their involvement in the fight against the Islamic State (ISIS).”

Ali, currently based in Cologne, Germany, expresses feelings of “pessimism” responding to a question from NRT about what it feels like to have his novel being the first translated into English from Kurdish. “It is unfortunate that we still talk about this,” he says. “When a people has no translations and is unable to promote its culture, it does not exist.”

Tranlsator Abdulrahman says he shares Ali’s concerns, but at the same time is optimistic that this initial translation of a Kurdish novel into English will open the door for additional books and translators.

He tells NRT, “If the Kurds want more recognition in the world and to become an important player, they need to promote their arts and culture. Unfortunately, Kurdish ‘institutions’–in both the public and private sectors–and the Kurdish community in the West have done very little in this respect.”

For Abdulrahman, the translation was a labor of love that began when he first wrote about the book’s publication for BBC News in 2008. Later, he reviewed it for the Times Literary Supplement, which led to expressions of interest from publishers and a contract.

I Stared at the Night of the City tells the story of a group of people led by a poet, on a journey to find the bodies of two lovers who have been killed by the Kurdish authorities. In his 2008 review, Abdulrahman writes:

“The group includes a Hollywood film buff, who is leading some blind children on an imaginary sea voyage, a woman fleeing domestic violence, who weaves a beautiful carpet at a women’s shelter, and a former Peshmerga, an assassin turned pacifist.”

Speaking with the NRT, both Ali and Abdulrahman emphasize the “importance of literary translations in promoting Kurdish culture beyond the clichés and the superficial coverage of most media outlets.” Ali also criticizes literary institutions and the Kurds themselves for ignoring translations and work being done by translators in the West.

“Unfortunately, translators in Europe are not respected as they should be. Few translators make a living on translations. This can’t be done without institutional support” Ali tells NRT. “We should all demand and insist on establishing an organization promoting and translating Kurdish literature to other languages.”

Hars writes, “It appears that the conflicts in the Middle East, especially the fight against ISIS in Iraq and Syria highlighted in the world media by the siege of Kobane and the Sinjar massacre, have increased interest in Kurdish culture and society. However, the lack of literary translations means that much less is still known to the outside world about the Kurds beyond the regular editorial coverage and occasional in-depth reporting”

Or, as Abdulrahman tells Hars, “It’s time to move on from being viewed internationally as victims.”