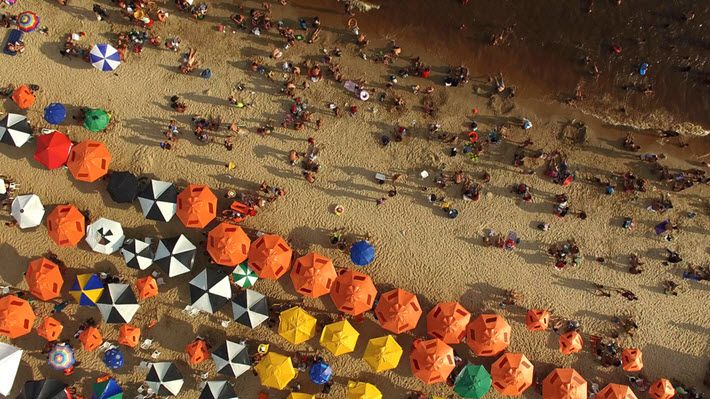 A children’s publisher, Karine Pansa wants to calm world industry concerns amid economic challenges. And she’d like to introduce the country’s ‘great diversity’ of literary talent to the world. A beach in Brazil near Rio. Image – iStockphoto: Gustavo Frazao

In our series with specialists (analysts, visionaries, and players) who will tackle issues in the seven pivotal publishing markets of Frankfurt Book Fair’s and Publishing Perspectives’ conference, we hear now from Karine Pansa of Brazil’s Girassol Brasil Edições, a children’s book publishing house. Pansa speaks on October 18 at Frankfurt Book Fair’s Business Club as the Brazilian delegation’s analyst in The Markets: Global Publishing Summit.

‘Calm Down the International Markets’

In our recent report by Adam Critchley, Brazilian Book Chamber figures echo the reality of a struggling market outlined by Publishing Perspectives’ Hannah Johnson in our free white paper on The Markets: Global Publishing Summit.

As Critchley wrote, “In 2015, the Brazilian publishing sector produced 447 million books, sold 389 million and reported revenues of 5.23 billion Brazilian reals (US$1.62 billion), according to the Institute for Economic Research and the National Union of Book Publishers.

“Compared to 2014, sales declined by 3.27 percent, but that’s a real decrease of 12.63 percent when factoring in consumer price index variation.

“Book production and sales dropped by 10.8 and 10.6 percent respectively. Book prices increased by 4.57 percent in nominal terms, a return to the downward trend begun some years ago but which had been interrupted in 2014.”

Even more dire, of course, has been the effect of Brazil’s economic crisis on government spending. As Critchley’s figures from the chamber has it: “Book sales to the government slumped by 14.9 percent, with no purchases for school libraries during 2015, something that has heavily impacted children’s book production: 33.5 million fewer copies reportedly have been printed compared to 2014’s output—a sign that the children’s book sector is critically dependent on government purchases for schools.”

And it’s against that background that we welcome Girassol Brasil Edições publisher Karine Pansa who was, as it happens, the second woman president (after Rosely M. Boschini) of the Brazilian chamber, serving separate terms 2009 to 2011 and 2011 to 2015.

She’s also a partner with Faro Editorial, a publisher of adult and young adult fiction.

We asked Pansa, as we ask all our speakers in our series of interviews ahead of The Markets,  where her three chief concerns lie as Frankfurt Book Fair nears. 1. Brazilian exports. “I believe the first concern,” Pansa tells Publishing Perspectives, “is to strengthen Brazil’s position as a quality publishing exporter to the world.

“That is essential. And when we speak of ‘publishing content,’ we mean copyright, print books, digital books, audiobooks, and so on.”

2. Visibility for Brazilian talent. “We also need to work,” she says, “on better publicity for contemporary Brazilian authors abroad.

“We have a great diversity of new writers, of great literary quality still unknown to international readers.

“Those readers end up never finding out about the new Brazilian literature that’s totally engaged with global themes, while still preserving its own characteristics.”

3. The perception of upheaval. “It’s also very important,” Pansa tells Publishing Perspectives “to calm down international markets by reassuring them of how serious the Brazilian publishing market and our business people are.

“The turbulent situation in the economy and in politics in Brazil ends up bringing uncertainty to international business leaders. We don’t want that to shadow the image of seriousness and commitment that our business people of the editorial markets have abroad.”

Publishing Perspectives: Is there some element of your work and background that helps you with your understanding of the market today?

Karine Pansa: I’ve been in the publishing sector for 23 years.

PP: And you’ve worked in literacy in your country, too?

KP: From 2009 to 2011, I was president of the Instituto Pró Livro (IPL), a nonprofit “civil society organization of public interest” and an NGO [non-governmental organization] dedicated to developing reading and literacy aspects in Brazil.

PP: And you’re you’re in the leadership with the International Publishers Association (IPA)?

In October 2012, I was elected to IPA’s executive committee for a two-year term, then re-elected last year. And in August 2014, I was invited by the ministry of culture and education to be on the board of directors for Brazil’s Plan for the Book and Literature. That’s a public guideline policy effort to promote reading habits and to develop our libraries.

Correction: This story has been updated to reflect the fact that Karine Pansa was the second woman president of the Brazilian Book Chamber. The first was Rosely M. Boschini, the publisher of Editora Gente. Our thanks to Antonio Erivan Gomes for the good catch.