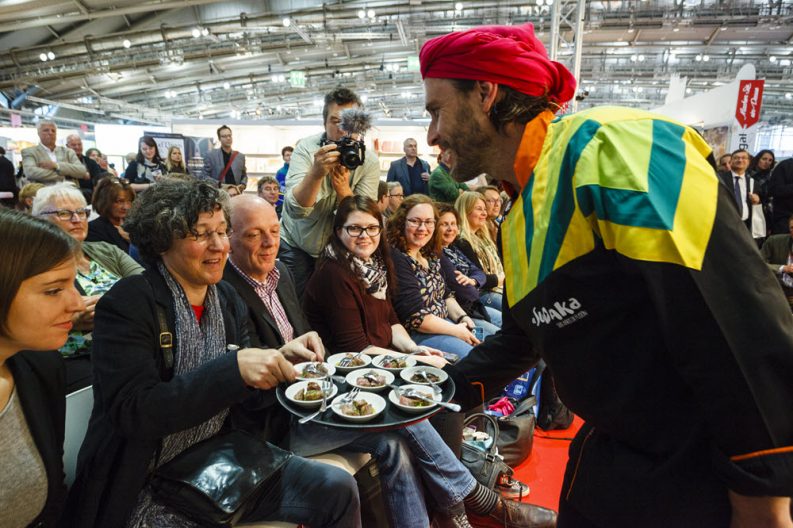 Sometimes referred to as ‘the area of indulgence’ at Frankfurt Book Fair, the Gourmet Gallery combines cookbook publishing and foodie-wooing events in Hall 3.1. One of the Most-Visited Halls of the Fair

A fair-within-a-fair, “the place to be a foodie” features 1,000 square meters of space dedicated to the displays of some 80 exhibitors from more than 20 countries, all focused on cookbooks, in Hall 3.1.

Newcomer nations to the roster of Gourmet Gallery exhibitors this year include Jamaica, Kurdistan, Brazil, Australia, New Zealand, the USA, Japan, and Sweden. The overall presentation is expected to feature around 1,000 titles. The most active part of the scene, of course, is the Show Kitchen and Gourmet Salon, staged in a partnership with Gourmand International, the company behind the Gourmand World Cookbook Awards.

It may surprise visitors from the USA that cooks in Germany haven’t traditionally used measuring cups. Their popularity is growing, according to a news release from the Book Fair, and this is to be reflected in a baking event with Birgit Wenz of Becherkueche.de, in the Show Kitchen on the Fair’s Sunday, October 23.

At 11.30 a.m. on that day, the program will also feature Nadia Qani’s ZAN society, the intent of which is to promote Afghan women’s rights. Once a month, Qani cooks and eats together with refugees in Offenbach am Main and in this instance, she’ll do so at Frankfurt’s Gourmet Salon.

Miele is the premium partner of the Gourmet Gallery, as it has been since 2011.

The Frankfurter Buchmesse site has more information on the Gourmet Gallery here. In other international cookbook news, Quarto Publishing Group USA has announced that profits from its latest Burgess Lea Press cookbook are to be donated to the Stone Barns Center for Food and Agriculture.

Dean Carlson is the author of Field & Feast, the new title, which features 100 recipes from the restaurant at Wyebrook Farm, Pennsylvania. Stone Barns Center, according to a news release from Quarto, is focused on developing “a culture of eating based on what farms need to grow to build healthy soil and a resilient ecosystem.”

In its prepared statement, Quarto says that Stone Barns “experiments with and improves sustainable farming practices; trains beginning farmers in resilient, regenerative farming techniques; helps children discover the sources of their food while preparing them to steward the land that provides it; and increases public awareness of healthy, seasonal, and sustainable food.”