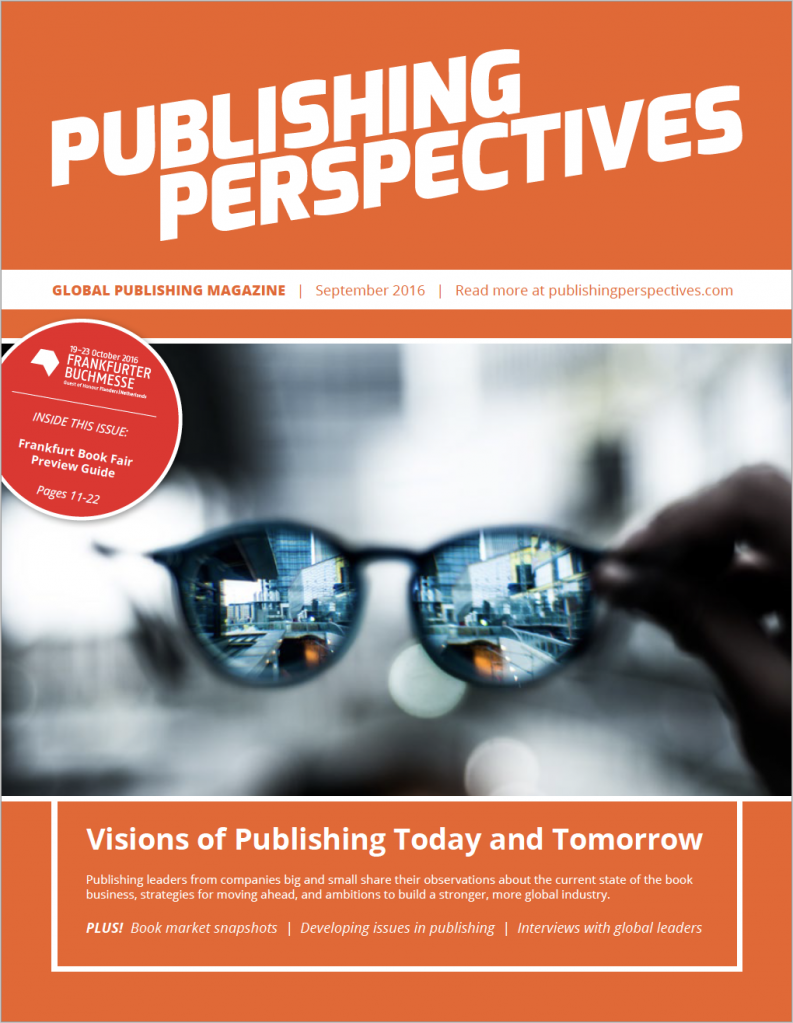 In this issue of Publishing Perspectives Magazine, publishing leaders tell us how they see the book business today and tomorrow. Plus, read our special preview guide to the 2016 Frankfurt Book Fair. This week, Publishing Perspectives is releasing our 2016 Fall Magazine under the theme, “Visions of Publishing Today and Tomorrow.”

Riding the wave of energy that comes with the fall season in book publishing, we asked leaders in the global book business for their insights. In this issue, CEOs and publishers tell us how they see the publishing industry today and how it might evolve in the future.

We’ve also gathered snapshots of developing stories across the globe, as well as an exclusive Preview Guide to the 2016 Frankfurt Book Fair.

As a truly international business, publishing is subject to the political and economic upheavals around the world. While that can sometimes be daunting, PP’s editor-in-chief, Porter Anderson, reminds us in his editorial of the strong community spirit in the book business:

“As you’ll read in the comments of many of our global book industry leaders here, the United Kingdom’s vote to leave the European Union is a daunting development few foresaw when we were together last year in Frankfurt. As Penguin Random House UK CEO Tom Weldon tells us, ‘If there is anything that the summer of 2016 has reminded us, it is that change is the new normal and that market disruptors can come from anywhere.’

“What’s heartening, however, as we’ve spoken to players in so many parts of the world, is a ready sense of response. ‘Neither our lists nor the platforms on which they are published can stand still,’ says Hachette UK CEO Tim Hely Hutchinson.

“As if in answer, Abuja-based publisher Bibi Bakare-Yusuf at Cassava Republic talks of charging ahead with book sales on mobile devices: Nigeria is mobile. And Nigeria is reading.

“In Barcelona, Grupo Planeta’s articulate digital director Santos Palazzi has become an advocate of better exploiting intellectual property, generating film and television deals from Planeta’s vast list, even in a recovering Spanish market that has lost as much as 40 percent of its sales.

“From the insights of former Soviet publishers—in Russia, Ukraine, Belarus, Kazakhstan, Georgia, and Armenia—to the powerful messages of the seven pivotal regions to be spotlighted on October 18 in The Markets: Global Publishing Summit, what we hear this year is determination, creative concern, and real collegial response: we’re all in this together, our interviewees are telling us.

“As our colleague Juergen Boos, Director of the Frankfurt Book Fair, reminds us in his own commentary, we must ‘support our friends and colleagues on both sides of the border’ in this shifting European landscape; and we must prioritize ‘a safe environment’ for our business meetings in Frankfurt.”