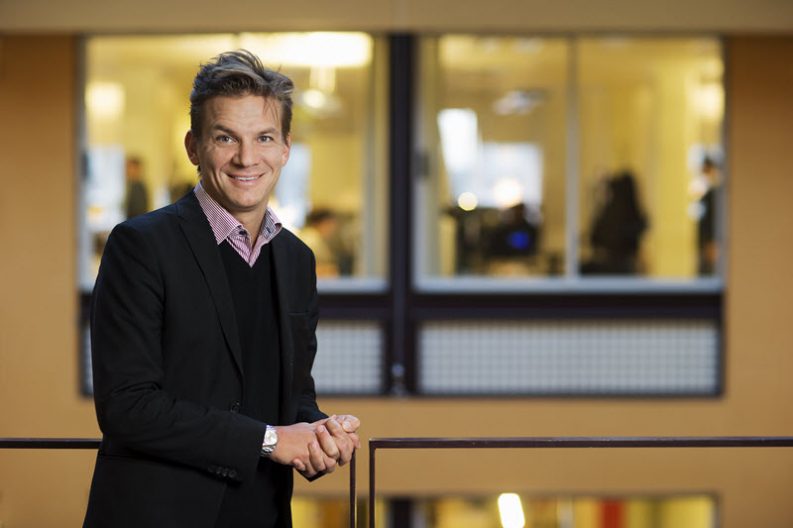 The book business hasn’t suffered disruption as dramatic as that of other industries, says Jacob Dalborg. The ‘core publishing activities of acquiring, editing and publishing stories’ are resilient. Bonnier Books’ Jacob Dalborg headlines Frankfurt Book Fair’s CEO Talk at the Business Club in Hall 4 at 2 p.m. on Wednesday, October 19. We’re glad to have this interview with him in which he addresses, among other things, competition from the very media that might help publishers sell books: ‘Our job has never been to publish as many books as possible.’ — Porter Anderson

Ahead of his CEO Talk interview at Frankfurt Book Fair’s Business Club on October 19, Publishing Perspectives asked for his views on the industry from where he sits in Bonnier’s top management in Stockholm.

Publishing Perspectives: After years of noise about digital disruption, does 2016 seem quieter in publishing?

“Our strength is our knowledge, skills and professionalism around book publishing. If we let that fall out of sight, we will lose everything, including our credibility.”Jacob Dalborg

Jacob Dalborg: I think everyone has come to terms with the fact that digitization is not necessarily evil. It’s generally accepted that it carries great opportunity.

The term “disruption” itself, when used in a publishing context, is in my opinion more often just a buzzword than a statement of facts. In reality, e.g. digital commerce only represent more selling points, not something very new and different from what we have always dealt with.

I think of publishing as a storytelling business before anything else. Our job has never been to publish as many books as possible, but to find and publish exactly the right books and to develop authors and authorships.

In that sense, I am not even sure we have had any dramatic disruption in the proper sense of that word. People love to read stories, and they always have. Actually, people read and write more than they have ever done before. They read books and everything else. The format in which we publish our stories does not–and should not–matter that much to us or to our readers. I belong to those who actually believe that content is king.

PP: Ebooks, e-readers and mobile devices, as well as large-scale retailers like Amazon have all changed the business over the last decade. Where do you think the most important innovation takes place today?

“A publisher will never be able to make a game version of a book as well as the game industry. This is why we shouldn’t spend our resources making half-hearted hybrid products like interactive ebooks.”Jacob Dalborg

JD: Typically, it’s not in the products themselves that you’ll find the innovation. There are of course still improvements to be done and changes to be made. As a publisher, I love ebooks because once they’re produced, you have them available forever, they have no inventory. However, the core publishing activities of acquiring, editing and publishing stories remain the same. To the consumer, the reading experience is not very different.

Nevertheless, I see lots of potential for innovation in audiobooks. Getting rid of the physical CD has already made both distribution and consumption so much easier and more convenient than it was. We now have the possibility of creating truly new ways of consuming. That could mean, for example, using a slightly augmented reading speed for those who have otherwise been too impatient to follow a narrator’s pace. It could also be an intelligent use of the snooze functionality, among other things, allowing you to fall asleep while listening.

I think audio holds a lot of this type of promise, not least for new readers. As a special case, there could be a market for abbreviated audiobooks for immigrants wanting to learn about a new language and culture.

Another area where innovation can significantly add value is in developing and optimizing internal processes for production, distribution and inventory management.

Especially in small and linguistically closed markets like the Nordic countries, inefficiency is a serious challenge for publishers. A bestseller in Germany means 4 million copies sold, whereas the same in Finland represents a unit sale of only 60.000 copies. You don’t see the same difference in resources spent on tools and operations. The important evolution (and I don’t mean revolution) is to keep striving to do better internally.

PP: You mentioned that people write more than they ever have. Will you share your thoughts on self-publishing?

“I believe that it’s not the medium itself but more likely Amazon’s persistent pushing of ebooks to the market that has caused the growth of market shares in the US, the UK, and Germany.”Jacob Dalborg

JD: Unfortunately, self-published books don’t figure into industry statistics. That would help us estimate the actual effect of it.

As we’ve traditionally worked in a market of carefully selected ranges of titles, it’s clear that the abundant number of titles “out there” is a new kind of challenge for publishers. How can we stay top-of-mind in this significantly larger amount of content?

In addition, all publishers should definitely look into the self-published market to identify the best authors and offer them their core service of author development. I am sure that we’re missing several good authors right now.

Finally, I would recommend anybody whose book has been rejected by a publisher or an agent, to self-publish. That will give you all the tools you need to build your own brand and reader relations and it can get you both feedback and attention. A publisher might find you and contact you.

‘Books Have Always Been Mobile’

PP: It’s often said that publishers should learn from other industries like the music industry, television or newspapers. How relevant do you find this advice? Is it just a cliché or are there major lessons there for us?

“Only in English-speaking countries do we see the ebook market share at about 20 to 25 percent. In Germany, ebooks have about 10 percent of the market, and everywhere else, it’s below 5 percent.”Jacob Dalborg

JD: To answer that question, it’s important to take the differences between the industries into account. You might say that those other industries were more truly disrupted by digitization and the advent of the Internet.

The news industry–and of course printed newspapers in particular–have been challenged by the immediacy of Internet distribution. Where distribution of news in the broadest sense followed fixed schedules and either publication or broadcast at regular intervals, they’re now distributed everywhere as soon as something happens. I remember watching football on Swedish national television as a kid every Saturday afternoon. This was the only chance to follow the matches you had all week. Today, I can find non-stop football whenver I want it, on specialized channels or aggregated by services like HBO.

When it comes to music, film and television, their consumption were bound to stationary devices like gramophones, TVs or cinemas. The ability to carry them with you and watch or listen on a truly portable device has seriously changed the demand and behavior around those products.

But none of these phenomena has had a huge importance for books.

First, their production time can be very long and most often they don’t lose their relevance if they’re not published on a specific date.

Second, books have always been mobile. The promise of carrying “hundreds of books” with you on your Kindle is fine, but maybe not very relevant. Most people are happy with bringing a few paperbacks with them on vacation. Therefore, ebooks don’t constitute a very different experience for the readers. That may very well be the reason that the market share of ebooks isn’t growing so fast.

Only in English-speaking countries do we see the ebook market share at about 20 to 25 percent. In Germany, ebooks have about 10 percent of the market, and everywhere else, it’s below 5 percent. I believe that it’s not the medium itself but more likely Amazon’s persistent pushing of ebooks to the market that has caused the growth of market shares in the US, the UK, and Germany.

PP: But we do see that media companies tend to blend different formats more nowadays and thus become more like each other.

“HBO’s A Game of Thrones series is our best friend…[but] the challenge is of course to win the constant fight for attention. You have to figure out how to stay top-of-mind for the consumer.”Jacob Dalborg

JD: I’m convinced that a publisher will never be able to make a game version of a book as well as the game industry. This is why we shouldn’t spend our resources making half-hearted hybrid products like interactive ebooks. Dedicated game developers would beat us by lengths.

Our strength is our knowledge, skills and professionalism around book publishing. If we let that fall out of sight, we will lose everything, including our credibility.

But having said that, I think it should be part of a publisher’s responsibility to consider and decide whether a game or movie version of a manuscript would be a good idea, and if so to facilitate contact with companies in the relevant industries, for example, through partnerships.

It follows that you must also be able to decline an author’s wish to see his or her book in a movie version. The ability to pick exactly the right manuscript goes hand-in-hand with the traditional task of finding and publishing the right books. That is a skill publishers already have in-house.

A publisher should focus on developing author careers. Facilitating stories’ transformations into other media expressions should be a natural part of the service an author can expect from his publisher: bringing these stories to the attention of their audience, in whichever relevant form.

PP: Do you fear the competition from a game or movie version?

“Publishers should engage in relations with their readers and customers…To stay relevant, this must be part of the skillset in a publishing house.”Jacob Dalborg

JD: On the contrary. HBO’s A Game of Thrones series is our best friend. The great storytelling of the TV series generates higher book sales. However, the challenge is of course to win the constant fight for attention. You have to figure out how to stay top-of-mind for the consumer. Publishers must therefore seek to understand consumer’s needs and behavior, in order to bring books to their attention.

PP: Do you mean that publishers should focus more on gathering and exploiting user behavior data? These data are typically the property of retailers and subscription services.

JD: Yes, partly. These data are of course of great importance. I actually believe that both retailers and publishers would have benefits, if retailers were willing to share such data.

However, publishers themselves should also engage in relations with their readers and customers, for example through community building around author careers, brands or series. To stay relevant, this must be part of the skillset in a publishing house.

PP: As Netflix does regularly, Storytel has announced their plans to produce and publish exclusive content. Is that a threat to traditional content providers, including publishers?

JD: I don’t think so. When Netflix comes out with a high-profile series like House of Cards, it already has a huge, global audience waiting for it. My guess is that for a book, the very restriction of the number of sales channels would be a problem. The economy alone [in a subscription service] would be very, very much smaller.

In addition, the fact, that not that many people read ebooks speaks against it. It would probably be difficult to find an author who would be willing to restrict the sales of his or her books to a single channel. It’s hard to imagine an author seeing value in this model. It would be hard to develop an author’s branding with access to sales channels permanently restricted.

However, I do believe that in the future we’ll see content with time-limited retailer exclusivity.