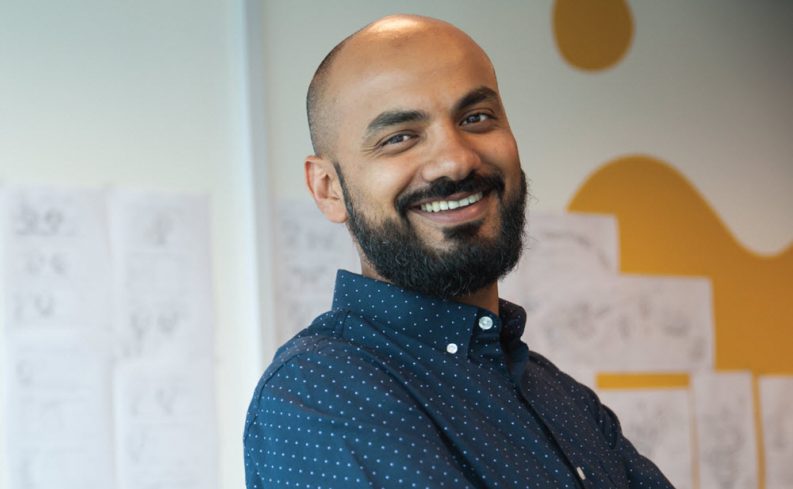 Driven by ‘a responsibility to encourage children to read and learn,’ Badr Ward and his Lamsa team offer a multimedia app for Arabic-language kids and parents. To ‘nurture and improve a child’s nature.’ Badr Ward of Lamsa

In our series with specialists (analysts, visionaries, and players) who will tackle issues in the seven pivotal publishing markets of Frankfurt Book Fair’s and Publishing Perspectives’ conference, we hear now from Badr Ward of the UAE’s Arabic digital reading platform for children. He’ll speak as a player in that country’s publishing industry at The Markets: Global Publishing Summit on October 18.

‘The Best Writers and Publishing Houses’

As the Sheikha Bodour bint Sultan Al Qasimi and Ahmed Al Ameri have told us in their interviews for The Markets: Global Publishing Summit, the Arabic reading market is a youthful one, full of inquisitive young minds.

And, as Hannah Johnson reports in our free white paper on The Markets’ highlighted regions, the United Arab Emirates has every reason to capitalize on that growing demand. “The country boasts a literacy rate of 93 percent,” Johnson writes, “and high penetration of Internet access at 92 percent. “The current value of the UAE’s book market at €250 million ($283 million) is expected to grow in coming years.”

Badr Ward is the founding CEO of Lamsa, which is described as the first and leading Arabic digital reading platform for children. At both Google Play and Apple’s App Store, Lamsa ranks as a top application for children across more than 10 Arabic markets, serving more than 6 million Arabic-speaking children worldwide.

We open our exchange with Ward by asking about key points he’d like to bring forward, based on his own experience in the UAE market.

Three Elements of the Lamsa Approach

1. Responsibility to the readership. “Lamsa sees a responsibility to encourage children to want to read and learn,” Ward tells Publishing Perspectives, “as opposed to spending many a futile hour on unedifying technological content. This is the main objective.

“However, we are currently living in a time when people are having an increasingly extreme relationship with technology.  We are either adamantly against its effects in our lives and take measures to boycott it where possible. Or we are inextricably bound to its mastery and appear as though we are slaves to its convenience.

“Here at Lamsa, we think that education happens when we marry the two together and create a balance,” says Ward. “We want to be at the frontline of technological advancement and witness the fruits of ingenuity. And we want to share that with children who are limited so that they can start to learn to think outside the box.

“We want to use technology as a tool for children to fall in love with what’s around them.

“One method by which we can achieve this is through our use of augmented reality (AR). We’ve managed to develop the technological capabilities to allow a child to use a phone or tablet to point at Lamsa’s published hardback books and have the characters spring out from the pages before their very eyes. An example of this is the book Calm Down Hani, a unique Lamsa-produced and -published book to accompany the app. Using AR in this way, we can ignite an imagination that brings characters to life without the use of AR, too.” An image from the Lamsa app

2. Pride in Arabic culture and language. “This is a hurdle,” Ward says, “that has been difficult to overcome, considering international competition from a focus on communities that don’t resemble Arab children’s environment.

“Lamsa hopes to kindle an interest in the Arabic language, for all of its richness and intricate nuances, in children of all nationalities. Arabic provides a wealth of diplomatic, economic, and trade opportunities for those who might otherwise consider themselves incongruous to the culture.

“We attach significant attention to the ecosystem of players in the field, in order to establish a quality of content that not only truly resembles the Arab world, but also celebrates international trends and technological and artistic advancements.

“One of the obstacles Lamsa has had to overcome is helping regional writers and illustrators adjust their artistic work to the digital world. Lamsa cultivates a close relationship with our writers and artists in order to train and enhance their capacities without jeopardizing their artistic identities. Much of the content on the platform is produced internally. We’re responsive to the user’s immediate needs.

“For this reason, we cherry-pick the best writers and publishing houses from across the region—some already eminent in the industry, and others of them emerging.

“This,” Ward tells Publishing Perspectives, “means that the stories and writing styles are diverse and thus more likely to grab a variety of children’s attention.

“That range incorporates the miscellany of the Arabic language, from classic Arabic to language used daily to varying dialects used by more than 400 million speakers worldwide. While classic Arabic can present a range of problems for a child within it ensuing complexities, it can often be difficult for children to digest in the early development years. We notice this to be a challenge and Lamsa have since strategized to tackle this problem by coercing with specialists in order to provide a comprehensive language closer to every day language without compromising on the richness Arabic has to offer.” An image from the Lamsa app

To address the former, the app presents plenty of opportunities within the content itself for the child to complete the task with a parent present. This way Lamsa enriches the parent-child relationship and allows the parent to monitor and supervise a child’s educational progress.

And as an investment, the app gives a child access to hundreds of titles in classic literature, games, activities, and videos.

‘We Want This To Be a Movement’

An image from the LamsaWorld.com site

Publishing Perspectives: How does the Lamsa content and app answer needs you see in traditional education?

Badr Ward: Our education system places so much emphasis on writing and repetition that it creates negative connotations with the word learn in children’s minds. But when we take technology and make it possible for children to learn through playing and exploring and creating, they’ll carry that with them for the rest of their lives.

PP: How would you describe the way Lamsa-like technology can support traditional educational approaches?

BW: An education system should nurture and improve on a child’s nature.

PP: In other words, a good educational approach capitalizes on the child’s natural capabilities.

BW: There’s a saying: “Everybody is a genius, but if you judge a fish by its ability to climb a tree, then it will spend its whole life believing itself to be stupid.”

PP: What would it take for approaches like Lamsa’s to be more readily adopted on a wider basis?

BW: Before we can use our technology effectively as a tool, a culture must understand that exploration, innovation, and creativity are vital to a child’s development. It’s for this reason that we want to be more than just a company that educates through technology. We want this to be a movement.

Here’s a promotional video, in Arabic, about Lamsa and how children interact with its technology.