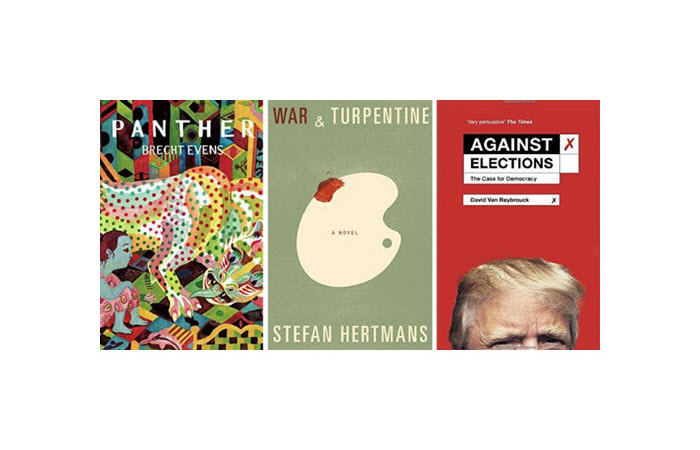 Flanders and The Netherlands, the 2016 Guest of Honor at the Frankfurt Book Fair, have made literary in-roads in English this year, surely with more to come. In 2016, a number of top-notch Flemish and Dutch books are being published in English, and these translations coincide with Flanders and the Netherlands’ turn as Guest of Honor at the Frankfurt Book Fair.

On September 22, Flanders House in New York hosted a networking event to preview the Guest of Honor program and to showcase the literature from these two regions. Victor Schiferli of the Foundation for Dutch Literature and Michiel Scharpé of the Flemish Literature Fund were there to spread the word about the literature of this year’s guest of honor in the US and the activities of their organizations.

Both the Dutch Foundation for Literature and the Flemish Literature Fund offer translation grants, as well as translator databases, lists of newly released titles, and news from their respective publishing markets. Schiferli and Scharpé invited editors and publishers looking for more information Dutch-speaking authors to get in touch year-round.

For any English-language readers who want to get to know Flanders and The Netherlands before the Frankfurt Book Fair, here are selected books from each market to delve into:

Flemish Books in English – a selection: The Man I Became by Peter Verhelst was published by boutique publishing house Peirene Press. This fable about civilization was translated by David Colmer, who also translated Dimitri Verhulst’s The Latecomer, published by Portobello at around the same time. The Latecomer is a hilarious and, at times, bitter novel about an elderly man who fakes dementia to escape from his domineering wife. It is the fifth book by Dimitri Verhulst—best known for his hit The Misfortunates (published in the US by Thomas Dunne Books)—to be published in English.

Undoubtedly one of the greatest talents of the new generation of Flemish graphic novelists is Brecht Evens. His two previous graphic novels, also published by Drawn & Quaterly (Montréal), were nominated for multiple Eisner Awards. Still only 30 years old, his latest graphic novel Panther takes a new step in graphical and narrative audacity. The end of June saw the publication of the long-awaited English translation of the most successful Flemish novel of recent years: War and Turpentine by Stefan Hertmans. This novel, based on the diary that the author’s grandfather kept as a soldier on the front during World War I, has been on the Flemish bestseller lists since its publication in September 2013, with the rights sold to more than 15 countries. The English translation by David McKay is published by Harvill Secker (UK), Knopf (USA) and Text (Australia and New Zealand). The novel has been well received in the English-language press. The Guardian claimed it “has all the markings of a future classic”, and The New York Times Book Review said it “delivers a blast of narrative fresh air”.

Summer also saw a new translation of Flanders’ leading nonfiction author David Van Reybrouck, who had a hit in multiple countries with his previous book on the Congo (published in the US by HarperCollins). His latest book, Against Elections, translated by Liz Waters and published by The Bodley Head (Penguin Random House), scrutinizes the critical state of democracy. In Germany, the book the book already made it onto the bestseller lists and earned Van Reybrouck an extensive interview in Der Spiegel.

Dutch Books in English – a selection: The first-ever English translation of The Evenings by Gerard Reve comes out with Pushkin Press in October. This 1947 Dutch classic has been compared to The Catcher in the Rye, and it has inspired generations of teens and literature lovers. Reve, who died ten years ago, still counts as a literary hero in The Netherlands but was not widely translated during his lifetime. This translation is by Sam Garrett, who has also translated Herman Koch.

The new novel by Herman Koch, Dear Mr. M, was translated by Sam Garrett and published by Crown Hogarth in September. At the same time, Koch’s latest novel, The Ditch, has also just been released in Dutch. Dear Mr. M is Koch’s most literary work and tells a story about writing and murder. It’s a stylish literary thriller presented from five different perspectives. Fans of The Dinner and Summer House with Swimming Pool — Stephen King, for one — will recognize Koch’s twisted cast of characters and trademark black humor. The first volume of Guus Kuijer’s The Bible for Unbelievers, translated by Laura Watkinson will be released in English by Seven Stories Press on October 18, just days before the Frankfurt Book Fair starts. With humor and occasional irreverence, this quirky book aims to make The Bible accessible for the twenty-first century, and for “unbelievers,” or “people who are ready to appreciate it as something other than a sacred text.” This first volume explores the Book of Genesis from an agnostic point of view.

Flemish Books Translated into English in 2016

Dutch Books Translated into English in 2016