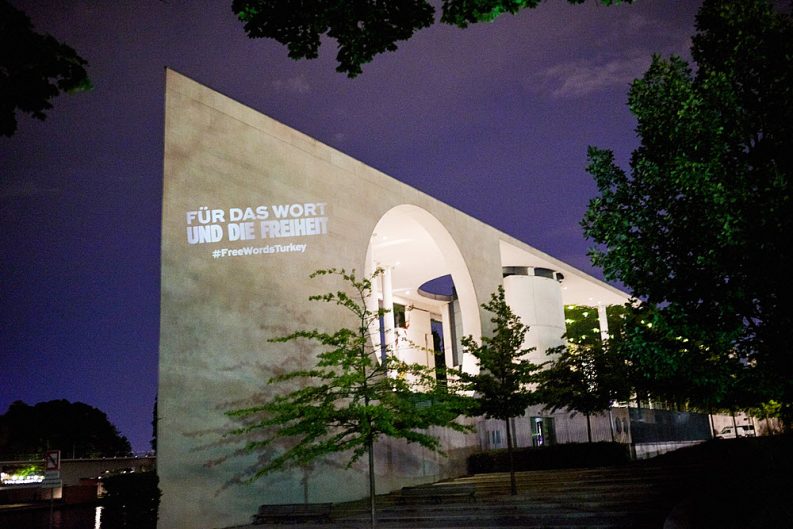 Saying ‘the German Government and the EU Commission simply cannot be silent on this subject any longer,’ Germany’s publishing leadership supports #FreeWordsTurkey. ‘A Massive Attack on Freedom of Expression’ The petition is rapidly gaining backers.

With the hashtag #FreeWordsTurkey, the effort highlights the plight of 29 publishers in Turkey, reportedly silenced in the aftermath of the July events, along with—per BBC News—three news agencies, 16 television channels, 23 radio stations, 45 newspapers, and 15 magazines.

For its part, the IPA is focusing on a demand for the release of jailed Turkish novelist Aslı Erdoğan, who was “taken into custody with 24 other journalists and staffers from pro-Kurdish opposition daily newspaper Özgür Gündem,” the IPA writes. “The newspaper was also shut down under Turkey’s ongoing state of emergency, which was triggered by the failed 15 July coup d’état.. Twenty-two of those journalists have since been released, while Aslı Erdoğan, Editor-in-Chief Zana Kaya and Chief Editor İnan Kızılkaya are still behind bars.”

“We cannot allow freedom of expression to be undermined or instrumentalized for reasons of political expediency.”Alexander Skipis

The German petition—available here in English, German, and Turkish—calls specifically on German Chancellor Angela Merkel and European Union Commission President Jean-Claude Juncker to lead the German federal government and the EU Commission to “a clear and resolute position on the current state of freedom of expression in Turkey.”

“We also urge these two bodies,” the text of the petition reads, “to call for an uncompromising respect for freedom of expression in any related decisions, actions and statements they make. It should not be negotiable.

“When freedom of expression comes under attack and is subject to massive restrictions in Turkey and other countries throughout the world, the German federal government and the EU Commission are obliged to re-evaluate their policies with regard to the countries in question,” the petition authors write.

“Germany is also obliged to provide quick aid to those journalists and authors affected by restrictions to freedom of expression, for instance by issuing non-bureaucratic emergency visas.” In a prepared statement, Alexander Skipis, the Börsenverein’s managing director, is quoted saying, “The Turkish government has unleashed a massive attack on freedom of expression.

“The German Government and the EU Commission simply cannot be silent on this subject any longer.

“Politicians and governments have an obligation to confirm their uncompromising commitment to this basic right. We cannot allow freedom of expression to be undermined or instrumentalized for reasons of political expediency.

“We need to work together to break this silence and send out a clear signal of support for freedom of expression.”

Speaking for PEN Center Germany, its vice-president, Sascha Feuchert, is quoted saying, “The arrests, intimidation and limitations placed on authors in Turkey must stop immediately. We have the right and the duty to fight for colleagues, because targeted measures against the press and freedom of expression not only jeopardize Turkish democracy but also are contributed to by the inaction regarding these events and values.”

And Reporters Without Borders CEO Michael Rediske’s statement reads: “Silence in considering the situation in Turkey is not an option. The stand now is against mass persecution of journalists and writers. Persecuted Turkish media creative workers need our solidarity and practical support.”

At this writing, the petition has attracted more than 33,600 supporters.

Here is a video message produced (in German) with Skipis of the Börsenverein: